The Peerless Prognosticator is ON THE AIR!!! -- Game 18: Capitals at Jets, November 14th

The Washington Capitals take the ice on Wednesday night in the back half of their third back-to-back set of games this season when they visit the Winnipeg Jets at Bell MTS Place.  The Caps will be taking on the Jets fresh off their contest on Tuesday night in Minnesota against the Wild (not yet played when this was published).

Winnipeg is showing signs of coming out of a rut they were in over a two week period in which they alternated wins and losses (2-3-0).  Wins in consecutive games at home over the Colorado Avalanche and New Jersey Devils gave the Jets consecutive wins for the first time since they had a three-game winning streak in Games 7-9 in mid-October.

The Jets have been formidable on home ice, though, going 7-2-1 in ten games so far.  That is due in large part to right winger Blake Wheeler treating teammates like Oprah Winfrey treated studio audience guests… “YOU get a goal….and YOU get a goal…and YOU get a goal…”  Wheeler has 14 assists in ten home games so far, the most of any player in the league in games played on home ice (Nicklas Backstrom and Thomas Chabot have 11 apiece).  This is hardly new for Wheeler.  Since 2011-2012, when the Jets moved from Atlanta to Winnipeg, no player in the league has more assists on home ice than Wheeler, who is tied with Philadelphia’s Claude Giroux with 204 helpers.  He already has four multi-assist games on home ice this season, tied for the league lead with three other players (one of them is Washington’s John Carlson).  Only once in ten home games so far this season has he failed to record a point, and that coming in a 5-4 overtime loss to the Edmonton Oilers on October 16th.  Wheeler is 5-12-17, plus-5, in 33 career games against the Caps.

Dustin Byfuglien has more goals (120) than any defenseman in Winnipeg Jets history, including the years spent in Atlanta as the Thrashers.  That goal total is more than twice as many goals as Toby Enstrom (54), and his 398 career points with the club are 90 more than Enstrom.  Byfuglien’s 24 game winning goals are almost as many as the next five players on the list of defensemen (Enstrom, Yannick Tremblay, Jacob Trouba, Franitsek Kaberle, and Andy Sutton combined for 26).  He has displayed an odd consistency in his game with respect to recognition. Over his first seven seasons in Winnipeg after moving from Atlanta, he finished between 11th and 15th in all-star voting among defensemen and between 12th and 15th in Norris Trophy voting six times apiece (he was shut out from both in 2013-2014).  He missed a pair of games to an upper body injury in mid-October, but he still leads all Winnipeg defensemen in overall scoring so far (2-11-13).  In 29 career games against the Capitals, Byfuglien is 5-13-18, minus-6.

Connor Hellebuyck was supposed to be the next big thing in goaltending this season.  Coming off a season in which he led the league in wins (44), posted a 2.36 goals against average and a .924 save percentage, and finished second in both all-star voting at the position and in the Vezina Trophy voting, it seemed that all that was left for him was to take the next step and backstop the Jets to a Stanley Cup final this season.  Things have not started smoothly on that journey, though.  He came out of the starting blocks inconsistent, going 4-3-1, 2.99, .907 in his first eight appearances.  He has given recent indications of finding his footing, though, going 3-2-0, 2.63, .919 in his last five appearances.  However, he still ranks 28th among 46 goalies with at least 300 minutes in goals against average overall (2.86) and 22nd in save percentage (.912).  Hellebuyck is 2-1-1, 2.40, .926 in four appearances against the Caps. 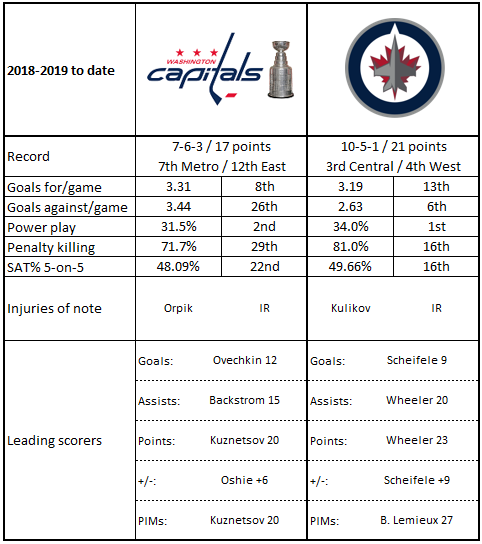 1.  Twice this season the Jets had five-plus-game stretches in which they alternated wins and losses.  In addition to the 2-3-0 record they posted in Games 10-14 before their two game winning streak going into this game, they opened the season alternating wins and losses over their first six games (3-2-1).

2.  Winnipeg has scored five or more goals on home ice four times this season.  Through Monday’s games, no team had done it more often (three others with four: Boston, Calgary, and Montreal).

3.  The Jets are not that productive a team at even and full strength.  Their 26 goals at 5-on-5 is more than just four other teams, and they are a minus-4 in goal differential, having allowed 30 goals at fives.

4.  While the Caps have been a very productive team in the middle periods of games this season (26 goals, tied for first), the Jets are not.  Their 11 second period goals is fewer than every team in the league except Calgary (10).

5.  With a 4-3-0 record when opponents score first, the Jets are tied for the third-best winning percentage when allowing the first goal (.571, with Montreal).

3.  Alex Ovechkin has scored more goals against the Atlanta/Winnipeg franchise than he has against any other blub (47 in 63 games).

4.  The same could be said for Nicklas Backstrom.  His 17 career goals against the Jets are tied for the most he has against any franchise (Philadelphia being the other).

5.  The Caps have ten players in “minus” plus-minus territory.  They had only eight over the entire previous season.  Lars Eller’s minus-9 is already at the level Brooks Orpik was for the whole season.

It is early yet, but this year has seen a drop in Laine’s shooting efficiency (12.5 percent) that has resulted in “only” eight goals in 16 games.  And, only one of those goals have come at even strength, the other seven on power plays (leads the league).  Laine started fairly well with three goals in his first seven games, but then he hit a dry patch with no goals over a five-game stretch.  He is heating up, though, posting three five goals (including a hat trick) in three games before having his three-game goal streak stopped against the New Jersey Devils on Sunday.  Laine is 1-0-1, minus-6, in four games against the Caps.

Not a player, but it is fitting to ponder the new coach’s situation.  Coming in right behind a Stanley Cup winning coach with the team that won the championship returning almost intact put Todd Reirden in a difficult position.  Plainly put, he was – is – supposed to win.  But he has had to deal with the consequences of a short summer, a lengthy suspension to an important player, injuries to the blue line, departures of two players who were very good in the roles they filled (Jay Beagle for defense, faceoffs, and penalty killing; Philipp Grubauer as backup goaltender), and new coaches assisting him.  It isn’t so much a systemic problem he faces through the first six weeks of the seasons as much as it has been weaknesses at critical joints in the structure.

Reirden has displayed a calm demeanor in what has been to the rest of Capitals Nation a frustrating lack of consistency of effort and success over the first six weeks.  If there is one thing that he seems to have a lack of urgency about, it is a penalty kill that cannot be described in pleasant terms.  The return of Tom Wilson and Brooks Orpik might help to shore up that weak penalty kill, but it is hard to think they will mean a nine point improvement from where they are now (71.7 percent) to where they finished last year (80.3 percent, hardly one of the elite PK units).  There are bigger problems to be addressed that might be Reirden’s biggest challenge behind the bench so far, and considering that Winnipeg has the league’s top home power play (40.7 percent), the challenge just gets tougher.