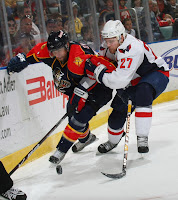 
Theme: “Nothing contributes so much to tranquilizing the mind as a steady purpose”
-- Mary Wollstonecraft

Things happen. A player scores a goal…red lights flash, horns sound, fans cheer. A penalty is taken…a player skates to the box, fans boo (either him or the call). A player executes a thunderous check…glass rattles, fans come out of their seats.

But what happens when a player, merely by being in the right place at the right time, prevents things from happening – things that are bad for your team? No one cheers a player playing “sound positional defense.” Fans don’t come out of their seats when a defenseman angles a puck-carrier away from the place he wants to go. Horns don’t sound when a defenseman ties up a player around the net so he can’t secure a rebound.

The World of Karl Alzner…quiet, steady, and yet purposeful.

In 143 regular season and playoff games in the NHL, Karl Alzner has a total of three goals. You can hold off counting the Norris Trophy votes. But in 2010-2011 173 defensemen played in at least 50 NHL regular season games. Only 20 faced better competition at 5-on-5 over the course of the season than did Alzner (according to behindthenet.ca). Only one of them – Florida’s Jason Garrison – came into the season having played in fewer NHL games than the 51 Alzner played before last season began. Of those 173 defensemen, only 14 had a better Corsi value relative to quality of competition, a reflection of Alzner’s ability to defend, since he does not contribute a lot at the offensive end of the ice in terms of shot generation. Only 20 players in that group recorded fewer goals against his team scored while he was on the ice at 5-on-5 than did Alzner.

And this is the player Alzner is. If you are expecting an offensive player to bloom as he matures, don’t count on it. He hasn’t recorded more than ten goals in a season since he played for the Burnaby Winter Club in 2002-2003 at the age of 14. Only twice since then has he recorded seasons with more than five goals. Alzner is a defenseman who plays defense, not by rattling the glass with opponents (his 98 hits last year was tied for 82nd in the league), but by using anticipation and position to use the word “defend” as the verb it is intended to be, not as a synonym for being “physical.”

Fearless’ Take: There is the Corsi, the Fenwick, the shots for and against and all that, but boil it down to this -- fewest goals against/on ice per 60 minutes at 5-on-5 last season among Caps defensemen. You can use the other statistics to explain “how” he got there, but “that” he got there is the object of the exercise. And that was a significant improvement over his 2009-2010 performance in that regard, when he was worst on the club in that statistic (although in only 21 games).

Cheerless’ Take: That performance did not carry over into the post season last spring. His goals against/on ice per 60 minutes at 5-on-5 jumped from 1.90 to 2.45 in the playoffs (second worst among Caps playing in at least two games). That might not have been a surprise. While he was a plus-14 in his first 68 games, he was only “even” in his last 14. Fading down the stretch?

The Big Question… Is Alzner going to be the shutdown defensemen over 82 games, and more?

It is worth noting that Alzner is still only 23 years old and still has only 143 games of regular season and playoff game experience in the NHL. And last season he faced the highest quality of competition among all Caps defensemen playing in at least 50 games. He did slip a bit late last season, and the question there is whether it was just a matter of the state of Alzner’s physical maturity. But even with that blip late last season there were 173 defensemen in the NHL who were on the ice for more goals against than Karl Alzner. He is already an accomplished practitioner in the art of “defense.”

Karl Alzner is not going to wow fans with big hits or end to end rushes or weak side pinches for top shelf goals. He plays angles, keeps within himself in terms of position, moves the puck out of trouble. If one doesn’t notice Alzner’s game on the ice on any given night, chances are the opponents he faced didn’t score a goal while he was on the ice. In fact, if you look at those 20 defensemen who had lower goals against/60 minutes at 5-on-5 last season, only Zdeno Chara and Kevin Bieksa faced a higher quality of competition.

Alzner and John Carlson have skated as a pair for some time now, either at Hershey or with the Caps, where both played in all 82 games last season, the only defensemen to do so for the Caps last season. That kind of reliability, and the “steady purpose” of Alzner’s game will be a critical element in the Caps’ march toward a Stanley Cup.

(Photo: Bruce Bennett/Getty Images North America)
Posted by The Peerless at 6:20 AM 1 comment: