The Peerless Prognosticator is ON THE AIR!!! -- Game 46: Capitals at Hurricanes, January 20th

Weren’t we just here last Sunday with a Caps-‘Canes game?

Oh, please, go on, Cheerless. You’re on a roll.

“There are more breweries per capita over in Ayshvull…”

Yeah, whut I said, ‘Aysh-vull’… there’s more breweries there per capita than any city in the Yoo-nited States. Hey, is that why they call it ‘per CAP-ita? Like a bottle cap?”

Whether you prefer your adult beverages in a glass or an aluminum container, stock up and get ready for an always entertaining Southeast Division matchup (and we can’t wait until that day when we don’t have to say that anymore…please guys, realign!) between the Washington Capitals and the Carolina Hurricanes. The Caps and ‘Canes have completed half of the season series with the Caps having won all three games to date.

When the teams met last Sunday in Washington, Carolina was having trouble in most statistical categories – 15th in scoring, 28th in defense, 27th in 5-on-5 play, 20th on the power play, 27th in penalty killing. It added up to a 4th place spot in the Southeast Division and a 13th place ranking in the Eastern Conference. The Caps squeezed out a 2-1 decision against Carolina that was probably closer than the relative statistical positions of the teams would have suggested. And maybe it is fortunate that Carolina has had to take the ice only once since dropping that 2-1 decision to the Caps last Sunday. They lost to Pittsburgh in a trick shot competition, 2-1, on Tuesday. What that loss means, when coupled with their relative inaction this week, is that they have sunk a bit further in the number rankings: 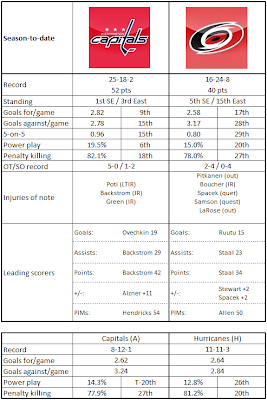 (click on pic for larger image)
And with just that one loss, even with the extra-time point, the Hurricanes find themselves at the bottom of the Eastern Conference as action is about to begin on Thursday night. They are in no danger of being overtaken by Columbus any time soon, but they have Anaheim and Edmonton breathing down their necks for 27th place in the league.

1. When last we wrote of the Hurricanes, we noted that thirteen times the Hurricanes trailed after one period; twelve times they lost in regulation time. That has not changed. But instead of there being two teams with a worse record (Anaheim and Phoenix), now there are three – add Buffalo to that group. Baby steps.

3. When Carolina took the ice against the Caps last weekend, Eric Staal was last among 813 skaters in plus-minus (minus-21). Well, he is still last (minus-22), but now it is of 816 skaters. He is the only skater worse than minus-20. He has been on the ice for more goals against (65) than any other league forward, and it’s not close for second (Shawn Horcoff: 53).

4. Carolina actually saw their goals allowed average in the third period drop since taking the ice on Sunday, from 1.41 to 1.38. The gap between that number and Tuukka Rask’s GAA in Boston (which was 1.59 last Sunday) is widening (Rask is now at 1.61).

5. Every Carolina defenseman having played in at least 20 games has been on the ice for more goals than games played, except for Jaroslav Spacek. Too bad that his record includes his time with Montreal, and besides, he’s been out with a head injury and is questionable for this game.

1. Only seven defensemen have more assists on the road than Dennis Wideman (11).

2. Think the Caps don’t miss Nickas Backstrom? Only one forward (Claude Giroux: 16) has more power play assists than Backstrom (15). Then again, since he left the lineup the Caps are 4-for-18 on the power play (22.2 percent, compared to 19.5 percent for the season). Still, all things considered, we’d rather have him back.

3. Half of Jason Chimera’s 14 goals have come against Southeast Division opponents. One of them came against the Hurricanes (opening night).

4. Alexander Semin is seventh among all NHL forwards in minor penalties taken, but he has only one taken in his last 11 games.

5. Only three teams have allowed more power play goals on the road than the 19 allowed by the Caps (Carolina, Columbus, and Toronto).

Only nine defensemen in the league have been on the ice for more goals against than John Carlson. One of them happens to be Chicago’s Duncan Keith, so there is that. Still, it is not a list on which one hopes to rank highly. He had a stretch of five games (December 30 – January 9) in which he had no points and was a minus-seven. Since then he is 0-1-1, plus-1. Hopefully, he is working himself out of the bit of a funk in which he has found himself in the defensive zone.

2. Familiarity Breeds…Complacency. The Caps are three-for-three against the Hurricanes this season, and Carolina is at the bottom of the Eastern Conference standings. With the Penguins waiting for the Caps on Sunday in Pittsburgh, there is the threat of the Caps taking this team and this game lightly. If there is a team that really cannot afford to take anyone lightly, it is the Caps.

3. Score first. In the last five games, the Caps scored first four times. They won four times. In the other one, they were shut out. This is not a hard game to figure out in terms of the benefits of scoring first.

In the end, there is a big neon flashing sign saying “DON’T LOOK AHEAD” concerning this game. The Caps have Pittsburgh on Sunday, then Boston on Tuesday. This is the kind of game made for the phrase, “take ‘em one at a time.” As for this one…

Capitals 3 – Hurricanes 1
Posted by The Peerless at 6:21 AM No comments: