The Peerless Prognosticator is ON THE AIR!!! -- Game 43: Capitals at Bruins, January 10th

The Washington Capitals start the back half of their schedule for the week on Thursday night when they head north to visit the Bruins in Boston.  The Caps will be looking to extend one of the most unusual expressions of dominance of another team in their history, while the Bruins will be looking to shake off that recent history with the Caps and extend their own current winning streak of five games.

Everyone’s favorite player to hate – Brad Marchand – leads the team in goals (nine) since December 1st and is tied for the team lead in points (23) in 17 games played since then.  Marchand, who has spent most of his career honing his skills and reputation as a pest, has graduated to the sort of goal scorer teams have to game plan for.  Coming into this season he was one of only four players who recorded 30 or more goals in each of the previous three seasons.  The others – Alex Ovechkin, Nikita Kucherov, and Vladimir Tarasenko – are hockey goal-scoring royalty.  He is currently on an overall pace to score 29 goals this season, but his nine goals in his most recent 17 games suggests that he has a good chance to pass the 30-goal mark for the fourth straight season.  And, it matters.  Marchand has goals in 13 games this season, and Boston has lost only once, back on October 17th in a 5-2 loss in Calgary to the Flames.  In 27 career games against the Caps, he is 7-9-16, minus-10.

David Pastrnak supplies the “two” in the one-two punch of Boston goal scoring.  His six goals since December 1st are second-most for the Bruins, but unlike Marchand, who has ramped up his goal-scoring pace, Pastrnak has cooled off.  He could hardly help but do otherwise.  Pastrnak started the season as if he was going to blow through recent goal-scoring records for the club and in the league – seven goals in his first five games, ten in his first nine contests, 19 in his first 25 games, including two hat tricks and five multi-goal games.  He has, however, cooled off considerably.  In those first 25 games he potted his 19 goals on 101 shots, an 18.8 percent efficiency mark and more than four shots on goal per game.  In 18 games since December 1st, he has nine goals on 61 shots (9.8 percent) and is averaging 3.39 shots on goal per game.  And, his streakiness mirrors that of the team recently.  Over his last 12 games he has, in order, a three-game streak without a goal, two with a goal, three more without one, two with a goal, and a two-game streak without one heading into Thursday’s game.  Pastrnak is 3-4-7, minus-9, in 10 career games against Washington.

In a population of NHL defensemen that include the likes of Erik Karlsson, Kris Letang, and Brent Burns, Torey Krug can be overlooked easily.  Recently, that would be a mistake.  Since December 1st, Karlsson and Burns are the only defensemen in the league with more points (18) than Krug (17), and Krug is tied with Burns and Morgan Rielly for third place on that list.  No defenseman since December 1st has more power play points than Krug (11) through Tuesday’s games.  Krug probably gets insufficient credit as an offensive contributor from the blue line.  He is one point from being one of only six defensemen over the five seasons preceding this one to record five 40-point seasons (he had 39 points in 78 games in 2014-2015) and is one of only four blueliners to record 50 or more points in each of the last two seasons (Karlsson, Burns, and Victor Hedman are the others).  He is on the best points-per-game pace of his career to date this season (0.84), but he lost 11 games to an ankle injury in October.  Nevertheless, that points per game pace would, if he maintains it, give him a third straight season over 50 points.  Krug is 0-3-3, minus-9, in 14 career games against Washington. 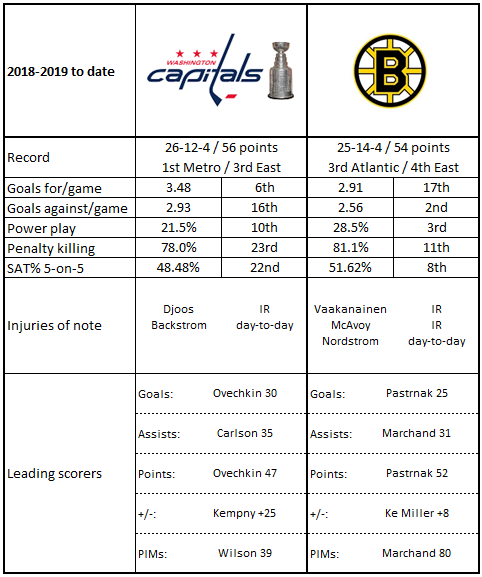 2.  The Bruins put a lot of pressure on clubs by virtue of the power play chances they get.  The 60 chances they have had since December 1st are most in the Eastern Conference and tied for third in the league, behind Colorado (76) and Calgary (66).

3.  Boston has had a distinct advantage at 5-on-5 when games have been competitive.  Since December 1st, the Bruins rank fourth in both shot attempts-for percentage at 5-on-5 in tied (54.12 percent) and close situations (52.41 percent).

5.  Jumping on the Bruins early is a tough task.  They have allowed only 27 first period goals this season, second-fewest in the league to Dallas (26).

3.  Only one Capital has more than one power play goal since December 1st: T.J. Oshie (two).

4.  Eight different players have game-winning goals since December 1st, but only Brett Connolly has two.

NHL hockey has been played in Boston since 1924.  In all that time, only six forwards have appeared in more games than has David Krejci.  Only seven have more points, and soon (with four more points) he will climb past Terry O’Reilly into sixth place on that list.  This is a franchise with 32 skaters in the Hockey Hall of Fame.  One does not come by a high ranking on franchise lists cheaply.  Nevertheless, Krejci is the sort of player who can get a bit lost in the noise – Brad Marchand’s “personality,” Patrice Bergeron’s elite two-way play, Zdeno Chara’s amazing endurance and longevity.  Even David Pastrnak's precocious goal-scoring seems to have overtaken him in terms of attention.

Krejci’s progress has been of the slow and steady (anonymous, perhaps) sort.  He has never scored more than 25 goals in a season (23 was his high in 2011-2012), but he does have nine seasons with at least ten goals.  He has never had a 75-point season, but he does have seven seasons with 50 or more points.  This has been a rather typical season for Krejci, with one exception.  He has appeared in all 43 games for the Bruins this season, which is a bit unusual.  Only once in 12 previous seasons did he appear in every regular season game (2016-2017).  Otherwise, he is on a pace to be a double-digit goal scorer and 50-point player once more (13-50-63 on an 82-game basis).  He has been in a goal scoring drought lately, though, going into this game without one in his last eight games.  Krejci is 7-13-20, minus-10, in 34 career games against the Caps.

Of all the players to take the ice for the Caps since December 1st, Michal Kempny has one of the strangest profiles.  His three goals in that span leads all Caps defensemen, and his seven points are second to John Carlson (14).  His plus-11 is best among defensemen, best on the club, and tied for 13th-best in the league overall in that span.  Good things happen when he is on the ice.  When he is on the ice.  Since December 1st, Kempny also has nine minor penalties, most on the team, and his 18 penalty minutes is tied with Tom Wilson for most on the club.  What Kempny has had is more responsibility as time goes by, at least as it is measured by ice time.  In his first 19 games this season he averaged 18:36 per game, but in his last 20 contests that average is 20:04, including the only two instances this season in which he skated more than 23 minutes – 23:04 in a 5-3 win in New York over the Rangers on November 24th and 23:58 in a 3-2 win in Ottawa over the Senators on December 29th.  Kempny has face the Bruins only once in his career without a point while going plus-1.