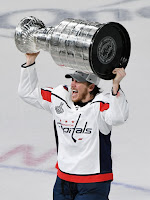 If the NHL had an “effort-per-pound” statistic in the NHL, T.J. Oshie might be among the league leaders.  He is absolutely fearless in playing above his size (5’11”/195) in going to the hard areas of the ice and trying to impose his physical will on opponents.  It is a hard way to make a living.  That he missed only 24 games in his three seasons as a Washington Capital says something about his toughness, but 22 of those games came in the last two seasons, eight of them in 2017-2018.

The physical wear and tear as a result of his style of play might have contributed to a fall-off in goal production from a career high 33 in 2016-2017.  His 18 goals in 74 games this season were Oshie’s fewest in three years as a Capital and the lowest goal total posted in a full season since he had 12 in 49 games of the 2010-2011 season with the St. Louis Blues.

And it matters.  Oshie scored goals in 14 games this season, and the Caps were 11-1-2 in those games.  Points were weaker as an indicator of success, although the Caps did go 22-9-4 in the 35 games in which he recorded a point.

But back to the grittership.  Oshie tied Alex Ovechkin for third among the club’s forwards in hits-per-game (1.7).  His 124 credited hits made it four times in ten seasons in which he was credited with at least 100 hits.  He tied Tom Wilson for third among that group in blocked shots-per-game (0.7).  His total of 54 blocked shots made five seasons in ten in which he had at least 50.  And though he is nominally a right winger, he took 211 draws for the Caps (fifth on the team) and won 47.9 of them.

There were numbers that might have raised some concerns about Oshie and whether he might be feeling some effects of his style of play.  He posted six goals in his first eight games this season.and ten in his first 21 games.  However, he followed up that start with just two goals in his next 42 games, perhaps affected by the apparent concussion he suffered against the San Jose Sharks on December 4th.

Then there was the Gimmick.  Oshie is one of the most effective practitioners of the dark arts of the trick shot phase of the game.  In his nine-year career before this season, no player among the 135 taking at least 25 shots in the freestyle phase had a better shooting percentage than Oshie (54.9 percent on 39-for-71 shooting).  It made his 1-for-4 performance this season a bit out of place. 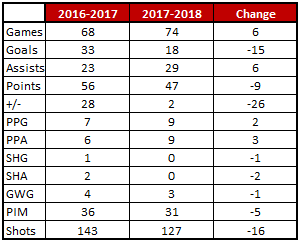 Fearless’ Take… T.J. Oshie is counted on to be a goal-scorer for this club.  His injury-influenced 18-goal total might have been a bit disappointing, coming off his 33-goal season a year previously, but Oshie contributes in many ways.  For instance, he belongs to a select, if odd club this season.  Only five players in the league were credited with at least 100 hits, took at least 100 faceoffs, recorded at least 50 takeaways, and had at least 50 blocked shots.  Oshie was one of them (Blake Coleman, Gabriel Landeskog, Vincent Trocheck, and Jamie Benn were the others).

Odd Oshie Fact… Oshie wears number 77 on his jersey.  He has 77 goals as a Capital, and he has 77 assists with the club in his three seasons.

Game to Remember… Usually, it would be a regular season game we would describe here, but this image with his father after the Stanley Cup clinching game -- well, it’s what kids play for…

Thirteen shifts, 10 minutes and change in ice time, one shot attempt (blocked), one hit, one takeaway.  And then there was this…


…he sat out the last 23:26 of the game and was out of the lineup for the six games that followed.  It was his lowest ice time of the season, one of 15 games without a shot on goal, one of only five games in which he did not take a faceoff.  The Caps won the game, 4-1, but Oshie might not remember much of it.  Nor might he want to.  Not for anything negative in his performance; it was just one of those nights when things go bad just before they get worse.

Postseason… The rap on Oshie when he was with the St. Louis Blues was that his postseason production was lacking.  In 30 playoff games over five seasons, he went just 5-4-9, minus-12.  This has not been a problem with the Caps.  In 49 postseason games with Washington, he is 18-25-43, plus-9.  And, he has improved his numbers in each of his three postseasons with the Caps, culminating in a 8-13-21, plus-5, scoring line this spring.  His six power play goals not only led the league in the postseason (tied with Alex Ovechkin and Steven Stamkos), it eclipsed his total of five power play goals in 55 playoff games before this season.

Oshie had two game-winning goals, each of which came in pivotal games in their respective series.  He had the game-winner in a 4-1 Game 4 win in Columbus against the Blue Jackets to send that series back to Washington tied and with the Caps regaining a home-ice advantage after dropping Games 1 and 2 at home.  He also had a game-winner in the 3-0 win in Washington in Game 6 against the Lightning to force a seventh game in Tampa. Both game-winners came on power plays.

Oshie was especially lethal on home ice in the postseason, recording six of his eight goals at Capital One Arena and recording points in eight of the 11 games played on that ice sheet.  But the one very odd statistic that jumps off the page is that the Caps were 7-1 in games in which Oshie recorded one or no shots on goal.

T.J. Oshie has had rather consistent numbers in St. Louis and Washington in the regular season – 310 points in 444 games with the Blues and 154 points in 222 games with the Caps.  But when Oshie signed an eight-year/$46 million deal with the Caps that started in the 2017-2018 season it was with bigger contributions in mind, and we don’t mean three-point games in January.

That Oshie plays the game with such brio at his rather average size for an NHLer makes the game a struggle at times.  He has never appeared in more than 80 games in a season (he appeared in 80 games twice in ten seasons) and more at least 75 games only four times.  But those setbacks have not kept him from contributing when he is on the ice, and he finally found his postseason spark this year.  With the struggle did come progress.