Nope, it’s not our line, and it wasn’t uttered in reference to hockey by its author, but we thank comic Ron White for a line that certainly applies to one of hockey’s…”challenged” columnists.

We give you two quotes from Toronto Star columnist Damien Cox, the first from April 2006 in commentary about the Calder Trophy race…

"For their age – [Alex] Ovechkin is 20, [] doesn't turn 19 until August -- they are remarkably mature, in their professional demeanors and their on-ice play. Ovechkin was a force for his country at the 2006 Winter Olympics, scoring the winning goal in a highly emotional victory over , and has been one of the few consistent factors for the Pens as a season of high hopes turned into another year lounging in the bottom levels of the NHL.

Indeed, although some -- including this writer -- would argue that Phaneuf or Lundqvist has been as good as, if not better than, the two young snipers, both of those players have found their freshman seasons eased somewhat by being part of winning teams."

Interesting…Ovechkin and Crosby – the emerging centerpieces of their era of hockey, top scorers, the players (regardless of veteran status) that every team had to game plan for when facing them in their respective rookie years – are no better than 3rd and 4th on one scribe’s ballot for rookie of the year (although he does damn with faint praise, calling criticism of their play "nitpicking"). And in what sense were either merely, "snipers?"

Fast forward to yesterday in a column titled, "Talented Losers Don't Make the Cut on This Ballot"…

“…it's [Nicklas] Lidstrom-[Martin] Brodeur, 1-2, or perhaps 1 and 1A on this ballot, with 's Evgeni Malkin third for the way in which he has lifted that club during Sidney Crosby's injury absences.

But what about the brilliant Alex Ovechkin?

Well, he's still got two weeks to get the young, talented Capitals into the playoffs, and if he can do that, this ballot will need revision.

It is worth noting that the only player contending for a major award that Cox refers to by name as ineligible on his ballot for a major award is Alex Ovechkin. He chooses Jonathan Toews for the Calder, and the last time we looked, Chicago's record wasn't as good as Washington's. There are but two colors on Cox's palette -- "excellence" and "losers." In case you need help, he's identified Ovechkin (and only Ovechkin) as having the latter shade.

What he has to say in justifying Martin Brodeur over Evgeni Nabokov for the Vezina or Evgeni Malkin over Ovechkin for the Hart is equally silly (having nothing to do with what the award citation actually says...we're not aware that who a general manager might wish for as a goaltender, for example, is of any relevance to the actual selection criterion for the Vezina)

However, at least Cox is consistent. The charms of consistency are often overrated, though, as this poster so poignantly illustrates… 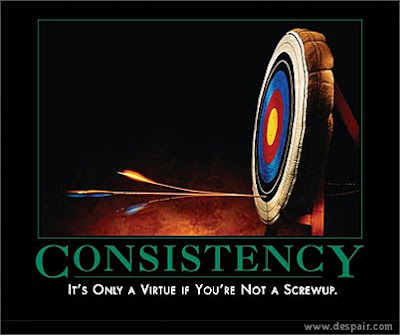