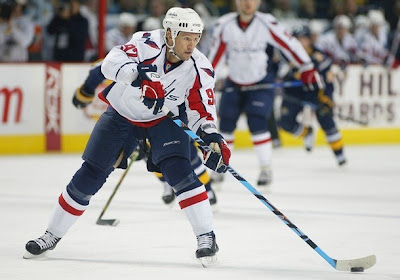 Michael Nylander played in 72 games this year. That is not a misprint, but it had to be the most anonymous 72 games perhaps ever logged by an NHL player, certainly among those who make almost $5 million a year. When the season started, we thought Nylander would bounce back – somewhat – from last year’s season lost to injury…

Here is a player who, coming into this season, averaged 19-43-62 per 82 games over an NHL career that spanned 848 games. 72 games later, he was an afterthought on a team with hopes of competing for a Stanley Cup…

After scoring six points in his first four games of the season (2-4-6, +2), he went 25 games without a goal with only nine assists. He went 36 games with a total of only two power play points (both assists in a game against Anaheim on November 19th). By appearances, the Caps had changed their basic philosophy in Nylander’s absence the previous year, relying on a north-south, high-tempo style of attack that was at odds with Nylander’s more deliberate, east-west, curl-off and find the trailer sort of approach to offense. In a real and in a figurative sense, Nylander never caught up.

Looking at the ten-game segments one can see a slow descent into irrelevance. His scoring started in a manner consistent with his career trend (eight points in his first ten) games, but he’d never reach that mark again, getting more than four points in any ten-game segment only once. He had a total of seven multi-point games for the season (by way of comparison, Brooks Laich had 11; Eric Fehr had five), four of them before Thanksgiving.

In other areas, he was worst on the club in faceoffs among players taking at least 200 draws (perhaps a lingering effect of his shoulder injury). He took as many shots per game (1.2) as defenseman Milan Jurcina. He was ninth on the team in power play scoring (4-6-10), but had only five power play points in the 2009 portion of the season. This is a guy who was 18th in the entire league in power play scoring (14-23-37) in the year before he rejoined the Caps. Among the Caps’ centers, only David Steckel and Boyd Gordon averaged fewer points per 60 minutes at even strength, and Steckel and Gordon are defense-first players. That might not be true of Nylander, who was on ice more frequently for goals scored against at even strength per 60 minutes than any other center on the club.

Statistically, stylistically, whatever – this season was largely a disaster for Nylander. Whether this is a lingering product of his injury in the 2007-2008 season or his playing a style incompatible with that currently employed by the Capitals, there are some important decisions with respect to Nylander’s future on the club – decisions that are difficult to separate from Sergei Fedorov, who had his own production problems (perhaps a combination of age and health issues).

Nylander has two more seasons at $4.875 million a year to go on his contract. A 13 minute a night, 35-point center earning that sort of money is a substantial drag on the Caps’ payroll and their flexibility to make roster moves. His offensive production (9-24-33 in 72 games) was approximately equivalent to Columbus’ Manny Malhotra (11-24-35 in 77 games), a player who earns less than one-fourth what Nylander does ($1.2 million).

We said that Nylander’s season was a slow descent into irrelevance. Here is one way to look at that. He only dressed for 35 of 44 games in the 2009 portion of the season and skated for more than 15 minutes in only five of them. In his last year with the Rangers before signing with the Caps he had only five games all year out of 79 in which he played in which he skated less than 15 minutes.

It would be easy to forget that Nylander was 5-14-19 in 21 games with the Caps before Bruce Boudreau took over early in the 2007-2008 season. If anything, this lends weight to the argument that Nylander has not so much forgotten how to play hockey as much as he is a bad fit for this particular team. On teams that play the equivalent of a half-court offense – such as that which the Rangers played when he and Jaromir Jagr skated for the Rangers—Nylander has been, and would appear still to be, an effective player. On this team? It would not seem likely.

Nylander’s problems are not necessarily of his making as much as they might be the status of his physical recovery and the style the club plays. Still, he did not perform well within this structure, and for that…

Email ThisBlogThis!Share to TwitterShare to FacebookShare to Pinterest
Labels: Nylander, the tens 2008-2009 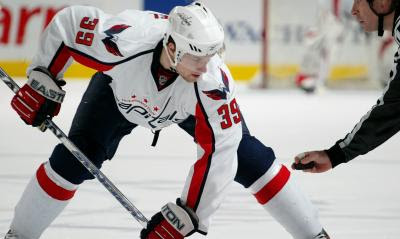 Here we have our preseason projection and the actual season numbers for David Steckel...

If you look at his scoring by month, he averaged three points a month (not including April), not scoring fewer than two or more than four in any month. He went 6-8-14 in 59 games against team in the East and 2-3-5 in 17 games against the West (approximately the same scoring rate over comparable numbers of games). He was 4-6-10 in 39 games at home, 4-5-9 in 37 games on the road. Only three times in 76 games was he on the minus side of the ledger in consecutive games, and never more than two games in a row. And, only five times in a total of 76 games did he go consecutive games losing more faceoffs than he won (three games was his longest streak), only once after December.

Steckel could become the sort of third line center the Caps need. He shows promise of becoming an anchor in the middle among the lower half of the forward lines – consistent, able to win faceoffs consistently, defense-minded (fewest goals scored against per 60 minutes among centers), effective in penalty killing, and he has an ability to chip in some scoring (he scored goals more frequently per 60 minutes of ice time at even strength than Nicklas Backstrom).

But he’s not there yet, not when you consider that this is a team that finished 19th in goals allowed per game and tied for 17th in penalty killing, even though Steckel was by far the least likely (among Caps center playing at least 60 games) to be scored on at even strength and was most likely to be the center on the bench when opponents scored in those situations.

At the age of 27, Steckel is blooming perhaps a bit later than one might have expected for a former first-round draft pick (30th overall in 2001), but by the same token, what is past might be prelude. For example, under coach Bruce Boudreau at Hershey in the AHL, Steckel showed an ability to score shorthanded goals. He had five such goals in his last regular season campaign with the Bears and another three in the Calder Cup playoffs in that 2006-2007 season. This year, he scored his first two shorthanded goals in the NHL. He had 30 goals in his last year with the Bears, following up on a 14-goal season he had in 2005-2006. This past year, his goal output increased from five to eight, and he had another three in 14 playoff games, including a game-winner against Pittsburgh.

Steckel has fewer than two full years of NHL game experience (155 games). This was only his second full season with the Caps, and in just about every statistical category you’d care to name, he improved on his first full season. He did show an ability to score at the AHL level, and one might hope that he continues improvement along those lines next year (he is signed through next year at a $725,000 salary). He’s been consistent, but perhaps needs to raise the production level at which he is consistent for the Caps to make the next step. For this year, though, he took a step forward one would expect for an inexperienced, if late-blooming, forward…