Imagine clicking on the ESPN (Extra Special Penguin Network) site, and finding this on the NHL page.... 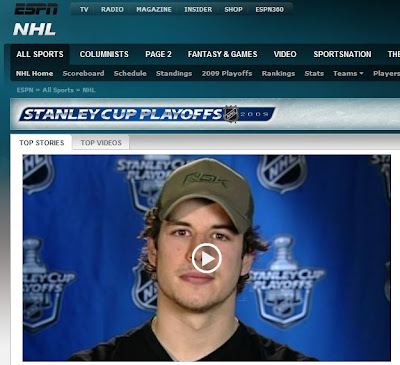 Your Peerless Prognostos for Round Two -- Vancouver (2) vs. Chicago (3)

It’s round two in this marathon of four sprints, and it all starts tonight with the Vancouver Canucks hosting the Chicago Blackhawks. So, we start there…

Roberto Luongo. How’s that for insight? He leads all playoff goaltenders in goals against average (1.15), save percentage (.962), and has a shutout. It’s not a case of just having found a patsy of an opponent (if such a thing could ever be said…ok, so there was that Montreal thing for Boston) in St. Louis in the first round. In his last seven games dating back to the last three of the regular season, Luongo is 7-0-0, 0.82, .973, and three shutouts. He’s in a zone.

Since losing to the New York Rangers in the 1994 Stanley Cup finals, the Canucks haven’t escaped the second round in three tries (in seven total playoff appearances). In fact, in 21 playoff appearances in franchise history, Vancouver has advanced from the second round only twice, both times reaching (and losing in) the finals. That’s a lot of history packed in their baggage. As a practical matter, one has to wonder if the Canucks will score enough to advance, despite Luongo’s passable impression of an earthen dam the last couple of weeks. The Sedins – Daniel and Henrik – produced at roughly their regular season pace (a point a game) in the sweep of the Blues in the first round, but the Canucks got little out of Pavol Demitra (a pair of assists) and less out of Mats Sundin (a goal in two games before missing the last two games of the sweep with a “lower body injury”).

The Peerless’ Player to Ponder:

Last Friday, he was said to be “flying around the ice” in a Canucks practice. Whether his problem has been a hip, groin, or knee, though, he’s got to add some offense, even if Luongo plays well. It’s what he’s here for.

Balance. In their six game win over Calgary, six players had at least six points, including two defensemen (Cam Barker and Brent Seabrook). The power play has been lethal (29.2 percent – second in the playoffs thus far), which is quite a reversal of fortune from how the Blackhawks finished the regular season in that regard (five of 60 – 8.3 percent – in their last 14 games).

They’re not supposed to be here. Well, they’re not supposed to advance, anyway… they’re too young, they’re not ready, blah-blah-blah. And Nikolai Khaibulin, who finished the regular season strong (8-1-1, 1.85, .921, and a shutout in his last ten regular season games), was much more ordinary in the series against Calgary (2.52, .914). If he’s not the guy, there’s always Cristobal Huet, but then again, he’s lost both of the playoff series he’s been in, too.

Some players have a natural swagger about them, and Kane has that in spades. But we’re at that point in the show where it’s got to be done on the ice, too. He was streaky to finish the regular season – a six-game pointless streak followed by a seven-game closing rush in which he was 1-5-6, +6. Against the Flames, he was 2-2-4 in five games, including a 1-1-2 effort in the series clincher. He was 2-2-4 in four games against the Canucks this season. Chicago will need that sort of an effort to topple Vancouver.

Frankly, there seem to be more reasons to pick against either of these teams than there are reasons to pick for either of them…Vancouver doesn’t have enough scoring. Chicago is too young. The Canucks have shown an unsettling tendency to take penalties – 24 shorthanded situations in four games (worst on a per-game basis of any surviving team). Chicago hasn’t been especially dominating at even strength (the worst of the eight teams remaining). Vancouver has a poor track record in the playoffs after round one. Chicago has been this far once in the last 13 seasons, and the last time was, well, 13 seasons ago.

At this time of year, it’s really hard to pick against the hot goalie, and that argues for Vancouver. Khabibulin was ordinary in the first round, but he’s the only goalie in this series with a Stanley Cup on his resume. Chicago has more and deeper skating talent, even if Sundin raises his game for Vancouver. Someone has to win this series…it’ll be the one with the home ice advantage.

Vancouver in 7
Posted by The Peerless at 7:06 AM No comments: