The Peerless Prognosticator is ON THE AIR!!! -- Game 55: Capitals at Sharks, February 11th

This week it is “Westward, ho!” for the Washington Capitals as they head to the Golden State for three games.  First up is a visit to San Jose, where the Caps hope to build on the one-in-a-row winning streak against the Sharks at the SAP Center at San Jose.

The idea of “one-in-a-row” is hardly insignificant for the Caps, who before beating the Sharks in a 3-2 trick shot decision last March had gone winless in 12 straight games dating back to December 1995 (11 losses and one tie).  The arena had as many names (three: San Jose Arena, Compaq Center, HP Pavilion) as the Caps did in San Jose, all-time, before the win last March.  As it is, the Caps have not won a game in the hockey portion of the contest (regulation or overtime) in San Jose since October 30, 1993, when Keith Jones, Mike Ridley, Peter Bondra, and Craig Berube scored goals, and Rick Tabaracci stopped 25 of 27 shots in a 4-2 win, the last of five straight wins overall for the Caps to open their franchise series against San Jose. Since then, the Caps are 5-20-2 against the Sharks, with one tie.  The Caps have been little more than surfboarders on the Great Barrier Reef as great white sharks feast on them.

February 2015 has not been kind to the Sharks, however.  After wrapping up January with a three-game winning streak to push them to a season-high ten games over .500, the Sharks are 1-3-1 in February, exhibiting a leaky defense (17 goals allowed) in the process.  That leaky defense ends with Antti Niemi in goal, who is 1-2-1, 2.96, .907, over those five games.  Those are not particularly bad numbers, but neither are they good.  He has allowed four or more goals in three of those four contests, all losses.

Niemi has been one of those goaltenders who is perfectly capable of doing his job well, if not at an elite level.  For example, since the 2009-2010 season, when Niemi played in 39 games in his first full season with the NHL (with Chicago), 35 goaltenders have appeared in at least 150 games (Niemi has appeared in 317).  In that group, Niemi ranks tenth in goals-against average (2.37), but he ranks smack in the middle – 17th – in save percentage (.916).  That he should rank third in wins (180, behind only Henrik Lundqvist with 192 and Marc-Andre Fleury with 202) speaks to a certain amount of good fortune in having played for teams that surrounded him with talent, as was the case in that 2009-2010 season when he and the Blackhawks won a Stanley Cup.  Not that this has hurt his history against the Caps.  Niemi has not lost to the Caps in regulation time in seven career appearances (5-0-2, 2.19, .922, 1 shutout).

At the other end, Joe Pavelski leads the Sharks in scoring for February, both in goals and total points (3-2-5).  A guy who suffers something of a “west coast curse” when it comes to getting credit, Pavelski has become a very reliable goal scorer.  He has 116 goals over his last four seasons spanning 267 games, a 36-goal pace per 82 games.  And, he is durable, not having missed a game in those four seasons.  His 15 power play goals is tied for the league lead (with Alex Ovechkin), and his 22 power play points is tied for fifth in the league.  He is 6-4-10, plus-4, in ten career games against the Caps.

Brent Burns is the only defenseman to have played in all 55 games for the Sharks this season.  He leads the blue line in scoring in February (1-3-4) and is tied for third overall in league scoring by defensemen (12-28-40).  He has been alternating games with and without points over his last eight contests, so if the pattern holds it will be good news for Caps fans.  He is 2-4-6, even, in nine career games against Washington. 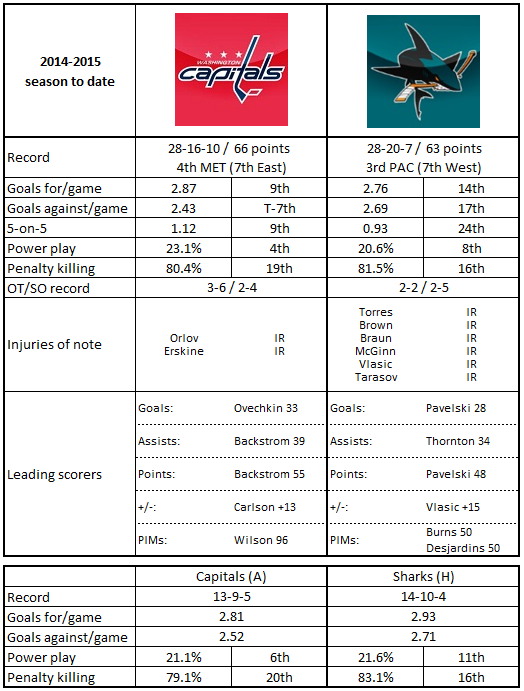 1.  San Jose has won 486 games over the last ten-plus seasons.  Their per-82 game season record over that span is 48-24-10.  Only the Detroit Red Wings have won more games (494).  And here is the odd thing.  For all the ink spent on documenting the Sharks’ woes in the post season, only Boston (60) and Detroit (70) have won more playoff games over that span of time (58, tied with Pittsburgh).

2.  Games involving the Sharks tend to be a bit one-sided.  San Jose has only 24 one-goal decisions in 55 games (tied for ninth-fewest in the league).  Their record in such games is not especially successful (11-6-7, 20th in winning percentage).  They are somewhat better in games decided by more than one goal (17-14).

3.  Don’t bet on shutout for either team. San Jose is tied for the sixth fewest number of times shut out this season (twice), the same as the Caps, and have not been blanked since dropping a 2-0 decision to Calgary on November 26th.

4.  San Jose is not the most effective team at 5-on-5.  Their 0.93 ratio of goals scored to goals allowed is 24th in the league, and that would appear to be a product of what is happening at the defensive end of the ice.  Only six teams have allowed more than the 106 5-on-5 goals allowed by the Sharks.

5.  The Sharks make up for a certain 5-on-5 defensive deficiency by avoiding shorthanded situations, especially at home. Only four teams have been shorthanded fewer times than the Sharks this season (71 in 28 home games).

1.  The 71 shorthanded opportunities faced by the Sharks at home this season has a nice symmetry with the Caps’ power play opportunities on the road – 71 in 27 games, fourth-fewest in the league.

4.  Your weird shootout fact.  The Caps have taken the fourth highest number of shots in the shootout on the road so far this season (20).  They all came in one game, that against the Florida Panthers in a 2-1 loss on December 16th.

5.  Washington is one of three teams to have two defensemen with more than 30 points (Joh Carlson: 36; Mike Green: 32).  Calgary (Mark Giordano and T.J. Brodie) and Nashville (Roman Josi and Shea Weber) are the others.

Back on December 9th, Joel Ward recorded an assist against the Tampa Bay Lightning in a 5-3 win.  It marked consecutive games with points for Ward and a 9-7-16, plus-2 start to his season over 27 games.  Since then, Ward is 2-3-5, minus-1 over his last 27 games.  Getting Ward to contribute some more in the offensive end would go a long way toward clinching a playoff sport for the Caps and perhaps finishing at or near the top of the Metropolitan Division.  He does have four of his 11 goals against Pacific Division opponents, though, three of them on the power play (three of those four goals came over two games against Calgary, so Cheerless advised me not to make too much of that, even as good as Calgary has been this year).  It isn’t really for lack of shooting that the goals have not been coming.  He had nine goals on 48 shots (18.8 percent) in his first 26 games, and he has two goals on 54 shots (3.7 percent) in his last 27 games.  One would like to think that the pendulum swings both ways, but one would also like to see that pendulum swinging to the other side pretty soon for Ward.  He is 5-2-7, minus-3, in 16 career games against San Jose.

California has not been kind to the Caps over the last 20 years,  but the games are on the schedule, so you have to play them.  And it’s not like any of the California teams have an aura of invincibility about them.  The Caps have already beaten both the Los Angeles Kings and the Anaheim Ducks this season (in the last eight days, although both games were at home), and the Sharks have been beatable of late, losing their last three games on home ice (to Edmonton, Carolina, and Calgary…go figure).  Washington broke the jinx in SAP Center at San Jose last year; now it’s time to take care of the streak in regulation time.

Washington will need more offense than they have been able to generate lately (12 goals in their last six games), which means more contributions from players like Joel Ward, Brooks Laich (no goals in his last 15 games), Jason Chimera (two goals in his last 21 games), and even a Matt Niskanen (no even strength goals this season).  As the Caps approach the last third of the season, getting everyone rowing in the same direction is going to be important.  Wednesday night would be a good time to start.

Posted by The Peerless at 3:37 AM No comments: