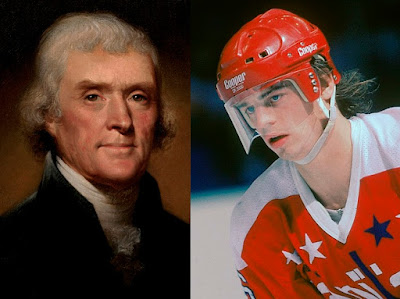 We continue our stroll through the history of American Presidents and compare the third President of the United States – Thomas Jefferson – with a Washington Capital of the past.  And that Capital is… Bengt Gustafsson.

Any child in grade school knows the basic history of Thomas Jefferson’s life and career.  Governor of Virginia, member of the Continental Congress, principal author of the Declaration of Independence, the first Secretary of State in American history, and Vice President under John Adams, in addition to serving as the Nation’s third president.

In Washington Capitals history, Bengt Gustafsson holds a lofty place of his own.  He ranks 14th in team history in games played (629), sixth in goals scored (196), seventh in assists (359), and seventh in total points (555).  Despite appearing in only 32 postseason games in Caps history, he ranks 15th in goals-per-game, fourth in assists-per-game, and sixth in points-per-game.

Those are the basics.  But what sets each of these individuals apart, and in a sense what binds them for purposes of this whimsical scribble, is what lies beneath.  With regard to Jefferson, John F. Kennedy once remarked at a dinner honoring Nobel Prize winners that the gathering was “the most extraordinary collection of talent, of human knowledge, that has ever been gathered together at the White House, with the possible exception of when Thomas Jefferson dined alone.”

It was not hyperbole.  Jefferson was a prolific inventor and innovator.  Some were mundane, like the “turning machine” for clothes.  Others served a utilitarian purpose, such as his take on the “moldboard plow.”  He also explored the process of copying with his “polygraph,” a redesign of the “dumbwaiter,” and even delved into encryption with his “wheel cipher.”   Certainly, Jefferson was much more than the offices he held.

It could be said that Bengt Gustafsson was more than goals, assists, and points, too.  He was a particular effective player on both sides of special teams.  More than 40 percent of his career assists (145 of 359) and more than a third of his total career points (194 of 555) came on the power play.  Four times in his last five seasons in the NHL he received votes for the Selke award as the league's top defensive forward, finishing as high as fourth in the voting for the 1985-1986 season.  And, as if to illustrate he could play the entire spectrum of “gentlemanly play,” Gustafsson demonstrated a certain fearlessness (if utter lack of good judgment) in playing physically, from his rookie year, when he had the temerity to dump Gordie Howe to the ice, to his last year in the NHL, when he finished sixth among 27 players receiving votes for the Lady Byng Trophy.

When Thomas Jefferson died, he was buried at his home at Monticello under a marker engraved with an epitaph he wrote: “Here was buried Thomas Jefferson, author of the Declaration of American Independence, of the Statute of Virginia for Religious Freedom, and father of the University of Virginia.”  He did not include his offices held among those accomplishments and for which he might be best known to students of American history.

For Caps fans, Bengt Gustafsson is best remembered for the nine seasons in which he played in Washington.  But more than that, he was a fixture on the Swedish national hockey team, playing in five world championships, medaling four times (two Gold).  He played in Canada Cup tournaments in 1984 (runner-up) and 1987 (eliminated in the semi-finals).  Gustafsson also appeared once in the Olympics for Sweden, that in 1992 (Sweden finished fifth).  He would go on to become an assistant coach with the Swiss national team, then move up the coaching ladder in Europe including stops as head coach with Färjestads BK in Sweden, where he won a championship in 2002, and with the Swedish national team.  In 2006 he cemented his spot in coaching history as the first coach to win both a world championship (over Czech Republic) and an Olympic gold medal (over Finland) in the same year.

Thomas Jefferson might have been, as John Kennedy suggested, the greatest collection of talent and human knowledge ever to find himself in the White House.  It might be said that Bengt Gustafsson was among the most talented and versatile players ever to have worn a Washington Capitals jersey.  It is in the richness and depth of their respective endowments, abilities, and varied experiences that is the reason they find themselves mentioned in the same space here.