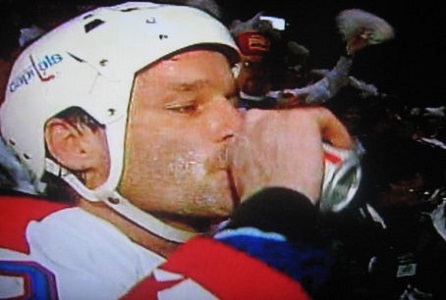 On the morning of Game 7 of the opening round playoff series between the Washington Capitals and the Philadelphia Flyers, the late Robert Fachet of the Washington Post quoted a number of Capitals on their thoughts of the upcoming matchup, one thought next to impossible days earlier when the Caps fell behind the Flyers, three games to one, in the series…

Dave Christian:  "The last two games, we were faced with being out of the playoffs and we survived. Now, we have to survive and play another one. We're all aware this still could be our last game of the season and we know what people will be saying if it is."

Rod Langway: "Right now, we're just worried about winning one game.  We're 20 players playing for each other and we deserve a lot of credit for coming back, especially in The Spectrum."

Mike Ridley: "It's tough to come back from 3-1.  But now we've got a lot of momentum coming home. It's a tough thing to stop…"

Head Coach Bryan Murray: "I think it'll be a real close, good hockey game.  We're fairly comparable teams. And in our case, I don't think it'll have anything to do with the past. We were backed against the wall two games in a row and I couldn't ask the guys for anything more. It's the same tomorrow; a loss and we're out."

Murray had more to say about some of his players.  About Bengt Gustafsson he said, "Gus plays better in important situations, as much as you need him and whatever you ask. I saw it in Vienna {where Sweden won the 1987 world championships}, where he was a dominant player."

He also had this to say about Michal Pivonka: “"Michal has really played well.  I saw spurts during the year where he did some good things, but on a regular basis he hadn't shown the ability to score every night. Those flashes of good play were becoming more frequent the last month or so and now he's a real factor.”

And about defenseman Kevin Hatcher, Murray said: "Kevin thrives on the physical play.  Against a real quick team, he can be burned a little by outside speed. But he's very strong in the corners and in front of the net. He's been a tower of strength for us, especially with Scott {Stevens} and Rod in and out of the lineup."

Christian, Langway, Ridley, Gustafsson, Pivonka, Hatcher.  Any of them could be the key player in this game.  Christian had a goal and five assists heading into Game 7 and was a team-leading plus-7.  Langway did not have a point in the five games in which he played, but the captain’s presence would provide stability on the back line.  Ridley, who was the third-leading goal scorer on the team in the regular season, had a pair of goals and a pair of assists in six games.  Gustafsson and Pivonka were tied for the team-lead in scoring for the series with ten points apiece, both on four goals and six assists.  Hatcher was tied for the team lead in goal scoring for the series with four going into Game 7.

Game 7 started with a bounty of opportunities for the Caps in the form of power plays.  Kjell Samuelsson was sent off just 2:31 into the game on a high-sticking call.  Doug Crossman went off at 9:24 on a holding penalty.  Ron Hextall was whistled for delay of game 10:31 into the game.  Ron Sutter was sent to the box at 12:47 for a high-sticking call.

Four power plays, including a 53 second 5-on-3 advantage, in less than 15 minutes, and all the Caps had to show for it was four shots on goal.  The Caps would pay for their lack of production later in the period.  The Flyers got one power play back when Greg Adams went off at 15:28 on a holding penalty.  The Caps were about to kill off that shorthanded situation, but then Grant Ledyard was called for spearing Rick Tocchet with less than three minutes left in the first period.  Ledyard was sent to the box for five minutes, and it put the Flyers on a brief, 14 second 5-on-3 advantage.  The Flyers could not convert the two-man advantage, but just after Adams emerged from the penalty box, Tim Kerr got the Flyers on the board to give the Flyers a 1-0 lead at the first intermission.

Philadelphia put the Caps in choke hold before the second period was three minutes old.  Brian Propp scored his fourth goal of the series 1:35 into the period, and Mark Howe put the Flyers ahead, 3-0, with a goal at the 2:59 mark.  At that point, the Caps were just trying to stop the bleeding.  But perhaps, deep in the recesses of their collective mind, they recalled Game 4 of this series.  Playing without either Scott Stevens or Rod Langway, both out with injuries, the Caps spotted the Flyers a 1-0 lead but scored four unanswered goals to take a 4-1 lead into the last ten minutes of regulation time.  They blew that lead, allowing the tying goal in the last minute of regulation, then lost in overtime to fall into that three games to one deficit out of which they were trying to climb in Game 7.  Climbing out of a deep hole was not impossible.

The Caps got a spark when Garry Galley took a Dale Hunter pass and beat Hextall through the pads in the seventh minute of the period.  Less than two minutes later, the Caps were within one, courtesy of Kelly Miller’s third goal of the series.  The Caps tilted the ice toward the Flyer end as play went on, and their effort was rewarded when Hatcher scored to tie the game with 2:06 left in the period.

Washington had their chance to take the lead early in the third period when Kjell Samuelsson was sent off for his second penalty of the game, giving the Caps their eighth power play of the contest.  The Caps fired blanks on their first seven man advantages, but the eighth time was the charm.  Dale Hunter scored just six seconds into the power play to give the Caps their first lead of the night, 4-3, 5:19 into the period.

Fans barely had time to celebrate the comeback when the Flyers staged one of their own barely a minute later.  Brad Marsh scored his first of the series and just his fifth playoff goal in 88 career postseason games to tie the game, 4-4, with still more than 13 minutes left in regulation.

Neither team could break the tie, however, and for the second time in the series the teams would go to overtime.  For the Capitals it was all too familiar ground.  They were one year removed from playing in a four-overtime Game 7 against the New York Islanders that ended early on Easter morning with an Islander win.  Caps fans might have been forgiven for thinking a similar result awaited them when Mike Gartner rang a shot off the crossbar early in the overtime.

The Caps maintained the pressure, though, and just before the six-minute mark of the period, Larry Murphy started what might be the most famous single play and goal call in Capitals history…

For Dale Hunter, it was not his first turn in the spotlight of an overtime, and not against the Flyers, either.  In 1981, Hunter ended Game 4 of the Quebec Nordiques first round series against the Flyers with an overtime goal (the Nordiques lost in the best of five series, 3-2), the first postseason game-winning goal of his career.  In 1982 he scored the series-clinching goal in overtime of Game 5 of their five-game series against the Montreal Canadiens.  In 1985 his overtime goal against Montreal gave Quebec a 7-6 win in Game 3 of their second-round matchup (Quebec won the series in overtime of Game 7).  And now, in his first season with the Capitals after coming over in a trade with Quebec, he became the first player in NHL history to score two overtime, series-clinching goals.

After the incredible disappointment of the way Game 7 ended in the first round in 1987, Game 7 of the first round in 1988 brought incredible joy, made sweeter coming at the expense of one of the Caps' most bitter rivals.  What makes it among the most memorable of goals in Caps history is the whole package – the rivals, the falling behind in Game 7, the comeback, taking and losing a lead, almost winning it in overtime, and then the call of then Caps play-by-play announcer Mike Fornes that anyone who was a Capitals fan of that era knows by heart: “…Murphy starts the rush… he hits Hunter…he’s in alone…a shot…AND A GOAL!!!!!"

A shot and a goal…a Caps fan’s favorite drink order.


You can see more about this game and this series here and here.
Posted by The Peerless at 8:00 PM No comments: