The Peerless Prognosticator is ON THE AIR!!! -- Game 42: Capitals at Hurricanes, January 3rd

The suddenly lackluster Washington Capitals take to the road on Friday, returning to Raleigh, NC, to face the Carolina Hurricanes as they kick off the second half of their regular season schedule.  The Caps will be looking to end their longest streak of losses in regulation this season – two – and stop a slide in which they have lost three of their last four games and just 5-5-0 in their last ten games.  Carolina comes into this game in the midst of an odd series of streaks – odd numbers, that is.  A three-game winning streak followed by a three-game losing streak, and now trying to extend their current winning streak, which began with their 6-4 win over the Caps last weekend, to three games. 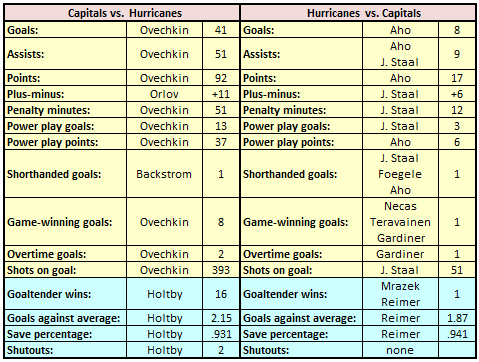 With 38 points, Svechnikov has already passed his rookie total in points (37), set in less than half the games (40) he played last season (82), and he has trampled his power play numbers from last season, improving from no goals to five power play goals this season and from five power play points last season to 14 so far this season.  His shooting efficiency has improved from 10.6 to 15.6 percent, and his ice time is up almost two minutes a game, from 14:39 last year to 16:38 so far this year.  He has taken a place as a primary scorer on whom the team depends for success.  In 15 games in which Svechnikov has a goal this season, the club is 13-2-0, and they have yet to lose at home when he posts a goal, including last week’s win over the Caps, even if it happened to be an empty-netter in the 6-4 Hurricanes win.  With Svechnikov, ice time is worth watching, even if it is to get him on ice for more shifts late if Carolina is behind.  The Hurricanes are 14-12-1 when he skated more than 15:50, 10-2-1 when he skated less than 15:50.  He is 1-3-4, plus-2, in six career games against the Caps.

Aho has become the cornerstone player for the Hurricanes, a gifted offensive player that has been uncommon, even for a franchise with its share of skilled offensive players over the years.  Among players 22 years old or younger in franchise history, Aho ranks fifth in goals (106) and could catch Jeff Skinner (115) and Geoff Sanderson (119) by year’s end to take over third place behind Ron Francis (127) and Sylvain Turgeon (139).  He ranks second in that group in career assists (127) to Francis (272), and he is third in points (233) behind Turgeon (249) and Francis (399).  He has the best plus-minus rating of any 22-or-younger player in team history (plus-38), ranks seventh in power play goals (22), and leads the group in shorthanded goals (eight) and game-winning goals (19).

Odd Aho fact… Sebastian Aho is not the only “Sebastian Aho” to play in the NHL.  The Sebastian Aho drafted in the fifth round of the 2017 Entry Draft by the New York Islanders played in 22 games for the Isles in 2017-2018.  Carolina’s version, taken in the second round of the 2015 Entry Draft, started a bit slowly this season, going 2-1-3 in his first nine games, but he has 21 goals and 33 points in his last 31 games, the 21 goals being more than any player in the league over that span, and ten goals in his last 11 games.  His performance on home ice has been a recent wonder.  He had a nine-game points streak on home ice (6-3-9) that was stopped on November 29th against Nashville.  Starting with that game, he has six points in six home games, but five of them came in a 6-2- win over Minnesota on December 7th.  Aho is 8-9-17, even, in 14 career games against the Caps.

If Petr Mrazek gets the call in goal against the Caps, it will be his 12th career appearance against Washington, tying the number of appearances he has against Montreal and a number exceeded only by the 13 he has against Florida, and the 15 he has against both Tampa Bay and the New York Islanders.  To the extent he has familiarity with any opponent, he has it against the Caps.  His record as a Hurricane against the Caps is an odd, if thin one.  Leave aside last spring’s postseason when he was the goaltender of record in all seven games of a Hurricanes’ series win, despite a save percentage under .900 (.899) and allowing three or more goals four times.  His lone regular season win against the Caps came at home last week, but it came in the game (of three appearances against the Caps with Carolina) in which he allowed the most goals (four). 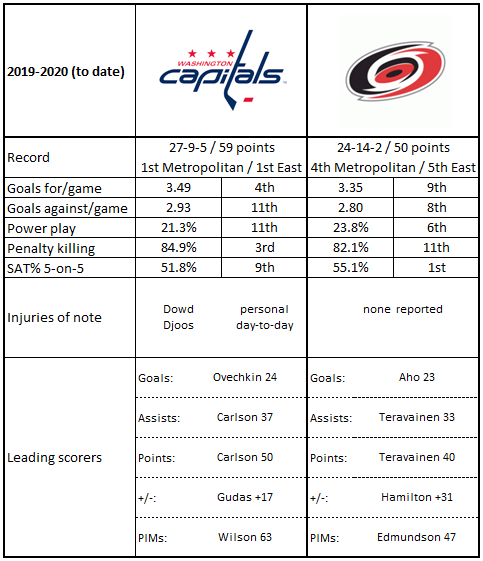 1.  No team allows fewer shots on goal per game on home ice than Carolina this season (26.6).

5.  Three teams have yet to allow an overtime goal on home ice this season -- Philadelphia, Arizona, and Carolina.

1.  The Caps are tied with Toronto for most goals scored on the road this season (79), and they have been balanced about it, scoring 19 in the first period (tied for fifth most), 26th in the second period (fourth), 31 in the third period (first), and three in overtime (tied for second).  They are the only team in the league to rank in the top-five in all periods in goals scored on the road.

2.  Washington leads the league in goals scored at 5-on-6 on the road (seven).

4.  The Caps have taken more penalties on the road (96) than any other team in the league except the New York Ranger (103).

5.  The Caps have dressed 25 skaters this season so far.  Of that group, 19 have hit at least one post or crossbar on a shot attempt.  The only one of the six who has not who appeared in at least 20 games: Radko Gudas (no iron in 41 games).

Seventeen teams passed on Teuvo Teravainen at the top of the 2012 Entry Draft.  The Caps passed on him twice, taking Filip Forsberg with the 11th overall pick and then Tom Wilson with the 16th overall pick before Chicago took Teravainen with the 18th overall pick.  And then, Chicago did not think so much of him that they wouldn’t trade him after three years with the Blackhawks in a trade Blackhawk fans might rather forget, sending Teravainen and Bryan Bickell to Carolina for a 2016 second round draft pick and a 2017 third round pick.  Chicago took Artur Kayumov with the former and the latter was traded to the Detroit Red Wings for Tomas Jurco.  Teravainen might have been moved for salary cap management reasons, but the hockey side of the deal did not and has not favored Chicago.

If Capitals fans are disappointed that defenseman Nick Jensen has not been “Michal Kempny, 2.0,” both defensemen and both trade deadline acquisitions a year apart in joining the Caps, they might be bewildered at what is going on with “Michal Kempny, 1.0.”  Kempny, who was injured late last season in a game against Tampa Bay, underwent surgery, and delayed his return to the ice this season with rehab, rejoined the Caps in Game 9 against the New York Rangers and promptly posted 11 points in his first 11 games (3-8-11).  Since then, however, Kempny has only a pair of assists on his scoring record over his last 20 games and has a minus-2 rating over that span.  He has picked up his shot frequency over that dry spell, starting it with only 10 shots in 13 games before posting 14 in his last seven games.  One constant, though, has been his weak possession numbers.  His on-ice shot attempts-for at 5-on-5 was 46.3 percent in those first nine games when he scored a point a game, and in his last 20 games it is 48.5 percent.  In both blocks it was the worst number among Capital defensemen appearing in more than one game; in the more recent block it was the only number under 50 percent among the seven defensemen appearing in more than one game.  It would be nice if Kempny could shake loose on the road in Carolina.  Since posting a pair of goals in Vancouver against the Canucks on October 25th, his only two goals on the road so far this season, he is 0-3-3 in 13 road games.  Kempny is 2-1-3, plus-1, in five career games against the Hurricanes.

The Caps are just 3-3-0 against Metropolitan Division teams on the road so far and have lost three of their last four road games against division opponents.  In those last four division games on the road the Caps allowed a total of 16 goals while scoring only 11, six of them in their only win, a 6-3 victory over New Jersey on December 20th.  This game will kick off a stretch of six division games in the next eight contests for the Caps.  If they want to avoid slipping back to the pack in the standings, they need to start taking better care of divisional business.