The Peerless Prognosticator is ON THE AIR!!! -- Game 21: Canadiens at Capitals, November 15th

The Washington Capitals return to Capital One Arena on Friday night to host the Montreal Canadiens after taking a hard-fought 2-1 Gimmick decision from the Philadelphia Flyers on Wednesday night.  The Caps will be looking to extend their current points streak to 14 games, while the Canadiens will be aiming at winning a third consecutive game for the second time this season. 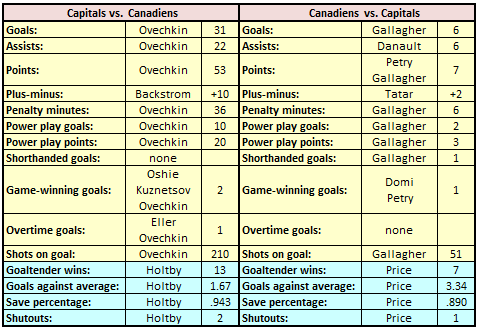 One of the ingredients in Montreal’s 10-5-3 start has been incredible balance on offense.  The Canadiens have 17 skaters with goals scored to date, six with at least five goals.  The goal scorers are led by Brendan Gallagher (eight).  Gallagher has been something of a late bloomer with his scoring touch.  In his first five seasons in Montreal, the former fifth-round draft plck (147th in 2010) averaged 22 goals per 82 games played.  Two seasons ago, his output jumped to 31 goals, and last year Gallagher posted a career high 33 goals.  With eight goals in 18 games so far this season he is on a pace to top 35 goals for the first time in his eight-year career.  Gallagher can also be a physical presence, or rather an annoying one.  He is one of those players with a knack for getting under opponents’ skin, and his 126 credited hits last season were third among Montreal forwards, perhaps surprising given his somewhat smaller stature (5’9”.184 pounds).  He has cooled off some of late.  Gallagher had seven goals in his first 13 games this season before enduring a four-game streak without one that he ended with a goal in Montreal’s 3-2 Gimmick win over Columbus on Tuesday.  In 17 career games against the Capitals, Gallagher is 6-1-7, minus-6.

Montreal’s offensive balance extends to points generally, with eight players having posted ten or more points, but none with more than 15.  Tomas Tatar and Jonathan Drouin are tied for the team lead with 15 points apiece.  Tatar has quietly become a reliable and consistent goal scorer.  After falling one short of 20 goals in his first full NHL season in 2013-2014 with Detroit, he has posted five consecutive 20-goal seasons.  That string of 20-goal seasons includes the 2017-2018 season when he recorded a disappointing four goals in 20 games with the Vegas Golden Knights after he was traded by Detroit for Vegas' first round pick in 2018 NHL Draft, second round pick in the 2019 NHL Draft, and third round pick in the 2021 NHL Draft.  The Golden Knights sent him to Montreal in September 2018 with Nick Suzuki and a second-round draft pick for Max Pacioretty.  Tatar returned to a more typical, for him, level of production with Montreal last season, posting 25 goals in 80 games as well as a career high 58 points.  He is right on pace this season, with six goals in 18 games, to finish once more in the mid-20’s in goals scored.   However, he is on a pace to shatter his career high in points, set last season (58), posting points at a 68-point pace.  Tatar is 6-5-11, plus-7, in 17 career games against the Capitals.

Jonathan Drouin might not have been the first pick in the 2013 Entry Draft.  He might not even have been the first player from his Canadian junior team to be taken in that draft (his Halifax Mooseheads teammate Nathan MacKinnon was taken first overall), but he was taken third overall by the Tampa Bay Lightning.  He was viewed as an elite talent.  As Carolina’s head of amateur scouting said in the run-up to the draft, “He’s speedy, quick and smart.  He’s got a great hockey IQ and great vision of the ice. He’s a very creative guy for a winger.  He’s a tough guy to pin in small spaces.  He’s very elusive, and he finds people. He’s got a little bit of Patrick Kane and (Jeff) Skinner in him. He’s a guy that can work off that half-wall and make some things happen. He’s a very good hockey player.”

As it turned out, he was none of those things, at least not more than intermittently, with the Lightning.  In 164 games over three seasons he posted 29 goals and 95 points.  And, his temperament became an issue when in January 2016 he was suspended by the club for his failure to report after being assigned to the AHL affiliate Syracuse Crunch.  He did report in March, but the damage seemed to be done.  He was traded that June to Montreal with a conditional sixth-round pick in the 2018 NHL Draft for Mikhail Sergachev and a conditional second-round pick in 2018 NHL Draft.  While his production improved with the Canadiens (38 goals/114 points in 176 games to date), he has not yet achieved the elite status one might have foreseen for a third-overall draft pick.  At age 24, this might be the season in which he at least takes a step in that direction; he is on a pace to set career highs in goals (32) and points (68).  Drouin has points in 12 of 18 games this season, and the Canadiens have a record of 8-1-3 in those contests.  Drouin is 0-4-4, minus-10 in 11 career games against Washington. 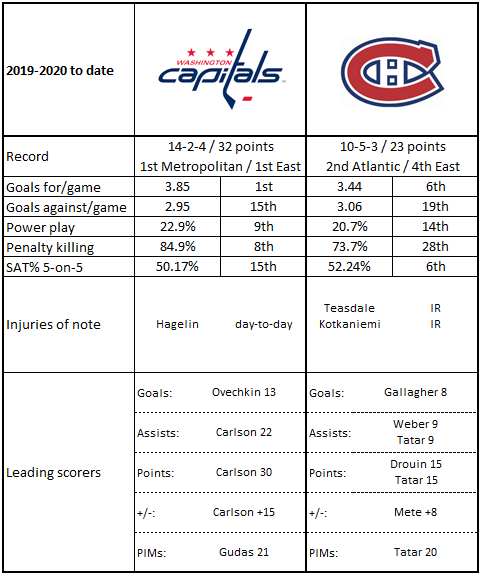 1.  Montreal has struggled keeping opponents off the scoreboard on the road this season.  In five of nine games on the road so far, the Canadiens allowed four or more goals, three times allowing five or more.

4.  If the game is a blowout, you would think it would favor Montreal.  They are 5-1-0 in decisions of three of more goals.  Two of those wins have come on the road – 5-2 in St. Louis over the Blues on October 19th and 4-1 in Arizona against the Coyotes on October 30th.  On the other hand, their only such loss also came on the road, 4-1 in Dallas to the Stars on November 2nd.

1.  Washington has been charged with more penalties than any other Eastern Conference team (78).

2.  The Caps might invest some time in target shooting practice.  Their 270 missed shots rank second in the league to Toronto (273).

The Canadiens spent most of their storied history building a rich and deep history of elite goaltending.  From George Vezina, who tended goal for the first Canadiens NHL team in 1917-1918 to Patrick Roy, who last played for the Habs in 1995-1996, with George Hainsworth, Jacques Plante, and Ken Dryden, among others, in between.  Goaltending was a hallmark of Canadiens hockey.  But since Roy left under unpleasant circumstances, there have been mostly forgettable seasons by Montreal goalies.  That would change when Carey Price was taken with the fifth overall pick in the 2005 Entry Draft.  After two seasons in the AHL, Price started 40 games as a rookie in 2007-2008, winning 24 games.  Since then, he compiled a record in which he stands at or near the top in almost every meaningful statistical category for goalies in franchise history: games played (639/first), wins (330/first), shutouts (45/fourth), goals against average (2.47/eighth; minimum: 100 games), save percentage (.918/fifth; minimum: 100 games).

What Price does not have that goalies like Vezina, Hanisworth, Plante, Dryden, and Roy have is a Stanley Cup.  He has been to the postseason eight times, never having won a playoff game past the second round (the Canadiens were swept in the Eastern Conference final against the New York Rangers in 2014).  At 32 years of age, he might not be the heavy workload goalie on whose back the Canadiens fortunes reside, especially after enduring a series of injuries (concussions and lower body injuries for the most part) that cut into his playing time.  After a four-year run in which he went 125-58-16, 2.16, .928, with 20 shutouts; he was a combined 51-50-13, 2.75, .910, with five shutouts over the last two seasons preceding this one.  He has improved some so far this season (9-4-2, 2.65, .916, with one shutout), but he is not the “Carey Price” of a few years ago.  In 26 career games against the Caps, Price is 7-14-5, 3.34 (worst against any Eastern Conference team), .890 (also worst against any Eastern Conference team), with one shutout.

One would think that with a back-to-back set of games next on the Caps’ schedule (they travel to Boston on Saturday), Ilya Samsonov will get one of the starts to open the weekend.  Samsonov is the second-highest draft pick among goalies in Caps history (22nd overall in 2015; Olaf Kolzig was taken 19th overall in 1989), and with Braden Holtby and Philipp Grubauer manning the nets since then, the Caps could afford bringing him along slowly.  After spending three seasons with Magnitogorsk Metallurg in the KHL after being drafted, he to North America and skated with the Hershey Bears last season, going 20-14-2, 2.70, .898, with three shutouts, and then going 2-3, 2.99, .897 in the postseason.  The Caps deemed this a sufficient apprenticeship to serve and kept him with the big club to open this season, sending last season’s backup, Pheonix Copley, to Hershey.

The decision to keep Samsonov has paid dividends.  He allowed a single goal in each of his first two NHL starts, both on the road (at the Islanders and at Dallas).  He took the loss in relief of Braden Holtby in a 6-3 loss to Colorado in his third appearance, but then he won three consecutive starts to become the first goalie in franchise history to record wins in each of his first five NHL starts.  He lost in his sixth start, a Gimmick loss to Arizona on Veterans Day, but he is on a pace to take his place among the winningest first-year goalies in team history.  He is unlikely to match the 18 wins Jim Carey had in his first NHL season (1994-1995), but he is almost half way to the second highest win total for a first-year goalie in team history (Jim Bedard had 11 wins for the 1977-1978 Caps, although he did lose 23 games that season).  Samsonov has not faced either Montreal or Boston in his brief career to date.

This has been an odd series.  The Caps can’t seem to lose in Montreal, going 14-1-2 in their last 17 visits there.  On the other hand, Montreal has done very well in Washington, going 6-3-1 against the Caps in their last ten visits.  But in the here and now, the Caps are 5-0-1 in their last six home games, outscoring opponents, 27-13.  They have been solid on special teams in that span, posting a 23.8 percent power play and an 86.7 percent penalty kill.  On the other hand, the Canadiens have earned points on the road, but they remain a team with a winning percentage under .500 (4-2-3 in five games), and their penalty killing on the road has been mediocre (77.1 percent/19th).  Montreal has offensive balance, but the Caps have superior firepower that is bringing all guns to bear lately.  The one-goal result in Philly is a hiccup in that pattern as they get healthy with home cooking.