The Peerless Prognosticator is ON THE AIR!!! -- Game 4, Senators at Capitals

But tonight, the Caps have an opportunity to shake the lingering rust of the off-season from their creaky joints, because the Ottawa Senators are in town, and…


“Ah rahze to challenge the assertion implahed in the comment of mah good friend from the Commonwealth of Virginnya that the Senatuhs are, how maght you call it… pushovahs?”
You sound like a Senator…


“That ah am, my friend. Ah represent the great state of Consternation ovah your comments about the Senatuhs.”
Forgive me, Senator, but you don’t exactly sound as if you hail from Ontario.


“Son, you are no doubt a-way-ah that Ottawa is in ‘suth'n’ Ontario?”
I guess you would have a point, but about the hockey team…


“Ah know what you are implyin’…what you are suggestin’…what you are hintin’ at… and Ah am hee-yuh to inform you that the Ottawa Senatuhs are a prideful tribe of Senatuh…”
Proud of that 32-win season last year, Senatuh…uh, Senator?


“Indubitably…”
I think I see the Senators’ problem last year.


“And that is…”
Not enough milestones.

Well, if milestones are the tonic to cure the Senators, it does not appear that any are on the horizon of the kind reached by Alfredsson, Gonchar, and Kovalev last season, unless “fastest to minus-10 to start a season" is a “milestone” (Alfredsson is a league-worst minus-six heading into Friday action). That is, unless Chris Neil has four assists in him to get to 100 for his career, or Gonchar has three power play goals to get to 100 for his career. As for the rest of last season, here is how the Caps and Sens stacked up… 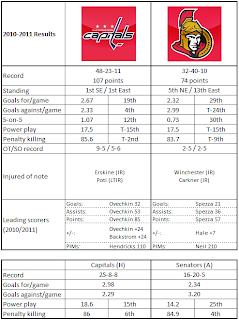 One Senator who does have a legitimate milestone in sight is goaltender Craig Anderson. With 99 wins he can hit the 100 mark with a win over the Caps. But it looks as if it will not happen against the Caps. Looks like he is sitting this one out. Too bad…for Caps fans. He has struggled mightily in his four appearances so far this season. He has allowed fewer than four goals only once in those four appearances and has numbers that boggle the imagination. His goals against average is 5.07, good for 32nd in the league and dead last. His save percentage is .853, good for 31st in the league and next to dead last. No goalie comes close to having allowed the 19 goals he has give up so far (Columbus’ Steve Mason is next with 12). But then again, no goalie has seen the rubber he has, either; Anderson has faced 129 shots (Dallas’ Kari Lehtonen is next with 117). But here is where it might get better for the Caps. Anderson’s backup, if you can believe this, has worse nunbers – Alex Auld has a GAA of 6.32 – last among 42 goalies appearing in NHL games so far. Ditto for his save percentage of .818. But then again, that is in only 19 minutes of work.

Which Brings Us To…

The defense. The motto for this bunch might be “shared pain.” Seven defensemen have dressed for the Senators so far, and all of them are buried under the “even” line at plus/minus. In four games, none have been on ice for fewer than four goals. And Chris Phillips, who has seen much better days – both for himself and his team – has been on ice for a whopping nine goals in four games. No defenseman has seen more rubber fly into his own net (only Tampa Bay’s Eric Brewer has seen as much). And Phillips has been on the ice for four power play goals against, again “tops” (depending on your point of view) in the league. And that goes a long way to explaining the…

Only Dallas has surrendered more power play chances than have the Senators, and only two teams – St. Louis and San Jose – have worse kill rates than the 68.2 percent the Senators have. If there is a glimmer of hope here for the Senators it is that they have been quite respectable in killing off penalties in two road games – 12-for-14 (85.7 percent).

Twelve goals in four games puts the Senators squarely in the middle of the pack in goal-per-game rankings (tied for eighth with seven other teams), which means “not enough to make up for a terrible defense.” They have played games close, with a pair of one-goal losses (one in the Gimmick) in their four games to date. They have some balance in scoring – eight players have recorded goals so far. But of those players with goals, they have a combined plus-minus of minus-23. This team does not score nearly enough to make up for serious shortcomings on defense.

Rules are made to be broken…stomped on, and ground into a fine powder.

One thing the Senators appear quite adept at is finding the penalty box without guidance. Chris Neil and Zenon Konopka sit one-two atop the NHL penalty minute rankings (25 and 24 apiece, the only club with two 20-minute players in this category). Konopka is the only player in the league to have recorded two fighting majors so far, and the Senators have more fighting majors (four) than any other team. They have much to be angry about.

In 21 career games against Washington, the former Capital is 4-15-19, minus-1. He is 2-13-15 on the power play. So far this season he has one power play point (an assist) after being the Senators’ second leading power play scorer last season (5-15-20, tied for 19th in points among all defensemen). He has been on ice, though for five of the six power play goals the Senators have. That would be more power play goals/on ice than the total power play goals scored by 28 other teams. Things happen when he is out there with the man advantage.

Assuming that: a) Michal Neuvirth will be handled gingerly with his “lower body” injury, and that b) the Caps will reward Vokoun for his 39-save effort against Pittsburgh, then Vokoun would seem likely to get the start against the Senators. And boy, does he suck against Ottawa. 3-11-0 in 15 career games, 3.36 GAA, and a .897 save percentage. He does have one shutout, that coming in the 2008-2009 season. But over the last two years Vokoun is 1-5-0, 3.21, .890 against the Senators.


1. Stay Alive, Avoid 4-on-5. Ottawa happens to have the third-best power play in the league (31.6 percent), as of early Friday, and the fourth-best road power play (36.4 percent). Eight different Senators have power play points in four games, Erik Karlsson (0-5-5) and Milan Michalek (2-2-4) teaming up to be an effective pair.

3. Steady pressure. No team has allowed more first period goals than Ottawa. That also goes for the second and third periods, too. There are bound to be opportunities over all 60 minutes.

There might not be another team at the moment to cure what ails the Caps quite like the Senators. Although the season is young – four games for the visitors – the Senators have demonstrated themselves incapable of keeping pucks out of their own net so far. And for a team that would like to get Alex Ovechkin back to his dominating self (23 straight games without a multi-goal game; only one in his last 42, including playoffs), get Nicklas Backstrom lighting the red light (no goals in 20 games, and counting), and generally would like to get the power play going a little more energetically (only one of three power play goals has come in regulation), the Senators are made to order for Washington.

That’s on paper. Let’s face it, the Caps should end the competitive portion of this game in the first 20 minutes, but we know the Caps have had some issues closing out opponents in games like this. It will be especially tricky coming off a game against a big rival.  That makes this game a good test of the new found “accountability” and “maturity” this team says it has. But as soon as the Caps think Ottawa a “pushovah,” to quote the Senatuh, that’s when a team will rise up and take a big bite out of their bee-hind. We think the Caps will skate off with their collective bee-hinds intact. They’d better, or we might find we’re dealing with the “Same Old Caps.”

But if there is motivation, consider this. With a win on Saturday the Caps will tie a franchise record for consecutive wins to start a season. They’ve done it twice, and the last time they did it was in 1997, which happens to be the only season in which the Caps played in a Stanley Cup final.

Time (def.): the measured or measurable period during which an action, process, or condition exists or continues : duration; a nonspatial continuum that is measured in terms of events which succeed one another from past through present to future.

Three games might not be enough time to arrive at any conclusions about time, but it might be time to make a comparison between similar groups of Caps and time…

Last season, the Caps opened each of their first three games with a third line of Eric Fehr, Marcus Johansson as a rookie, and Jason Chimera. In those games the trio had average total and even-strength ice time as follows (with their respective scoring lines):

Compare that to the trio who started the first three games on that third line last season (with their respective scoring lines):

This is a group that has – in a brief and small number of instances – been given more opportunities in terms of ice time, averaging substantially more even strength ice time than their 2010-2011 counterparts. And they have (so far) delivered, contributing four of the Caps’ 12 goals scored to date. That is a bump over the three of 12 the third line recorded in the first three games last year.

But the current edition of the third line has been on ice for few opposition goals – Laich and Ward for two, and Chimera for one of the seven even-strength goals scored against the Caps so far. Last year’s edition was on for a similar number of fewer goals (Fehr, Johansson, and Chimera for two apiece of the six even strength goals scored against the Caps in the first three games of the season) and in shorter chunks of even strength ice time.

It is early, but in time, this third line could be the two-way contributor that the Caps haven’t had to support the big guns on the top two lines of the forward group.
Posted by The Peerless at 6:48 AM No comments: