The Peerless Prognosticator is ON THE AIR!!! -- Game 36: Sabres at Capitals, December 30th

“Listen, and understand! That Terminator is out there! It can't be bargained with. It can't be reasoned with. It doesn't feel pity, or remorse, or fear. And it absolutely will not stop, ever, until you are dead.”

That was Kyle Reese explaining to Sarah Connor the futility of doing battle with the Terminator in the 1984 film, “The Terminator.”  It sounds like a certain hockey team.  One that has lost just one game in regulation time in almost six weeks, compiling a 15-1-1 record along the way that includes an eight-game winning streak that they hope to extend on Wednesday night.

The Washington Capitals are a team that cannot be reasoned with at 5-on-5, cannot be bargained with when it goes on the power play, and feels neither pity, remorse, nor fear when killing penalties.  Over the first 35 games of this season, and especially the last 17 in which they compiled that 15-1-1 mark, they have not stopped, ever, until they defeated their opponents.

They have faced 22 of the 29 other teams in the league so far this season, and they have wins over 20 of them.  Only the San Jose Sharks and Dallas Stars have defeated the Caps without tasting defeat of their own, and the Caps have rematches with both clubs on the schedule to come.

But that 15-1-1 record is something worth unpacking.  Here are the particulars: 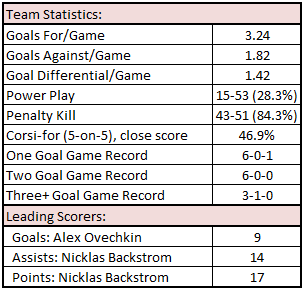 It isn’t that the Caps are eking out victories on the good side of “coin-flip” games; they are blowing by opponents with a 1.42 average positive goal differential and 12 of their 15 wins coming in multi-goal decisions.

Washington has had 19 different skaters record points over this 17-game span, and 14 different players have goals.  There is the usual yin-yang of complementary forces that is the Alex Ovechkin/Nicklas Backstrom pair.  Ovechkin leads the team with nine goals (9-5-14, plus-6), while Backstrom leads in assists (3-14-17, plus-6). But there is the emergence of John Carlson as a force on the blue line, too.  He is 3-12-15, plus-4, over his last 16 games (he missed Monday’s contest against the Buffalo Sabres to a lower-body injury).  He certainly compares well to the man he replaced as the go-to offensive force from the blue line, Mike Green (2-11-13, minus-7, in 30 games overall this season with the Detroit Red Wings).

The Caps have also had significant contributions from players down the roster.  For example…

The youngsters have stepped up, too…

While the offense has been prolific and balanced, the key to the Caps’ success has been at the other end of the ice, specifically the goaltending tandem of Braden Holtby and Philipp Grubauer.

In 15 appearances over these 17 games, Holtby is 13-0-1 (one no-decision), 1.78, .944, with two shutouts.  He has not allowed more than three goals in any appearance (although he did allow three goals on 12 shots in 28:57 in a 5-3 win over Tampa Bay on December 18th), and he has allowed two or fewer goals 11 times in those 15 appearances.  He stands alone atop the leader board among goalies in almost every meaningful statistic: wins (23), goals against average (1.85), save percentage (.935); and he is tied for eighth in shutouts (2).  He has not lost a game in regulation time since November 10th, a 1-0 loss to the Detroit Red Wings.  Only once this season has he allowed more than three goals in a game, that being in a 5-2 loss to the New York Rangers on November 3rd.

Meanwhile, Philipp Grubauer shook off a shaky start (2-2-1, 2.79, .896 in his first five appearances, including a 4-1 loss to Florida as the only regulation loss in this 15-1-1 run) to win in each of his last two appearances.  The first was a 31-minute, seven-save performance in relief of Holtby in the win over Tampa Bay.  The other was a fine 31-save effort in the Caps’ 2-1 win over the Carolina Hurricanes on December 21st.

The first instinct one might have as a Caps fan is to compare this run with the 14-game winning streak in the middle of the 2009-2010 season in which the Caps won the Presidents Trophy for the league’s best record.  Frankly, they don’t compare.  The current run might be considered as a “once-in-decade” sort of event; the 14-game streak was more of a “once-in-franchise-history” occurrence.  The Caps outscored opponents by an average of 4.79 to 2.36 in that streak, the 2.43 average positive goal differential straining belief.  The power play in that streak was 17-for-55 (30.9 percent), while the penalty kill was a respectable, if less than impressive 53-for-65 (81.5 percent).

That said, this run has a different look to it.  On the one hand, no team is going to win 15 of every 17 games it plays over the course of a season.  On the other hand, the Caps have not had to rely on a small group of contributors to sustain it.  And that is the difference between that streak and this run, between the 2009-2010 team and this one.  This team looks better able to sustain a level of performance at both ends of the ice than that gifted 2009-2010 was able to muster, although we would certainly like to see their possession numbers improve (if the team has an Achilles' heel, this is it, given how long they have had possession issues).  It is a team that can put you down and keep you down, as evidenced by Washington's league best 20-1-0 record when scoring first.

And that is why the old saying seems to fit as the Caps prepare to host the Buffalo Sabres in the second half of their home-and-home set of games… “bet the streak.”

The Washington Capitals made it eight wins in a row on Monday night in Buffalo as they defeated the Sabres, 2-0, behind a 31-save effort from goalie Braden Holtby.

A scoreless first period was remedied early in the second period on Alex Ovechkin’s 18th goal of the season at the 19 second mark. The Caps were enough of a nuisance in the Buffalo end to force Sam Reinhart into a weak clearing attempt up the right wing wall that did not reach the blue line. T.J. Oshie batted the puck back down the wall into the corner where Nicklas Backstrom fished it out. Backstrom centered the puck for Ovechkin all alone in the low slot, and Ovechkin snapped it past goalie Linus Ullmark to give the Caps the lead.

The goal held up for 12 minutes when the Caps doubled their advantage. It was another case of the Sabres’ inability to get the puck clear of their own end. Tyler Ennis’ cross ice pass found no teammate and bounced off the far wall, where Tom Wilson collected the puck and fired it at the Sabres’ net. The shot went wide and bounced hard off the end wall, the puck landing on Jay Beagle’s stick at the top of the crease. Beagle wasted no time in swatting the puck past Ullmark to make it 2-0 with 12:55 gone in the period.

That left things up to Holtby, who preserved his shutout with a spectacular save on Evander Kane in the last minute of regulation. It was Buffalo’s last gasp, the Caps skating off with the 2-0 win.

-- Not an excuse for the shots (or the shot attempts, which favored Buffalo, 56-50), but a credible reason.  The Caps were missing their top defensive pair.  Brooks Orpik missed his 21st straight game on Monday night.  His partner, John Carlson, was a game-time scratch with a lower-body injury, ending his consecutive games played streak at 412.  It is the second longest consecutive games streak in franchise history, ten short of Bob Carpenter’s record of 422.

-- Carlson’s absence meant that Connor Carrick got a sweater for the first time this season and the first time for the Caps since April 13, 2014.  He did well, given his sheltered minutes (a total of 9:19 for the game).  He was plus-1 and recorded two shot attempts (one on goal).

-- Carlson’s absence, along with Orpik’s, had further ripples through the lineup.  Matt Niskanen logged 27:25 of ice time, a season high for a game settled in regulation time (he skated 27:38 in an overtime loss to the Winnipeg Jets on December 5th).  Karl Alzner skated a total of 26:23, exceeding his season high in ice time by more than two minutes (24:05 on December 12th against the Tampa Bay Lightning.

-- T.J. Oshie got back on the score sheet with an assist after consecutive games in which he was shut out.  He is 5-4-9 over his last seven games.

-- If folks are concerned about Alex Ovechkin’s goal scoring, don’t be.  His 18th goal of the season lifted him into a tied for fifth place in the league, and he has played in fewer games (34) than any of the four players ahead of him.  Last season, when he finished with 53 goals, he had only 16 goals in his first 34 games played.

Some games you just have to grind out.  This was one of them.  Call it a “system” win if you want, or all of the players “pulling on the rope,” or “no passengers,” or whatever cliché you wish to use.  The team stepped up as a group to fill in the holes left with the top defensive pair out, they got timely goals from an expected source and a good luck charm of sorts, and their insanely hot goalie took care of the rest.  You don’t want to do it like that all the time, but it is the sort of learning experience in toughing out games that can pay dividends down the road when results are harder to come by.