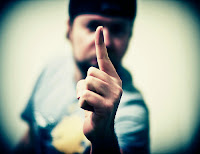 Well, now we know the wisdom behind the phrase, “play for 60 minutes.”

Actually, 59:59 would do for the Caps to escape Newark with a point in the standings, as Alex Ovechkin scored a doorstep goal with one tick left in regulation to earn the Caps the point in a 6-5 shootout loss to the New Jersey Devils.

This was one of those games that one might have figured the Caps were going to lose, no matter what. They fell behind early (an unlikely goal from David Clarkson at 1:09), gave up yet another first minute goal (Jamie Langenbrunner at 41 seconds of the second period) and generally looked pretty indifferent on defense most of the night. If giving up five goals can be said to be a good goaltending performance, then Jose Theodore had one. The Devils that took the ice tonight shouldn’t score more than two goals against anyone (they’d gone four in a row without doing so), but if you’re going to go out, stand around, and watch things go on around you in your own end…well, five goals happens. Theodore was especially good in the first, when the Devils had several point blank chances, as the shot chart for the period indicates… 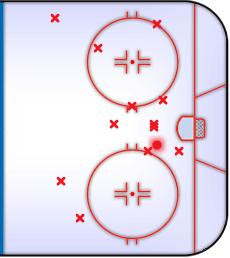 Perhaps it was too much a case of finding the possibilities against Scott Clemmensen, returning to the nets for a second consecutive evening for the Devils, a little too mouth-watering for any attention to be paid to the other end of the ice. And a few Caps certainly had big evenings. None had a bigger one than Nicklas Backstrom (how fat is he now?). The center had his first five-point game as a Cap (he had three four-point nights in his rookie year), his 1-4-5, +3 putting him now on almost a point-a-game pace for the year (2-14-16 in 17 games). He is 2-10-12, +10 in his last four games (still think he’s fat?).

Backstrom wasn’t alone. Alex Ovechkin was 2-1-3, +3 himself. He had a whopping 20 attempted shots (12 of them on goal), three hits, and a blocked shot. His night left Ovechkin 4-6-10, +11 in his last four games (about that "slump?"...over). Add in goals by Tomas Fleischmann, who had another night of several highlight reel stickhandling moves (if he ever starts finishing these, Caps games are going to be track meets), and Viktor Kozlov, and it was a good night for the offense.

It was a night, though that had just too many breakdowns and too much passivity in their own end for the Caps. And some guys had difficult nights individually. We’re not sure what to make of Chris Clark. He came into the game without a point since the third game of the year (his only point this year) and was not on the plus side of the ledger in seven straight games. He finished this game scoreless and minus-2 (although he certainly had no hand in the Devils’ fifth goal, by Brian Gionta, but we’ll get to that).

Michael Nylander is another player who has us scratching our head. He came into this game with one point in his last seven and left this one scoreless (and minus-2 to go to -4 in his last eight games). It’s worth noting that Nylander and Clark both logged about 12 minutes tonight. For Nylander, it was his second lowest amount of ice time this season. To complete the comparison, the 12:52 was the second highest time on ice total for Clark in his last nine games.

Some other things we saw…

Mike Green had a rather quiet night, and that’s not altogether a good thing. He looked to have underestimated the speed of Patrik Elias entering the Capital zone in the final period, but even with that he seemed to have a decent angle to foul the rush by Elias. But Elias got his shot away cleanly over Jose Theodore’s glove to score the Devils’ last goal.

The home-and-home might not have been tougher on anyone than it was on the Devils’s John Madden. Last night, Madden did his defensive thing, finishing the game even and winning eight of 12 draws. He was on the ice for only one of the Caps’ three goals. Forward to tonight…Madden was on the ice for all five Washington goals, won 13 of 24 draws, and finished -3. Bet he’s feeling 35 tonight.

The best player on the ice for the Devils might have been the one that didn’t get a goal. Travis Zajac had three assists, was plus-3, and abused Michael Nylander in the faceoff circle (winning five of six on his way to splitting 22 draws).

From the “reward a player for hustle” file, Donald Brashear got 10:56 in ice time tonight, following up on the 11:17 he got last night. It’s the first time Brashear has had consecutive double-digit results in ice time since January 1-3 last season.

If you’d have told me that the Devils would get only one shot on goal from Zach Parise tonight and seven from David Clarkson, I’d have been thinking Theodore would have had a shutout. The Caps just let too many secondary contributors who hadn’t really contributed much lately for the Devils too much freedom to roam. It was, for example, the first time since the first two games of the year that Patrik Elias had goals in consecutive games (Elias had a pair in this one). Gionta had two goals total in 15 games before netting one in this one. Ditto Jamie Langenbrunner, and he hadn’t scored one in seven games.

But since losing to Buffalo, 5-0, on the first day of the month, the Caps are now 5-0-2, and this was the first of those seven games in which the Caps gave up more than two goals. As if one needed reminding, offense makes the highlights, but defense wins in the end. All-in-all, a point earned is a good thing, especially when you didn’t even have that with two seconds left. It isn’t the best way to start on a trip west, but it isn’t the worst way, either. Nice job getting the point, boys.
Posted by The Peerless at 11:51 PM 1 comment: