What to get the pest who has everything 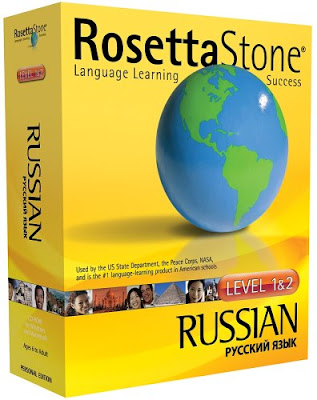 ...if he wants to be understood by certain goalies, anyway.
Posted by The Peerless at 3:05 PM 2 comments:

The Curious Code of Playoff Hockey 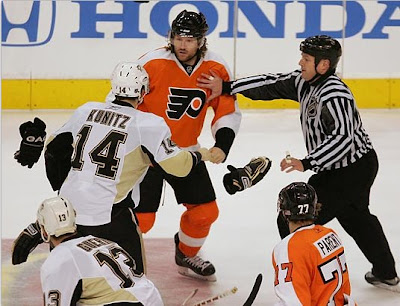 While Caps fans have been enthralled at the performance of Simeon Varlamov, a curious dynamic is unfolding in another Eastern Conference quarterfinal, that between the Philadelphia Flyers and the Pittsburgh Penguins. The Penguins won game 1, escaped with an overtime win in game 2, then went to Philly and had their hats handed to them in game 3. It is in that game 3 that something interesting took place.

Phil Sheridan over at the Philadelphia Inquirer describes a sequence of events that include Chris Kunitz, Kimmo Timonen, and Scott Hartnell that actually started in game 1 of the series, when Timonen was injured by Kunitz, and ended when (as Sheridan put it), "Hartnell tracked down Kunitz, got his attention, and the two fought near center ice" after Kunitz took another run at Timonen. It was an episode that is part of a broader ethic that dominates this time of year, one described by Flyer captain Mike Richards...

"That's probably our strategy for [Sergei] Gonchar and for [Sidney] Crosby and [Evgeni] Malkin. Every chance I get, I try to hit Malkin, I'm trying to hit Crosby, and I'm taking runs at Gonchar, too. It's playoff hockey. That's what you try to do, you try to get them off their game."

It is a code that is understood by both giver and receiver, and those who would be the arbiters of justice who don't wear stripes on their shirts. And it is in that last role where the code of playoff hockey takes a curious, if not wholly unexpected turn. In describing the events that unfolded, it was left to Scott Hartnell -- the player who would exact a measure of payment from Chris Kunitz for his taking liberties with Timonen -- who offered this...

"You can say whatever you want about the hit, but [Kunitz] showed some guts and class dropping the mitts. I just wanted to get there and let him know it's not going to be taken lightly, hitting our best players (emphasis added)."

Only in hockey could you find, in one sentence, recognition of a harm done to a teammate, the intention -- the fulfillment of the code -- that it not go unpunished, and the player applying that punishment praising the perpetrator for standing up and answering for what he did in the first place.

Email ThisBlogThis!Share to TwitterShare to FacebookShare to Pinterest
Labels: playoffs, the code

Back to the Future