Conor Sheary might not get enough credit as a goal scorer (he has averaged 19 per 82 games over his career), but he’s not “elite.”  He might be a better playmaker than one might think (he averages 20 assists per 82 games over his career), but he is not “elite” here, either.  He does not take enough penalties to be thought of as “dirty” (he averages 16 penalty minutes per 82 games).  But Sheary has carved out a nice career out of being a hard-worker who can be a pest in hunting down pucks, putting himself in hard areas to convert chances, and being willing to take (and give) hits to make a play, despite his slight stature (5’9”/178 pounds, the shortest and third-lightest skater to play for the Caps this season).  Not that any of this kept him from one of his best seasons in seven years in the NHL. 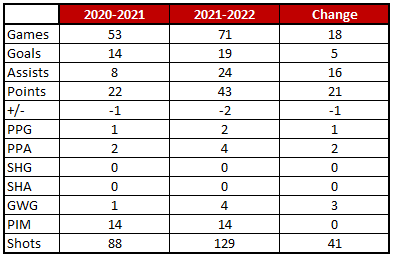 Game to Remember… March 5th vs. Seattle.  They all count if they cross the goal line.  Whether a snipe from the top of the circle, a snap shot from the slot, punching the puck in from a goalmouth scramble, they al count.  And that goes for empty netters, too.  When the Caps hosted Seattle in early March, they were looking to close out a three-game home stand with a winning record after splitting games against Toronto and Carolina.  Conor Sheary was looking to extend a personal run of good fortune after going 1-4-5, plus-1, over a six-game stretch.

The Caps scored a pair of goals 34 seconds apart in the first period to take a 2-0 lead over the Kraken.  Seatlle tied the game with a goal late in the first frame and another less than a minute into the second.  Midway through the period, the Caps regained the lead when, on a power play, John Carlson fed Alex Ovechkin for a shot from the office.  The puck was muffled in front, but Tom Wilson corralled it at the hash marks and fired a shot that was stopped by goalie Chris Driedger.  He failed to control the rebound, though, and the puck slid to his left where Sheary out-maneuvered Jamie Oleksiak for position and tucked the puck past Driedger’s left pad to give the Caps the 3-2 lead.  Ovechkin gave the Caps a 4-2 lead less than a minute into the third period on another power play goal, and the game was sealed by Sheary late. There was a faceoff in the Caps’ end and the Kraken net empty with 2:18 to play.  Seattle won the draw but could not take control of the bouncing puck that jumped the blue line into the neutral zone.  Sheary jumped past Vince Dunn and sped off alone into the Seattle end, sliding the puck into an empty net for his second goal of the game and the 100th of his career in the Caps’ 5-2 win.  Sheary recognized the somewhat odd circumstances this way… “"It's kind of a weird way to get your 100th (goal), but I'll take it.  I think sometimes those milestones can get in your head a little bit, so to get a nice, easy one was probably maybe the best way to do it and I can put it behind me and move forward."

Game to Forget... October 16th vs. Tampa Bay.  Fresh off a 5-1 pasting of the New York Rangers in the season opener, the Caps looked to make it two in a row when the defending Stanley Cup champions came to town in Game 2 of the schedule.  It would be a close, hard-fought, low scoring affair, the teams skating scoreless until Alex Ovechkin got the Caps on the board with just over a minute to play in the second period.  The Lightning tied the game on a Mikhail Sergachev goal in the fifth minute of the third period, and that is how the teams would end regulation.  Steven Stamkos earned the visitors the extra standings point with just 15 seconds left in overtime in the 2-1 Tampa Bay win.  For Sheary, it was a miserable game.  In barely 12 minutes of ice time, he did not put up a single crooked number on his line of the score sheet, save for a minus-1 rating.  No shots, no shot attempts, no hits, no blocked shots, nothing.

Postseason… Sheary posted only a power play assist in the six-game loss to Florida in the first round.  He went without a goal on 12 shots and had a minus-2 rating.  It extended a frustrating postseason run for Sheary, who now has one goal on 44 shots in his last 28 playoff games.

Looking Ahead… Sheary will be entering the last year on his current contract when play begins in October.  His $1.5 million cap hit is perhaps a benchmark number for an extension and would not cripple the Caps financially.  He is a reasonably productive player in largely a middle-six forward role who adds grit and consistent effort to a team that generally prizes such traits.  He will be just 30 years old on opening night, and he has been rather durable, given his style of play, missing a total of 27 games over the last five seasons.  He should be the kind of player that provides little drama of a negative nature while chipping in the occasional offense.

In the End… Sheary is almost an echo of T.J. Oshie in terms of his willingness to perform the tough, often thankless jobs that invite physical abuse.  Even as Oshie does so as a player who plays bigger than his size, Sheary is more of that type of player, and this will always make one wonder if he can sustain his availability for play.  It has not been an issue in recent years, which would make Caps fans a bit more comfortable that Sheary, who had a near career year in 2021-2022, will be able to sustain that level of performance.

Posted by The Peerless at 3:28 PM No comments: