Brother, can you spare a dime (and a plane ticket)? 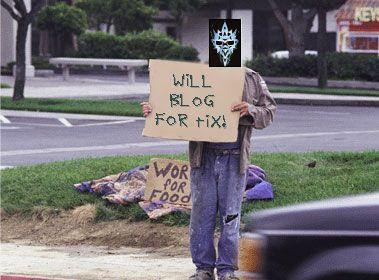 According to Kevin Paul Dupont, of the Boston Globe, the likely opponents for the NHL Winter Classic to be played on New Year's Day 2010 at Fenway Park in Boston are the Boston Bruins and the Washington Capitals.
Any donations our readers might like to make to send The Peerless (and what would he be without the cousins -- Cheerless and Fearless?) to Beantown will be gladly, eagerly, even wantonly accepted.

Thanks to The Official for the update.
Posted by The Peerless at 12:33 PM No comments:

Next up in looking at the 2008-2009 season “by the tens” we’ll look at ten other players who made a contribution. Such players, called upon to fill in when injuries strike or when other players are in a slump, are important ingredients in any team that aspires to be a winner. It is the “depth” that is essential to success. They can also be the players who in their brief appearances have something of a story to take with them and leave with the fans. These are players -- in no particular order -- who played in fewer than 30 games but who had their moments in those brief glimpses.

Talk about living the dream. Former college goalie gets tapped on the shoulder while at his desk in the afternoon to get ready to take warm-ups that night. Yeah, kid, with the Capitals. Is there a guy in the Washington metropolitan area who ever laced up skates that isn’t at least a little jealous of that guy? December 12th was certainly a big night for the big goalie, but there were a lot of folks in the stands watching him on that December night who were thrilled, too. And he still has his own player page.

For Jay Beagle, a March 2008 free agent signee by the Caps, it wasn’t so much his three regular season games that merit attention. The Caps were 1-1-1 in his cup o’ coffee with the club. But he was there at the end – the last four games of the playoff season in the second round against Pittsburgh, chosen to skate instead of Michael Nylander. He didn’t log much time – barely 14 minutes combined in the four games – but it might have been something he took back to Hershey to help the Bears on their own championship drive.

Theme: “Tonight what heights we'll hit, on with the show this is it!”

If you’re going to make a debut in the NHL, where better than to do it than in Manhattan, skating against the New York Rangers? And if you’re going to make your debut there, what better sort of game is there in which to do it than one where you get a shot on goal, a hit, and watch your team roar back from a 4-0 deficit to win in overtime. That was Andrew Gordon’s baptism into the National Hockey League last December 23rd in his only appearance with the Caps this year.

Another kid making his NHL debut this year, in this instance tending goal for the Caps on Valentine’s Day. Not that his debut was the big story, or the win he earned. That was the night that Mike Green set a record for defensemen by scoring a goal in his eighth consecutive game. But at the other end, Neuvirth stoned Vincent Lecavalier on a breakaway in the first period and went on to record 31 saves on 32 shots in a 5-1 win over the Tampa Bay Lightning. He’d follow that up with a couple of more solid performances before getting a hard lesson against the Carolina Hurricanes. He went on to do some schooling of shooters of his own in leading the Hershey Bears to a Calder Cup championship and winning MVP honors in the process, giving fans the "thumbs up" sign all the while.

Theme: “Been there, done that”

Tyler Sloan has seen a lot of North America for a 28-year old. Originally signed by Columbus in 2000, he would end up going touring a variety of AHL teams, finally ending up in Hershey. In 2007 he was invited to the Capitals’ training camp and would be signed as a free agent by the Caps in July 2008. That ended up working out pretty well. He would be an injury recall this year, playing in 26 games for the Caps. The Caps were 16-9-1 in those 26 games. Didn’t seem to hurt the Caps. But Sloan had two moments. He notched his first NHL goal against Dallas, which is always nice. But on his third shift in his first NHL game, he flattened Calgary’s Daymond Langkow, then took a bushel of retaliatory abuse from Rene Bourque, who was docked 19 minutes of penalties for his trouble (none for Sloan). He finished up the year by skating for the Hershey Bears in their Calder Cup victory over the Manitoba Moose, a team that released him… twice.

Theme: “It’s not the size of the dog in the fight…”

So, Keith Aucoin is 5’9”…yeah, right. And in the NHL program he’s 187 pounds… maybe with sand in his pockets. But Aucoin made the most of his brief stays in Washington. He was scoreless in his first four appearances, but finished up 2-4-6, plus-3 in his last eight games. Not bad for a guy who averaged barely ten minutes of ice time a game in the 12 games in which he played. And the Caps were 8-3-1 in those 12 games. Depth (Aucoin played in 38 games for Carolina in 2007-2008) is a good thing.

Theme: “Get your motor running… head out on the highway”

Bourque is probably shorter than Aucoin, and his motor might even run hotter. He had four games of duty in 2007-2008, but skated for more than ten minutes in only one of them, and skated in only one of them after November 10th. This year, he doubled the number of games played and averaged almost ten minutes. But his moment came against Buffalo, when he rifled a rebound of a David Steckel shot past Sabres goalie Ryan Miller for his first NHL tally… only 409 behind Dad.

One game… two shots, two hits, one blocked shot... and one torn spleen. And he skated with it, seeing as how he was out there for the last shift of the game. The prognosis was for a three to four month recovery period. Since the injury occurred on March 19th, that would have put him to about, well…next week at best. He played in nine games for the Hershey Bears in the Calder Cup playoffs, going 2-2-4, plus-3. The guy is an inspiration for hard work and grit.

Theme: “The long and winding road…”

On January 3, 2008, Brian Pothier was hit by Boston’s Milan Lucic. He would not skate in another NHL game for 437 days. At first post-concussion problems, and later vision problems stemming from the hit kept Pothier in a sort of “will I ever play again” limbo. But he returned to the ice on March 16th against Atlanta. He would not make a lasting impression on the game results – he was 1-2-3, even, in nine regular season games and 0-2-2, plus-1 in 13 playoff games. But his comeback was one of the best stories coming out of the 2008-2009 season.

Theme: “I want to give him the heat and announce my presence with authority!”

Six games… four wins… no losses in regulation… 2.37 GAA… .918 save percentage. Yep, here’s the keys, kid. Lead us through the playoffs. There were the obvious comparisons to Ken Dryden, who played in six regular season games in 1971 (winning them all) before leading the Montreal Canadiens to a Stanley Cup. There were important differences, though. First, Dryden was 23 when he pulled off his heroics. Varlamov wouldn’t turn 21 until the day before dressing for Game 7 of the opening round of the playoffs. Dryden had the advantage of a lifetime to that point spent in the North American game. Varlamov was playing his first season in North America. Nevertheless, there he was, a goalie who had only once in six games allowed more than two goals, thrust into the fire when Jose Theodore had a rough time in Game 1 against the Rangers.

Varlamov led a charmed life, for a time, winning six of his first eight playoff games, going 1.51, .948 with two shutouts in the process. The clock struck midnight though, and Varlamov struggled in his last five games against the Penguins in the second round, allowing at least four goals in the last four games and getting pulled in the second period of the 6-2 Game 7 loss to the Penguins. But it was an amazing performance for a goalie whose time in professional hockey could at that point be compared to the blink of an eye. He was a great story and, for a while, gave the Caps and their fans hope that a rookie could repeat the performance of another 38 years ago.
Posted by The Peerless at 12:49 AM 2 comments: