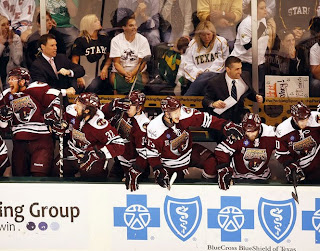 photo: Chris Knight, The Patriot News
Well, we're back after an unexpected hiatus, and it appears as though we've missed some heroics by the Hershey Bears.  The Chocolate and White are on the brink of winning the 11th Calder Cup in franchise history. As they prepare to take on the Texas Stars in Game 6 of the Calder Cup finals tonight at Giant Center in Hershey, it bears noting (so to speak) that this playoff season has been especially interesting in terms of spreading the Bears' wealth around. How?...

- The Bears have won 15 games so far, and 12 different players have at least one of the game-winning goals (Alexandre Giroux has three, Matthieu Perreault has 2, 10 others have one).

- Despite scoring 71 goals in 20 games (3.55 G/G), Hershey has only two of the top-ten goal scorers in the playoffs (Giroux with 14, Gordon with 13). But they do have seven players with at least five goals (Bourque, Perreault, Wilson, Bouchard, and Steve Pinizzotto rounding out the group of seven), almost a third of the total number of players having scored that many in the playoffs (24).

- Of the 11 shorthanded goals scored thus far, no team has more than the two the Bears recorded (Bourque, Pinizzotto).

- Michal Neuvirth is third among goaltenders in goals-against average, first among all rookie goalies in the Calder Cup playoffs (2.18).

If the Bears complete the journey tonight or Wednesday, they certainly will have done it together, as a team.
Posted by The Peerless at 12:02 PM No comments: