The Peerless Prognosticator is ON THE AIR!!! - Game 17: Devils at Capitals, February 23rd 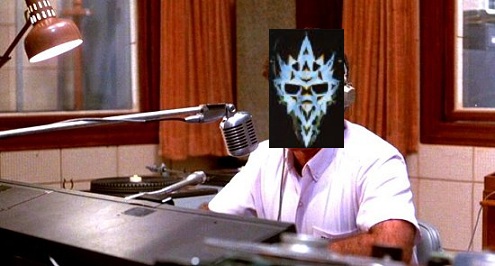 Hey, this is not a test. This is rock and roll. Time to rock it from the White House ‘cross the DMV! Is that me, or does that sound like a Bill Clinton speech?  Hey, DMV…. Oh, hey, DMV. DMV me, DMV me. Why don't they get a rope and impeach me?

Hey, is it a little too early for being that loud? Hey, too late. It's 0600. What's the "0" stand for? Oh, my God, it's early. Speaking of early, how about that Cro-Magnon, Marty Dreiwitz? Thank you, Marty, for "silky-smooth sound." Make me sound like John Boehner!

Picture a man going on a journey beyond sight and sound. He's left the real world. He's entered the Senate Chamber. All right. Hey, what is this "Senate Chamber"? What do they mean, "World’s Greatest Deliberative Body"? Sounds like a couple of cops in Dupont Circle, "You know, she looks pretty to me." Hey, whatever it is, I like it because it gets you on your toes better than a bowl of Ben’s chili.

"Oh, Peerless. Peerless. What are you doing, Peerless?" Oh, Hannity, you hack. You've been down on everything but the Keystone Pipeline. Stop it right now.

Albert, what town do you represent?

Well, thank you, Albert. What's the weather like out there?

"It's hot. Damn hot! Real hot! How’s THAT for an inconvenient truth?!"

Well, can you tell me what it feels like.

What do you think it's going to be like tonight?

"It's gonna be hot and wet! That's nice if you're with a lady, but it ain't no good if you're on the Mall."

Thank you, Albert. Here's a song coming your way right now. "Nowhere To Run To" by Martha and the Vandellas. Yes! Hey, you know what I mean!

Maybe it is too much, but then again, maybe now the New Jersey Devils are out of bed and feeling a little groggy.  It can only help, because for the Washington Capitals it is like the song says, “nowhere to run to.”  They are in 15th place in the Eastern Conference, 30th in the NHL.  There is no longer anywhere to run to.  They have to win… now… today.  And Tuesday.  And Wednesday.

But today at high noon they get the New Jersey Devils in the second half of their double-header at Verizon Center.  We covered the particulars in the prognosto on Thursday, so let’s get right to the keys…

2.  Stay out of the box.  The Caps are 24th in penalty killing this season.  Only seven teams have found themselves shorthanded more often.  That’s a really bad mix.  What it means is that only Detroit has allowed more power play goals than have the Caps.  They have not won a game in regulation when allowing the opponent more than three power play opportunities. While they are 10-12 in penalty killing against the Devils in two games, the problem number there is “12.”  Too, too many opportunities.

3.  Memory loss.  The Caps are the only team – the only team – in the NHL that does not have a winning record when leading after two periods.  If they get a lead after 40 minutes, maybe they need to forget the good stuff that got them there and treat the third period as 0-0.  Stay thirsty, my friends… for wins.