"Brian Burke made his first move as general manager of the Toronto Maple Leafs on Wednesday, acquiring forward Brad May from his former club the Anaheim Ducks.

"In exchange, the Ducks receive a conditional sixth-round draft pick in 2010. The move reunites May and Burke for the third time, after sharing stints with the Ducks and Vancouver Canucks."

I know...Brian Burke's first trade with Toronto is for a slugger...you're shocked, too.
Posted by The Peerless at 1:41 PM No comments:

It's one thing for players to engage in some trash talking and the raw emotions of post-game interviews that elicit quotes of an unflattering or accusatory nature with respect to the opponent. But from the media?

"For the second time in as many games against Washington, the Flyers kept [Alex] Ovechkin (five shots) scoreless. Ovechkin did land heavy hits on Luca Sbisa and Jeff Carter (borderline kneeing)."

"Borderline kneeing?" The only "knee" Ovechkin seemed to get was his teammate's, Chris Clark.

"Capitals star [Alex] Ovechkin was held without a goal but raised the ire of the Flyers' bench when he ran at rookie Luca Sbisa and tried to take out Jeff Carter coming out of his end."

Well, gee... Sbisa's a rookie. You go at him early and often with the aim of getting him to cough up the puck. "Tried to take out" Jeff Carter? Guess that's Philly code for "looking for an open ice hit."

"Even before the game began last night, a full day before, really, the Capitals started revving up for the Flyers, trash-talking in the Washington Post. Defenseman Shaone Morrisonn maligned the Flyers fans, accusing them of rocking the Capitals' team bus outside the Wachovia Center after Game 4 in last year's playoff series and 'mooning them' as the bus pulled away. He even brought up the infamous Santa Claus incident. As if Philadelphia hasn't heard enough about the booing of St. Nick."


Alex Ovechkin is dirty (a guy who has 46 penalty minutes this year, tied for 82nd in the league)...Shaone Morrisonn didn't say nice things about Philadelphia. This from the town whose hockey team dresses Scott Hartnell (he of the 159 PIMs for the Flyers last year), Riley Cote (202 PIMs last year), and Josh Gratton (55 PIMs in only 18 games this year) -- none of whom are on any short list for the Lady Byng Trophy -- and that could claim as part of their sports history Chuck Bednarik and Reggie White on the gridiron; Dave Schultz (whose nickname, it's worth noting, was "The Hammer"), Dave Brown, and two Sutters on the ice.

They weren't whine drinkers.
Posted by The Peerless at 6:23 AM 3 comments:

Email ThisBlogThis!Share to TwitterShare to FacebookShare to Pinterest
Labels: Flyers 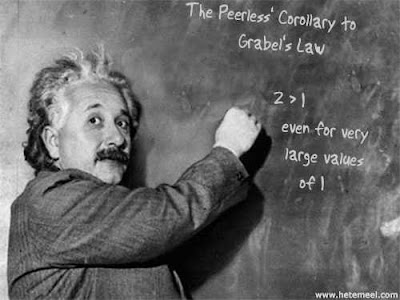 The picture says it all.

Two is greater than one, no matter how large the value of “1.” Here is what we mean by that. The Caps came out with a rush, scoring a power play goal barely two minutes into the game. You might have thought, “this is not going to go well for the Flyers.” By the end of the game, a Caps fan might have thought, “we were lucky to get the other point.” But who got the win?

We can’t really call it a “playoff” type of game in that both teams were somewhat uneven in the intensity. It was more like watching hockey’s equivalent of The Battle of the Bulge, with two teams slogging it out in the slop of the neutral zone, where most of the game was played, despite the healthy shot totals (34 for each side).

Given the health of the Flyers coming in and the fact that they were in Game Six of a six-game road trip, their strategy was rather transparent from the start – clog up the neutral zone, keep the Caps from entering the zone with any speed, and cut off cross-ice passing lanes. If they were going to win, they were going to win ugly. The result was that the Flyers hung on while the Caps – again – spent themselves trying to find the soft spots and launching shot after shot at Martin Biron (the Caps attempted 77 shots to 57 for the Flyers). Biron was more often lucky than good as a few shots slithered through, only to be stopped before the puck crossed the goal line, and the Caps played themselves out of goals by not getting good chances on net, or trying to make the last pass or hold for the perfect shooting moment, only to see the play dissolve as a product of bad ice or Flyer defenders having time to get back into the play.

- Scott Hartnell had an interesting take on the game and Alex Ovechkin’s performance…”he gets a little frustrated and starts running around, and I don’t think he’s as effective when he’s trying to kill guys or put guys through the boards.” Ovechkin had 13 shot attempts and five shots on goal, and he still managed to hit everything in sight (has Luca Sbisa scraped himself off the ice yet after playing “bug on a windshield” when Ovechkin planted him on a clean hit?).

- Mike Richards chipped in this quote…”We knew he was going to be running around a bit with, maybe, some dirty hits, but we shrugged those off.” Imagine…a Flyer…a Philadelphia Flyer, talking about a player from another team and “dirty hits.” The sun will be rising in the west tomorrow, I just know it. By the way, Ovechkin was credited with one hit. You’d think to hear some Flyers tell it that he was marauding across the frozen pond with a club in hand, pounding unsuspecting players in white jerseys.

- The NHL has a lot of trophies and awards for a lot of things. The one thing they don’t have is a trophy for the lamest excuse for a referee in the league. Chris Ciamaga would retire the trophy. We got the impression that his penalty calls were not so much for actual infractions as they were for, “well, it’s time for a penalty.” If you were paying attention, Ciamaga -- #41 in your program – made just about every penalty call.

- Every night, we look at #16 and think – “hope” might be the better word here – that he’s finally going to be rewarded for his earnest effort, but we’re starting to think Eric Fehr is Charlie Brown trying to kick that damned football. He had six shot attempts in 12:45 of ice time. In terms of ice time per shot attempt (2:08), it was roughly equivalent to Ovechkin’s results (2:10).
- Nicklas Backstrom had the goal, but also had a brutal night in the circle…four for 16 on faceoffs. All four wins were in the offensive end. The flip side of that was Mike Richards going 15 of 18 for the Flyers, including eight of nine against Backstrom. And to complete this section of the review, Boyd Gordon and David Steckel were a combined eight of 11 in the defensive end.

- Jeff Carter had eight shots on goal, tying his second highest shot output of the year. That is on the heels of 10 shots in his last game. He has no goals to show for it and missed on the last Gimmick attempt of the evening for the Flyers. He now has one goal in his last six games (on 29 shots). Slump, thy name is “Jeff.”

- How many times does it happen that the Zamboni’s have to be brought out twice to scrape the ice before a shootout? Well, tonight might have been a first. We’ll leave it at that.

For those of you scoring at home, at the half-way point the 27-11-3 is the best 41-game mark in the club’s history. The Caps have now…

In the end, Flyers fans might say, “we earned a point,” and Caps fans might say, “we escaped with a win.” Certainly in the post-game radio call-in show, you’d have thought the Caps lost this game. To their credit, the Flyers did play a whale of a defensive game under their circumstances. But remember, two is always greater than one, even for very large values of “1.”