A Caps Fans for Newbies Guide 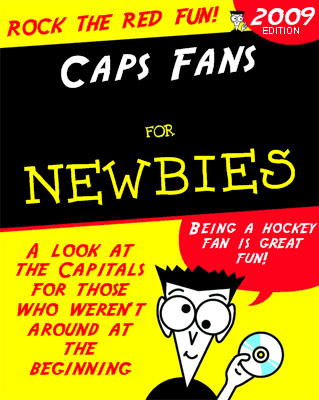 OK, so Ted wants us old fans of the Caps to roll out the welcome mat to you young whipper snappers who have discovered the joys of live hockey and embraced all things “red.”

Fair enough. We respectfully present to you newcomers the first of occasional pieces on a “Caps Fans for Newbies” guide. First, a little bit of history…

1. We hate the Penguins.

“What’s this obsession you Caps fans have with the Penguins,” you ask? OK, here’s the deal…they beat the Caps like a drum just about every time it mattered for a decade. It all started in 1991, in the first meeting of the two teams in the playoffs. After the Caps dispatched the Rangers in six games in the first round, Pittsburgh came in and applied a dose of reality to the Caps. They won in five games, then went on to win a Stanley Cup. By time the clubs had the most recent playoff meeting (in 2001), they had met in seven series over an 11-year period, and the Penguins won six of them. Twice the Penguins recovered from 3-1 deficits in games and one other time from a 2-0 deficit. They had a 26-16 record against the Caps in those seven series. And, the one year the Caps won (1994)? They got the Rangers in the next round. You might remember that as the year the Rangers won the Cup. That’s the kind of history you’re looking at here and why Caps fans are a somewhat pessimistic breed of hockey fan.

Oh, and winning the draft “lottery” in 2005 after a year long lockout that prevented a normal seeding of teams, just so they could pick Sidney Crosby (if you’re a basketball fan, think “Michael Jordan” in terms of potential) rubs Caps the wrong way, too, especially since the Caps ended up drafting 15th (they should have picked no worse than third, based on the previous year’s seeding) and picking Sasha Pokulok. You will be forgiven if you don’t recognize the name…he hasn’t yet played in an NHL game.

We older Caps fans want to thank you young folk for introducing the idea of shouting “RED!” at the appropriate moment in the singing of the National Anthem. But here is what you’re replacing…a goofy tradition that started in Baltimore, of all places. Caps fans – probably all Marylanders – would shout “O!” in the next to last line of the first verse. It started as an Oriole thing, but somehow got transplanted to the Caps. Some folks tried to rationalize it away as a tribute to former goaltender Olaf Kolzig, but that was just so much nonsense. It was just a stupid thing to do.

He left here before a lot of you discovered that professional hockey is played in the District of Columbia, but older fans say the name of “Dale Hunter” with a certain reverence. He came here in a 1987 trade with the Quebec Nordiques (no, they don’t have a team in Quebec anymore…they moved to Colorado and won Stanley Cups). He was an instant hit (literally). He was an ornery sort who had a real knack for getting under the skin of opponents. Some of the stuff he did would get him arrested if he did it outside (ask Pierre Turgeon…that’s another story). Some folks call it “dirty” play…hockey fans call it “chippy.” But Hunter had the knack. He was penalized for his antics more than all but one player ever to play in the National Hockey League. But what endears him to Caps fans more than anything is what he did in that first season with the team.

In the playoffs in 1988 – against the Philadelphia Flyers (and we’ll have more to say about them another time) – the Caps were down to the Flyers, three games to one and facing elimination. But then came back to tie the series and force a Game 7 here in DC. The Flyers got out to a 3-0 lead in that game, but the Caps came back to take a 4-3 lead. The Flyers tied it to send the game, and the series, to overtime. In overtime, the Flyers had the puck in the Caps end, but…well, we’ll just reprint the play-by-play of TV announcer Mike Fornes -- "…Murphy starts the rush… he hits Hunter… he’s in alone… a shot… and a goal!!!!!" There was Flyer goalie Ron Hextall on his back staring in disbelief into the rafters of the old Capital Centre (the arena that was in Maryland but is now a shopping plaza, I believe), and there were the Caps mugging Hunter in the corner celebrating the win. Hunter was a god after that in these parts.

No, we’re not referring to guys who repair the pipes, and for you history buffs, we’re not referring to the guys from the Watergate scandal. These were the guys who personified Caps hockey – Gaetan Duchesne, Alan Haworth, and Greg Adams. These were a “lunch pail” kind of group that played in the mid 1980’s, defending opponents all over the ice. They made the Caps a hard team to play against, even if the Caps didn’t have a lot of top-notch skill. They were the group perhaps most associated with what it meant to play “Caps hockey” back then…tough, hard-working, 100-percent effort. Duchesne and Haworth were traded together as part of the deal that brought Dale Hunter here. Unfortunately, Duchesne passed away in 2007. He was only 44 years old.

Yes, it’s a monster movie, but it was also the nickname of the best goalie of them all for this team – Olaf Kolzig. He earned the nickname because of his size (at 6’3”, 225, he was very big for a goaltender) and his volcanic temper. Whole forests have been denuded for the sake of replacing goalie sticks he’s shattered over the years in fits of anger, and he could scorch the ears of players and fans alike with the “f-bombs” he’d unleash if he gave up soft goals (puck he should have stopped) in practice or in games.

He’s been at the heart of a lot of big moments for the Caps (which well get to another time), but none bigger than his taking the Caps on his back and dragging them to a Stanley Cup final in 1998 – the only one in which the Caps have participated in their history. In the first three rounds of the playoffs that year, Kolzig won 12 of 17 games, five of them in overtime. You’ll hear talk of “goals against average” and “save percentage.” They are commonly used statistics to compare goaltenders. The first is a measure of how many goals a goaltender allows in a 60-minute game, the latter a measure of how many shots he stops compared to how many he faces. A “GAA” of below 3.00 is considered good, below 2.00 insane. In those first 17 games, Kolzig’s GAA was 1.70, and he had four shoutouts.
That he and the Caps lost to the Detroit Red Wings in the finals in a four-game sweep did nothing to tarnish his reputation. Over the years, Kolzig also was a pillar in the community, an enthusiastic supporter of a number of charitable causes. It only deepened the affection Caps fans had for him. He left under some unfortunate circumstances – one’s you’re probably familiar with if you were following the club last year – but there is no doubt he will be welcomed back as one of the greatest players – and persons – to wear a Caps jersey.

6. The Secretary of Defense

Nope, not Donald Rumsfeld (who isn’t even the holder of that job these days), but Rod Langway. There really isn’t a player today to whom you can compare him. He was big, ornery, talented, and played defense in an era given more to wild scoring contests. He also played without a helmet. He was one of a few players who was grandfathered under a new league rule mandating that players wear helmets. It only added to the image -- that and a nose broken so much that it curved like an off ramp on the Capital Beltway.

The thing about Langway… a lot of fans look at penalty minutes and equate that with a player’s toughness. If you look at Langway, he never had more than 75 minutes in penalties in any year he spent with the Caps. And this was in an era where players with more than 300 minutes wasn’t uncommon. “How is he so tough?,” you might ask. Well, no one would mess with him. Guys who did would not risk a second time. He might have been the strongest player of his era. When he checked a guy into the glass, it was like smearing a bug on a windshield. They stayed checked. But he was a good enough defenseman to have won two Norris Trophies – the top defenseman in the league – with the Caps. And, he was twice a first-team NHL all star in an era where “offensive” defensemen – not the sort of style Langway played – got all the attention. His number is in the rafters for a reason. He is probably the greatest Cap ever.

That’ll do for now. But we’ll try to give you newbies a look from time to time at what you’ve gotten yourself into in all this “Rock the Red” frenzy. You can also click on "The Passion of the Caps Fan" over in the "reference room" section in right hand margin for some more on the subject. Stay tuned.
Posted by The Peerless at 12:58 PM 7 comments:

Happy Birthday to You, Too! 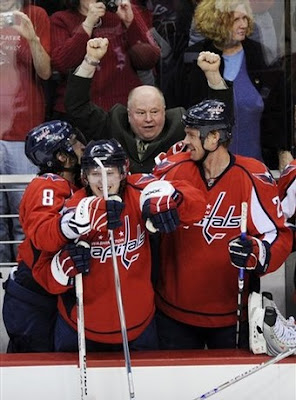 The Head Red...Bruce Boudreau, born on this date, well...some years ago. And what a collection of personalities he shares his birthday with...
- Joseph B. Strauss, chief enginneer in the building of the Golden Gate Bridge
- Chic Young, cartoonist (Blondie)
- Richard M. Nixon...you know who he was
- Rose Hovick...you might know her better as "Gypsy Rose Lee"
- Fernando Lamas...you look mah-velous
- Les Paul
- Judith Krantz
- Bart Starr
- Dick Enberg
- Bob Denver
- Jimmy Page
- Crystal Gayle
- Tyrone "Muggsy" Bogues
- Dave Matthews
- Jamie Huscroft (to give this list a hockey theme)
- Radek Bonk (for an added helping of hockey)

OK, so now the guys really have to win tonight...
Posted by The Peerless at 7:33 AM 1 comment: