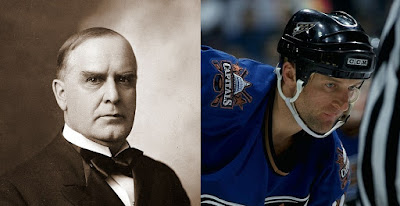 In “William McKinley and His America,” H. Wayne Morgan wrote of the 25th President of the United States:

“McKinley was a major actor in some of the most important events in American history. His decisions shaped future policies and public attitudes. He usually rises in the estimation of scholars who study his life in detail. Even those who disagree with his policies and decisions see him as an active, responsible, informed participant in charge of decision making. His dignified demeanor and subtle operations keep him somewhat remote from public perception. But he is once again at the center of events, where he started.”

Some might look at that passage and think that McKinley was, and is, an underappreciated President in American history, who accomplished more than many might realize.  It calls to mind a former Washington Capital who might be somewhat underappreciated.  People might be surprised to realize just how highly he ranks on a number of all-time lists in franchise history.  That player would be Michal Pivonka.

William McKinley’s early years leading to his entry into politics looks very similar to that of his predecessors in the latter half of the 19th Century.  Born in Ohio in 1843 as the seventh of eight children, he worked in his father’s iron foundry as a youngster before heading off to Allegheny College in Pennsylvania.  Illness and financial troubles cut short his college education, but he volunteered for the 23rd Ohio Volunteer Infantry at the start of the Civil War.  He rose through the ranks, starting as a private and mustering out as a brevet major after four years.

After the war, McKinley studied law and was admitted to the Ohio bar.  He earned support from labor when he defended a group of coal miners in a high-profile case and won an acquittal.  More than the verdict, though, he met and began a friendship with Mark Hanna, a Cleveland businessman who would be a crucial benefactor in his later political career.

That career started when he ran for, and won, a seat in the U.S. House of Representatives.  Except for a brief absence from office because of gerrymandering of his congressional district that cost him an election, he served in the House from 1877 until 1891, when he was Chairman of the powerful Ways and Means Committee and an expert on tariffs.  In 1892 he ran for Governor of Ohio and won, setting the stage for his run for President in 1896.  McKinley won the Republican Party nomination on the first ballot, and in the general election, with the assistance of Mark Hanna, who helped craft a campaign on the issues of protectionism (for) and free silver (against), McKinley defeated William Jennings Bryan by more than a million votes of almost 14 million cast.  He won in the Electoral College by a 271-176 margin.

His administration was one of tension and transition.  Shortly after assuming office he called Congress into special session for the purposes of enacting new tariffs, the result of which would be the highest and longest-lived in American history (the “Dingley Act”).  He supported territorial expansion, pursuing annexation of Puerto Rico, Hawaiii, and the Philippines.  He advocated expanded trade, especially with China, a gambit that would be related to his efforts to negotiate with Great Britain on the matter of a canal in Central America.

On the other hand, he was a committed pro-business, pro-industrial President, so much that he was caricatured as a child who was easily controlled by business interests.  He was viewed by many as too closely attached to and to much a creature of the pro-business Mark Hanna, who had managed his campaign.  There was also the Spanish-American War, a conflict between Spain and the United States that lasted three months when McKinley could not successfully achieve a resolution of differences peacefully, and war broke out over the sinking of the USS Maine in Havana Harbor, Cuba in February 1898.

Troubles did not keep McKinley from winning renomination for President by the Republicans in 1900, nor did they keep him from defeating Bryan in a rematch of the 1896 election by the largest margin for a Republican candidate since Ulysses S. Grant won office in 1872.  However, six months after his inauguration for a second term as President, was greeting the public at the Temple of Music in Buffalo, New York, when he was shot twice by Leon Czolgosz, a former steelworker and an advocate of anarchism.  McKinley lived for eight days after the shooting before succumbing to gangrene on September 14, 1901.

Michal Pivonka came to the Washington Capitals long before the NHL was the melting pot of international players fans see today.  The native of Kladno, Czechoslovakia, was selected by the Caps in the third round of the 1984 Entry Draft, but getting him to North America proved much more difficult.  It took more than two years, involved meetings in eight countries (starting at a hunting lodge in northern Sweden), and had enough intrigue to provide a story line for a spy novel, but Pivonka defected from Czechoslovakia and landed in the United States with his wife on July 18, 1986.  It would be another four days before the team introduced Pivonka to the press, and another two months before he would finally don a Capitals sweater.

Based on his rookie season, it was worth the wait for Pivonka.  He finished sixth among rookies in goals (18) and seventh in points (43) in 73 games.  He added another goal and an assist in the seven-game postseason series against the New York Islanders.  It was the start of a 13-year career for Pivonka.  By the time it was over, he appeared in 825 games, at the time the third-most in team history, behind only Dale Hunter (872) and Kelly Miller (940).  His 181 goals was, at the time, tied with Hunter for eighth in team history.  He was second only to Gartner in total points in franchise history, 599 to Gartner’s 789.  He was, at the time of his retirement, the club leader in assists (418).

However, there were bumps along the way, most notably a contract dispute in the summer of 1995.  At the conclusion of the 1994-1995 season, he and Peter Bondra were restricted free agents, eligible to sign offer sheets with any team presenting one (the Caps would have had the right to match the offer).  Neither player received an offer, but that did little to break the impasse between the club and the players.  Each reported to training camp, but neither played in any preseason games in advance of the 1995-1996 season.  When a contract could not be agreed upon for either player, both headed west to join the Detroit Vipers of the International Hockey League.  Pivonka and Bondra each played in seven games with the Vipers (Pivonka went 1-9-10, Bondra went 8-1-9) before finally agreeing to terms with the club in late October.

Pivonka went on to have his most productive season as a Capital after signing the new contract, finishing 16-65-81, plus-18, in 73 games, the 65 assists then being the second-most in a season in team history (Dennis Maruk had 76 assists on his way to a 136-point season in 1981-1982).  It would be the high point of his regular season production, though.  The following season he sustained a knee injury in late October (and would be the seventh player to land on the injured reserve list by that point in the season ) that limited him to 54 games.  In 1997-1998 he appeared in only 33 games, going 3-6-9, and did not score a goal in 13 games of the Caps’ playoff run to the Stanley Cup final.  By 1998-1999, despite the fact that he was just 33 years old, injuries had taken their toll.  He played only 36 games and went 5-6-11, failing to score a goal in his last 16 games and recording only two assists in that span.  The 46 games he missed was part of a ledger that recorded a franchise record 510 man-games lost to injury that season.  It would be the last NHL season of Pivonka’s career. He did play one more season in the IHL, appearing in 52 games for the Kansas City Blades, before ending his hockey career at the end of the 1999-2000 season.

William McKinley was a President that went unappreciated in his time and was treated indifferently by historians after his death.  He was thought to be less a “manager” and more a “managed” chief executive.  With the passage of time, his reputation has improved, historians acknowledging that the scope of his activity merits reconsideration – a President who tried to avoid war, who was an effective advocate for expansionist foreign policy, who led the country into a greater leadership role in a global economy.  He was, some argue, the first “modern president,” with his use of the telephone and media as essential tools of his administration and political apparatus.  His lack of personal charisma might have been a factor in his being judged harshly in his time, but time has provided perspective on his accomplishments and his flaws.

Michal Pivonka endured a challenging and dangerous journey to play hockey in North America.  Having to perform at the highest level while confronting cultural and language obstacles on the way speak to a singular determination, even if he was not a demonstrative personality on or off the ice.  With the passage of time, his production stands out on closer examination.  He is sixth in Capitals history in games played (825), tied for tenth in franchise history (with Dale Hunter) in goals (181), third in assists (418), fifth in points (599), seventh in power play goals (56), fifth in shorthanded goals (12).  He and Alex Ovechkin are the only players in franchise history to have played in at least ten NHL seasons and spent their entire NHL careers in the Capitals organization.

It is in their similarities of being underappreciated in their time but looking more impressive in their accomplishments as the years go by that place William McKinley and Michal Pivonka next to one another in this look back at Presidents and Capitals.

Posted by The Peerless at 7:02 AM No comments: