“It is better to conquer yourself than to win a thousand battles. Then the victory is yours. It cannot be taken from you, not by angels or by demons, heaven or hell.”
-- Buddha

Since coming into the league, Alex Ovechkin has 658 goals in his career.  Leave aside for the moment whether that is the best all-time when adjusted for era.  Look at the era in which he plays.  As it is, he could have sat out the last four seasons in their entirety and still had 475 goals, a 29-goal lead on the second-leading goal scorer over the last 14 seasons (Sidney Crosby: 446).

His ability to build that sort of dominance over the field of more than a thousand skaters to dress for NHL games since 2005-2006 is due in no small part to his ability to sustain a high level of performance.  It is in that context that his 51-goal season in 2018-2019 is amazing.  It was his eighth 50-goal season, putting him behind only Mike Bossy and Wayne Gretzky in career 50-goal seasons (nine apiece).  His 51 goals included three hat tricks, tied for the league lead (with Patrik Laine and David Pastrnak).  It was the fourth time in his career he recorded at least three hat tricks in a single season and tied him with Jari Kurri for tenth place all-time in career hat tricks (23).

Ovechkin added to his all-time record in another goal scoring area as well.  He had 18 power play goals this season, making it seven consecutive seasons with at least 15 power play goals and an all-time most 11 such seasons in his career overall.   He finished the season with 247 career power play goals, tied with Luc Robitaille for fourth place on the all-time list.

And it was not as if Ovechkin padded his numbers as an inconsequential matter.  The Caps were 26-8-2 in games in which he recorded a goal, 13-2-1 in games in which he posted a power play goal.  In the skater's fundamental measure of individual success, scoring goals, Ovechkin stands alone. 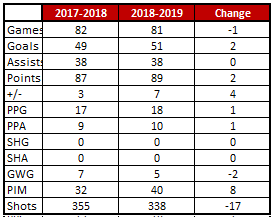 Cheerless’ Take… Was there the faintest hint of a crack in Ovechkin’s decade-plus record of production?  He started the season with 29 goals in his first 32 games, and had folks talking about another 60-goal season and putting Wayne Gretzky’s all-time career goal scoring mark in play.   However, he had 22 goals over his last 49 games, a respectable 15th overall in goals scored over that span, but tied with the likes of Cam Atkinson and Connor McDavid, fine players but not of the goal scoring elite Ovechkin represents, is not how one might have expected Ovechkin to finish the season.  Perhaps it was the amount of games and ice time he logged going back to last season, but when next season comes around as he turns 34 years old, one has to wonder if it is not getting to be too much.

Bonus Odd Ovechkin Fact… Ovechkin was nothing if not a road warrior.  Of his 51 goals this season, 32 came on the road, tops in the league and nine more than four players tied for second place).  It gave Ovechkin a total of 330 goals scored in road games over his career, eighth-most all-time.

In the catalogue of games over the career of Alex Ovechkin, a mid-week game against in February against a team with which the Caps do not have a particularly intense rivalry might not seem particularly memorable. What made it less noteworthy was that the opponent that evening, the Vancouver Canucks, were bouncing around the .500 mark in a season in which they would not reach the playoffs, the fourth straight year they would miss the postseason.

So, when the Caps opened the scoring three minutes into the game, it was not surprising and, under other circumstances, not a moment to take special note of.  But a moment it was.  The scoring play started with hard work by T.J. Oshie, who hounded Chris Tanev into giving up the puck inside his own blue line.  Ovechkin grabbed it and skated past Erik Gudbranson and around the back of the Vancouver net.  Coming out the other side, Ovechkin fed the puck under Gudbranson’s stick to Nicklas Backstrom closing down the middle.  Backstrom fired the puck low off goalie Jacob Markstrom’s left pad, and Oshie was there to follow up on the rebound and deposit it into the back of the net.

The secondary assist for Ovechkin gave him 1,180 career points, passing Sergei Fedorov as the leading overall Russian-born scorer in NHL history.  It might be worth noting that Fedorov’s last NHL point was scored as a Capital, assisting on a third period power play goal by Alexander Semin that tied a game with the Florida Panthers on April 11, 2009 (the Panthers went on to win that game, 7-4).  Ovechkin was on ice for that point.

Almost as much as his goal scoring over his career, the durability of Alex Ovechkin has been impressive.  Going into this season he played in every scheduled game five times in 13 seasons, and only once – in 2009-2010 – did he miss more than four games in a season (he missed ten).  This season, he dressed for all 50 games on the calendar leading up to the All-Star Game break, making it 1,053 appearances in a possible 1,082 regular season games in his career.  However, even though the fans voted Ovechkin as the Metropolitan Division captain for the All-Star Game weekend in San Jose in late January, Ovechkin chose to decline his selection to play and captain the Metro for the All-Star Game, preferring to recharge for the regular season stretch run.  Under league rules, Ovechkin would have to sit under suspension for either the game immediately prior to or following the All-Star Game.

Ovechkin chose to sit for the first game back after the break, the Caps hosting the Calgary Flames.   Washington came out of the break and into that game on a seven-game losing streak (0-5-2), their longest of the season.  However, the Caps rose to the occasion, largely on the efforts of the unsung.  Nic Dowd scored three minutes into the contest.  After the Flames tied it late in the first period, Dmitrij Jaskin scored with less than 30 seconds left in the frame to give the Caps a lead going to the first intermission.  The Caps added to their lead on a Tom Wilson goal in the first minute of the second period, but the Flames replied less than two minutes later to get back within a goal.  Calgary tied the game mid-way through the third period, leaving it up to Evgeny Kuznetsov to settle things in the Caps’ favor in the last minute of regulation on a power play goal, providing the final 4-3 margin.  The Caps did well with Ovechkin out, four different players recording goals and 11 different players recording points. For his part, Ovechkin after the break and one-game suspension finished the season 14-18-32 in 31 games as the Caps went 20-9-2, the fifth-best record in the league over that span.

Postseason…  It would be hard to assign blame for the Caps’ first round exit to the effort of Alex Ovechkin.  When the Caps were eliminated in Game 7 against Carolina, Ovechkin was tied for third place in overall scoring, his nine points representing almost half of the Caps’ goal output for the series (20).  He was on ice for 13 of the 20 goals scored by the Caps and nine against (six goals for on the power play left him minus-2 for the series).  His home-road splits reflected the problems his teammates had more than his own.  His four goals scored were split evenly at home and on the road, but he did not record an assist on the road while posting five on home ice.

Looking ahead… Betting on Alex Ovechkin to go into decline has become a fool’s errand.  Players having passed their 30th birthdays are supposed to be looking back on their best years, not posting them.  But Ovechkin is fourth in NHL history in goals scored in his 30 year old through 33 year old seasons and has more goals over that four-year span than any player in more than 30 years.  But now, we are getting to the end of this phase of Ovechkin’s career in an important respect.  He has two more years on his current contract that carries a $9.538 million annual cap hit.  Seven skaters in the league have higher cap hits, but only Corey Perry among the top 12 skaters in cap hits is older (by four months).

Caps General Manager Brian MacLellan has said, with respect to Ovechkin and his long-time teammate Nicklas Backstrom, that “We’re going to be sentimental with Ovi and Nicky for sure…because they’ve been here forever and they’ve done what they’ve done. I think you have to be. They’ve defined this franchise. You can’t be that cold.”  It defies imagination to conceive of Ovechkin in another sweater at this point in his career, but nothing in the NHL is certain.  Wayne Gretzky played for four teams in his NHL career.  It makes one appreciate and want to hold dear the time Ovechkin has spent with this franchise and what years he has remaining.

Perhaps more than any player of this era, including Sidney Crosby, Alex Ovechkin has been at once the face of and a fixture with the Washington Capitals.  No player has appeared in more games as a Capital than Ovechkin (1,084, fourth in games played since he entered the league in 2005-2006), and only Calle Johansson played more seasons with the club (15).  That he has done so at such a high level of production and with so few and infrequent absences from the lineup is testimony to the imprint he has on this franchise that few players of this or any era can match, let alone surpass.  It is that combination of durability and production that puts him in a class of legendary players with long tenures and who are closely associated with a team such as Gordie Howe, who skated for 25 years with the Detroit Red Wings, or Maurice Richard, who skated for 18 seasons with the Montreal Canadiens.

It would be a betting certainty that Ovechkin will not play hockey, at least not in North America, until the ripe age of 51, as Howe did.  Even playing to the age of 40 is a matter of uncertainty.  But in the here and now, the Alex Ovechkin that Caps fans are seeing is grayer and a bit less rambunctious than he was 10 years ago, but he is every bit the productive player he was then.  Even better, having realized a Stanley Cup championship, continuing to climb the all-time lists in so many statistical categories, and perhaps putting himself in the unique place of challenging for the previously thought impossible to pass record of career goals, he is past the criticism and the complaints set upon him by media and fans in his early career, and appears now to be the pure essence of a player at peace with himself and his game.