The Peerless Prognosticator is ON THE AIR!!! -- Game 47: Flyers at Capitals, January 27th

The Washington Capitals return to the ice (we hope) on Wednesday night for the first time since January 19th as the Philadelphia Flyers come to town in a nationally-televised affair at Verizon Center.

Their opponents, the Flyers, have had their own interruption in play, a game against the New York Islanders scheduled for last Saturday that was postponed, but otherwise the Flyers have struggled recently.  After putting together a four-game winning streak earlier this month, tying their longest of the season, the Flyers are 1-3-1 in their last five games, their lone win coming at Detroit in a Gimmick against the Red Wings.  The odd part of that five-game run for the Flyers is that all five games were one-goal decisions.

Over those last five games, the Flyers have had the same problem that has plagued them all season – scoring goals.  They have just ten in those five games, entirely consistent with their 29th-place ranking in scoring offense (2.24 goals/game).

In the “what have you done for us lately” file, there aren’t many Flyer skaters.  Only six Flyers have goals over their last five games, led by Wayne Simmonds with three.  The three goals lifted Simmonds into a tie for the team lead in goals with Claude Giroux and lifted him a bit out of the mini-slump in which he found himself.  He has four goals in his last six games after recording just three in his previous 14 contests.  Simmonds has been a remarkably consistent performer in his four-and-a-half seasons since arriving in Philadelphia from the Los Angeles Kings.  His goals-per-game have clustered between 0.30 (this season so far) and 0.37 (last season); his points have clustered between 0.60 (in 2011-2012, his first in Philadelphia) and 0.73 (in 2013-2014).  His shots per game range from 2.40 per game (in 2011-2012) to 2.55 (in 2013-2014).  And, he has missed only ten games in his Flyer career.  Simmonds is 5-6-11, plus-1, in 21 career games against the Capitals.

Claude Giroux is the player with whom Simmonds is tied in goals for the Flyers, and he has two tallies in the Flyers’ 1-3-1 slide.  For Giroux, it is part of a longer productive run in which he is 2-6-8, plus-2, over his last eight games.  Giroux has been another consistent player in his own right.  Starting in 2011-2012, when he set career hights in goals (28, since equaled), assists (65), and points (93), he has been a point-per-game player (108-229-337 in 334 games).  He is also making his way up the Flyers’ all-time lists.  A hat trick against the Caps (perish the thought) would place him in a tie for 16th in all-time goals for the Flyers (Dave Poulin: 161).  His next power play goal would tie Scott Hartnell for 13th in franchise history (57); his next shorthanded goal would lift him into the top-20 in Flyers’ history (he has five career shorthanded goals).  He is within 13 points of 500 and would become the 14th player in Flyer history to reach that mark.  In 26 career games against the Caps, Giroux is 15-13-28, plus-2.

In goal, the Flyers might be a bit thin.  Michal Neuvirth was reported to be “limping badly” after the Flyers’ 3-2 loss to the Boston Bruins on Monday night.  That will put the role of backup into question, but it would seem that Neuvirth injury or not, Steve Mason would get the call in this game (unless he doesn't).  Mason’ overall statistics this season are hardly those for the scrapbook.  Of 41 goalies having logged at least 1,000 minutes this season, Mason is 33rd in goals-against average (2.72) and 26th in save percentage (.914).  He appeared to be piecing together a good stretch of appearances, but looking at his last five outings his save percentage has steadily deteriorated.  He started with a 20-save shutout of the New York Islanders on January 9th, then saw that save percentage slide to .938, .935, .914, and finally .911 (albeit having faced 45 shots) in a 4-3 loss to the Pittsburgh Penguins last Thursday.  Against the Caps, Mason is 7-4-2, 2.83, .904, with two shutouts in 14 career appearances.  There was some mystery on Tuesday about his availability, though (and Neuvirth’s for that matter)... 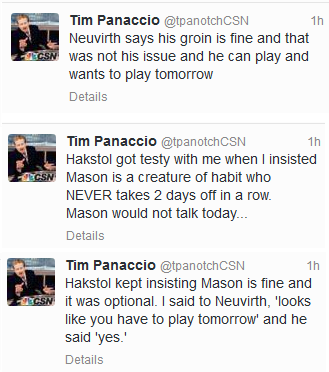 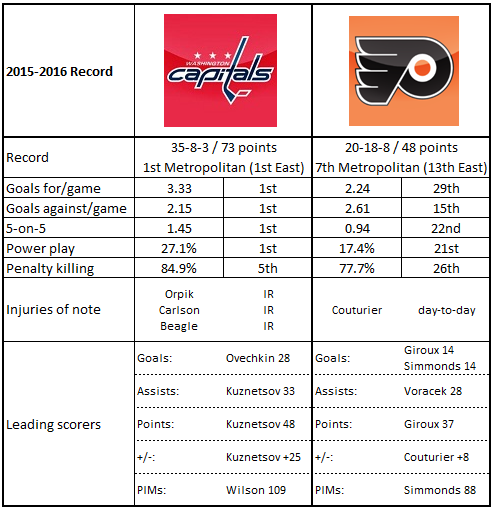 4.  As you might expect, the Flyers do not work or play well with others.  They rank second in the league in penalty minutes per game (12:24), and they rank third in fighting majors (21), behind Anaheim and Columbus (each with 27).  Twelve different Flyers have recorded fighting majors this season, led by Wayne Simmonds with four.

4.  The Caps have the league’s best home power play (30.9 percent), but they also have the fewest power play chances on home ice (68).

5.  The Caps will be looking to improve a home ice statistic in this game.  Over their last four games at Verizon Center they have a Corsi-for percentage of 54.7 overall and 56.9 in close score situations (numbers from war-on-ice.com).

Rookie defenseman Shayne Gostisbehere packs a lot of offensive punch in a small frame.  At 5’11”, 160 pounds, he is among the smaller defensemen in the league, but he has eight goals and 12 assists for 20 points in 28 games this season (both numbers lead all rookie defensemen).  It was not as if a lot of people saw this coming.  Gostisbehere was not listed on the 2012 amateur rankings of North American skaters by Central Scouting, and he managed to climb to just 148th place in the final rankings.  He was taken by the Flyers with the 78th overall pick in the 2012 entry draft, the 26th defenseman taken in that draft.  He is one of just 24 defensemen in that draft to have appeared in an NHL game so far, and he ranks 16th on that list in career games played.  He ranks eighth on the list in goals and ninth in points.  Gostisbehere comes into this game riding a three-game points streak and will be making his first appearance against the Capitals.

Alex Ovechkin is on a pace to finish the season with 50 goals, a total that would earn him his  sixth Maurice Richard Trophy, if his closest competitors maintain their respective current paces.  That is not unusual; it would be his seventh 50-goal season and his fourth straight Richard Trophy.  The unusual part of his season is the power play, specifically assists. Through 45 games Ovechkin has just three assists on the power play, putting him on a pace to finish the season with just five.  It would be a career low in that statistic, wiping out the nine-assist season he had last year.  He has gone his last 15 games without recording a power play assist.  True, the power play does not go “through” him as much as is does go “to” him as its finisher, but the low assist total is unusual even by his standards.  Ovechkin is 29-17-46, minus-3, in 38 career games against the Flyers.

Philly does not score much, and they appear to have health issues in goal.  These are not what one considers features in a winning formula against a team like the Caps that can score and prevent scoring with equal skill.  Nevertheless, this is always an entertaining contest that hearkens back to the knock-down, drag-out wars of the 1980’s between these clubs.  The Caps dominated the Flyers in the first (and so far only) meeting of the clubs this season, converting two of three power plays and holding the Flyers to 20 shots on their way to a 5-2 win in Philadelphia back in November.  There is little that has happened since to suggest that the gap between these teams has narrowed.