Washington Capitals: That Was The Week That Was -- Week 24

The Washington Capitals swept three games in Week 24, each of the games presenting their own challenges.  In winning the week, the Caps returned to a pattern that was missing in recent weeks.  They won for a second straight week, the first time they put together consecutive winning weeks since Weeks 17 and 18.  Let’s look at how they did it. 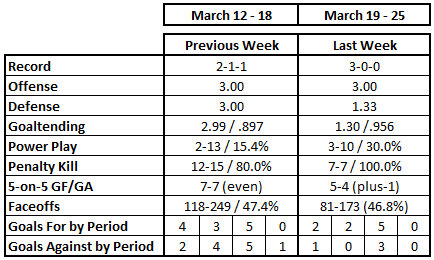 Three home games, three wins.  In accomplishing that feat, the Caps set a franchise record for home wins in a season.  When they beat the Arizona Coyotes, 4-1, on Saturday night, it was their 31st home win of the season.  That snapped a tie with the 1985-1986 and 2009-2010 clubs that had 30 home wins apiece.  It also happened to be their seventh perfect week of the season.

It was by no means an easy week to navigate.  Their first opponent for the week – the Calgary Flames – came to Verizon Center with a 12-1-0 record in the 13 games leading up to that contest.  The Columbus Blue Jackets were the team nipping at the Caps’ heels in the standings for weeks, a team that had a franchise record 47 wins and 100 points when they arrived in Washington.  The Arizona Coyotes were the club with nothing at stake and nothing to lose.  This Caps team finished the week as the fifth-winningest team in club history, their 49th win to end the week breaking a tie with the 2010-2011 Caps (48-23-11) and the 1983-1984 Caps (48-27-5).  The two points they earned against the Blue Jackets  in the middle game of the week broke their tie with the 1999-2000 team that finished with 102 points. 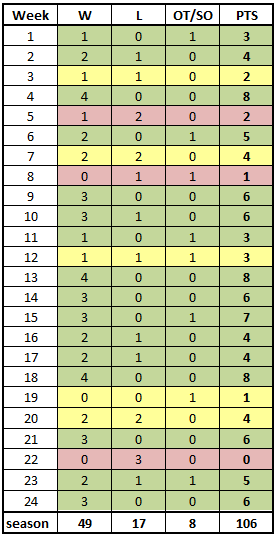 Even slipping a bit relative to their season average, the Caps finished the week with only the Pittsburgh Penguins averaging more goals per game than Washington.  They did it in different ways.  Against Calgary, the Caps beat a goaltender – Brian Elliott – who won 11 straight decisions and had not lost a game in regulation time in more than a month.  In beating Sergei Bobrovsky and the Columbus Blue Jackets, it came down to T.J. Oshie reprising his role as trick shot artist extraordinaire from his Sochi Olympics days.  Then, the Caps overcame their frustration in dominating the Arizona Coyotes in shot attempts, but finding themselves unable to solve goalie Mike Smith but once until late in the Saturday game.

Individually, seven players shared the nine goals, Alex Ovechkin and Daniel Winnik each getting a pair.  For Ovechkin, the two goals allowed him to finish the week with 30 goals for the 12th consecutive season, one of three players (Mike Gartner and Wayne Gretzky being the others) to start their careers with 12 consecutive seasons with at least 30 goals.  For Winnik, it was the second time this season and third as a Capital that he had a two-goal game (his first of the game being the game-winner), that coming against the Coyotes to end the week.  He scored his goals three minutes apart late in the third period, the shortest amount of time to score two goals in any of the six games he did it in his career.

Twelve different players recorded points with Nicklas Backstrom (1-3-4) and Kevin Shattenkirk (0-4-4) leading the way.  Brooks Orpik had an assist to break an eight-game streak without a point.  T.J. Oshie’s goal against Calgary in the first game of the week made it 30 on the season, the first time in his career he reached the 30-goal mark.  Among players appearing in 30 or more games this season, Oshie is seventh in goals per game (0.49).  Jay Beagle had an assist in the third win of the week, against the Coyotes.  In 82 career games in which Beagle recorded a point for the Caps, the team’s record is 67-8-7, and they are 31-2-5 in the 38 games he recorded a point on home ice.

The Caps faced the good, the bad, and the “meh” in terms of opponents’ offenses for the week.  Calgary is a middle of the road team (ended the week 16th in scoring offense), Columbus is a very good offensive team (fifth), while Arizona is challenged in the offensive end (27th).  Still, holding three opponents to a total of four goals speaks to good defense from the net out.  The skaters limited chances for opponents, finishing the week by allowing just 51.52 shot attempts per 60 5-on-5 minutes, fewer than their fifth-ranked figure for the season (53.24; numbers from Corsica.hockey).

It was a case of the Caps taking advantage of possession-challenged teams, Calgary ranking 19th at week’s end in Corsi-for at 5-on-5 on the road, Columbus ranking 21st, and Arizona ranking last in Corsi-for on the road.  For the week, the Caps won the 5-on-5 battle with a 59.60 Corsi-for percentage at fives and a shots for share of 59.15 percent (numbers from Corsica.hockey), largely by limiting opponents’ opportunities to generate any offense.

Braden Holtby got all the minutes in Week 24, and he was more than up to the task.  He stopped 86 of 90 shots over the three games and by the end of the week was second among all goalies in wins (39, Sergei Bobrovsky has 40), third in goals against average (2.01, behind Jimmy Howard and Bobrovsky), seventh in save percentage (.927), and first in shutouts (eight).  By period, he was excellent in the first periods of games (25-for-26/.962), sublime in the second period (23-for-23/1.000), and very good in the third (35-for-38/.921).  He also stopped all three shots he saw in overtime against Columbus and denied the Blue Jackets on all three shot attempts he faced in the Gimmick.  When he beat Columbus in the middle game of the week, it extended an amazing streak.  He has not lost in regulation to an Eastern Conference team in the 2017 portion of the season, not since dropping a 4-3 decision to the New York Islanders on December 27th.  Since then, Holtby is 17-0-2, 1.63, .939, with four shutouts against Eastern Conference teams.

It was a good, solid week on the power play for the Caps.  The were 2-for-3 against the Calgary Flames, the first time the Caps recorded two power play goals in a game in six weeks, since doing it in a 5-0 win over the Carolina Hurricanes on February 7th.  When they went 1-for-4 against Arizona to end the week, it was the first time since Week 18 that they had a week of 30 percent or better on the power play. 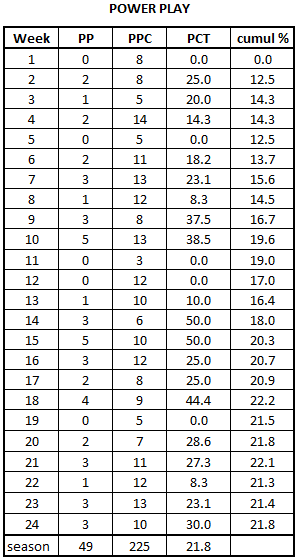 Few chances, no goals.  That’s the way you draw it up.  When the Caps allowed the Flames a single power play chance, it was the third straight game that Washington limited an opponent to a single power play chance.  As it was, the seven shorthanded situations faced were the fewest faced by the Caps in 19 weeks with three or more games played this season.  It was the second time in four weeks and the fifth time this season that the Caps killed all the shorthanded situations they faced in a week.   It was also an efficient penalty kill, allowing only ten shots on goal in 14:00 of shorthanded ice time.  It was a particularly efficient penalty kill against Columbus, who managed a single shot on goal in four power play minutes. 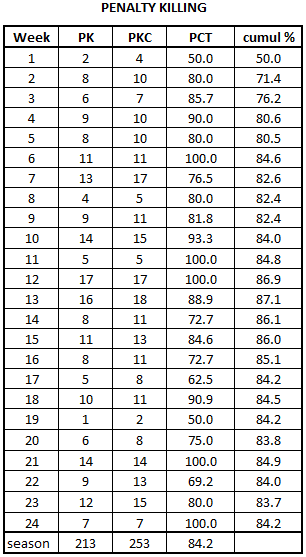 It was not a good week in the faceoff circle for the Caps.  They were below 50 percent in all three games and under 50 percent in both the offensive and defensive zones for the week.  It was not as if they were facing the best of the best in that particular skill, either.  None of the three teams they faced outranked them in the team faceoff rankings.

Individually, it was a good week for Jay Beagle, who outperformed his already highly-ranked faceoff winning percentage, winning 61.8 percent of his draws to finish the week ranked seventh among 145 skaters taking at least 250 draws this season (57.1 percent).  Evgeny Kuznetsov took the most draws this week (42) but won only 13 (31.0 percent).  He finished the week ranked 135th among that same group of 145 skatrers with 43.2 percent.  T.J. Oshie was the other Caps taking more than ten draws finishing over 50 percent (7-for-143/53.8 percent), while Lars Eller finished under 50 percent in that group for the Caps (16-for-34/47.2 percent). 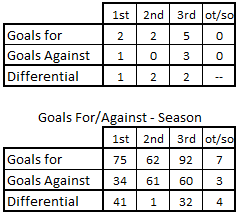 The week had a certain common quality about it.  Slow starts and busy finishes.  Only three goals were scored in first periods for the week (two by the Caps, against Calgary and Arizona), while the Caps and their opponents combined for eight of the 13 total goals for the week in the third period, the Caps holding a 5-3 edge.  The Caps did maintain a positive goal differential in each period for the week.  It allowed the Caps to finish the week with the best goal differential in first periods this season (plus-41 to plus-32 for Columbus) and finish in a tie with Pittsburgh for the best goal differential in third periods (plus-32).  Washington finished the week as one of four teams with positive goal differentials in all three regulation periods and overtime (Columbus, the New York Rangers, and the Edmonton Oilers are the others).

It was a good week.  Any week with three wins in three tries qualifies.  The Caps had superior possession numbers, but their offense did not track cleanly with that level of dominance, especially given they held a slim 5-4 edge in 5-on-5 goals despite a Corsi-for north of 55 percent.  But looking at the particulars, there were those dominant underlying numbers at 5-on-5, there were the good special teams results, there was the excellent goaltending from Braden Holtby, there was the find secondary scoring from the likes of Daniel Winnik, and there was the record-setting home win on Saturday.  There was not a lot not to like for Week 24.

The three game sweep at home for the week was an especially welcome result, given that the Caps now embark on a five-game road trip over eight days, taking them through three time zones.  It might be just the sort of change in routine that the Caps need to keep their focus fresh as they head into the last few games of the regular season.