Development Camp -- We Got Scrimmage!

OK… how do you know that the Caps are a successful franchise at this point in their history? If you said, “because they sold a couple thousand tickets for a convention”…

The answer lies in what happened at 3:30 this afternoon in Arlington, Virginia. A standing room only crowd packed into Kettler Capitals Iceplex to watch a few dozen kids, most of whom they couldn’t pick out of a lineup with a program, and watched them put on a quite entertaining show…

… on a weekday afternoon…

… in the middle of summer.

As for the scrimmage, the Aardvarks (Group “A,” but we prefer to give them a name) faced off in white against the Banshees (Group “B”) in blue. As one might expect, there wasn’t much in the way of tic-tac-toe hockey or sweet feeds for tap-ins, but it wasn’t for a lack of trying. Despite the somewhat odd format (20 minutes, 10 minutes, intermission, 20 minutes, 10 minutes), the guys skated hard and got their noses dirty.

Trevor Bruess got the show started in the first, uh… period… for the Aardvarks when he carried the puck down the right side. With a teammate on his left occupying the defense, Bruess held the puck and waited for Banshee goalie Dustin Carlson to commit. Bruess snuck the puck through an opening (although we suspect Carlson might want to have that opportunity over again). Bruess would also make his presence known with some fine work along the boards in that first frame.

Michael Dubuc staked the Aardvarks to a 2-0 lead when he worked his way in deep and roofed the puck over Carlson, just under the crossbar. Dubuc was another of the youngsters who was contributing in ways other than just getting the puck on net, although he would have a number of other scoring chances in this scrimmage.

Sean Backman put the Aardvarks up 3-0 in the second frame with a shot from the top of the faceoff circle that beat Carlson low on the far side. At that point, it looked like a rout was unfolding.

But the Banshees got back in it when Dmitri Kugryshev banged a slapper in from the right wing circle that rang the iron on the far side.

Bruess almost got that one back for the Aardvarks with a nifty curl and drag that open for a moment, but he could not convert from in close.

The Banshees made the Aardvarks pay as John Carlson pounced on a rebound from low in the left wing circle to get the men in blue back to within one at 3-2. Dan Dunn, who made a fine save on the initial shot, just wasn’t able to recover in time as Carlson left no doubt.

The teams traded runs up and down the ice for most of the remaining time until Dubuc scored into an empty net to make it 4-2. Greg Burke finished the scoring moments later with a goal that left Garrett Zemlak staring into the rafters wondering how he let the puck get through (edit...it appears Dubuc got that one to complete the hat trick... chalk it up to being at the other end of the ice.

That covers the scoring, but it wasn’t the only entertainment. Brett Flemming, the Caps’ fifth round pick in June’s entry draft, had a pretty good first half of the contest. He also seems to us to bear more than a casual resemblance to former Cap Richard Zednik (although Flemming is a defenseman).

Stefan Della Rovere displayed some of the style that will endear him to Caps fans should he skate on the Verizon Center surface in years to come. He wasn’t shy about using his body, connecting on a number of hits, including a couple on Joe Finley that were impressive. Finley had a somewhat difficult game. He was whistled for a penalty 16 seconds into the game (tripping) and was the culprit in the only other penalty called (high-sticking).

Dmitry Orlov – a second round pick in the June draft – also had a fine day, although he didn’t show up in the score sheet. He showed some talent for playing larger than it says in the program (6’0”, 197), planting a couple of hits of his own, including a nice open ice hip check.

It was interesting to see Francois Bouchard and Anton Gustafsson paired on one line for the Banshees. Unfortunately, no chemistry seemed to ensue.

Here are some pics of the action… 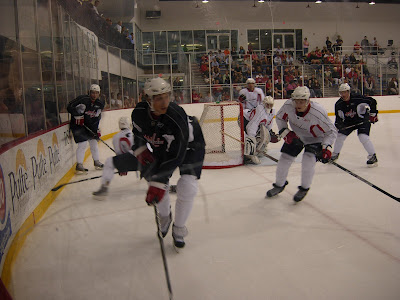 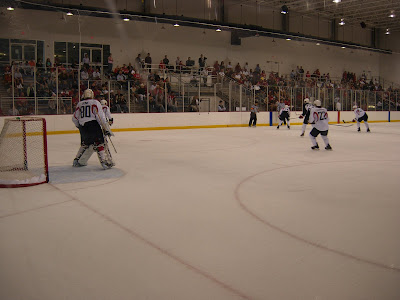 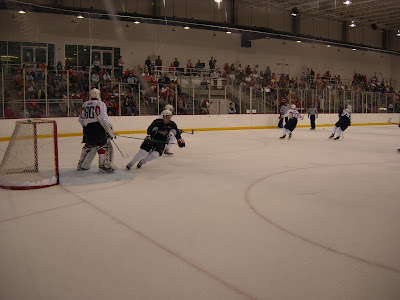 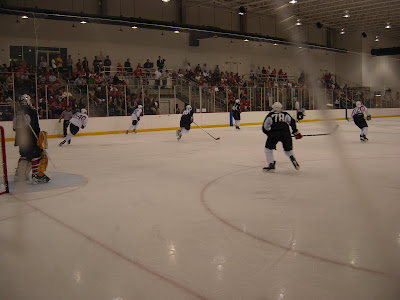 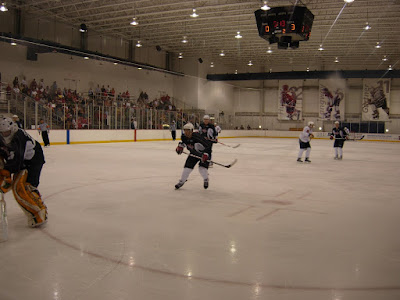 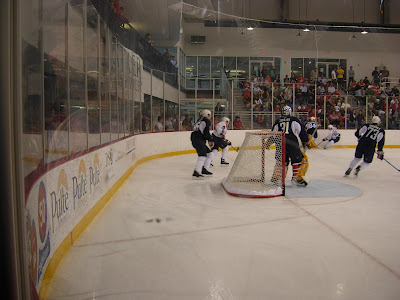 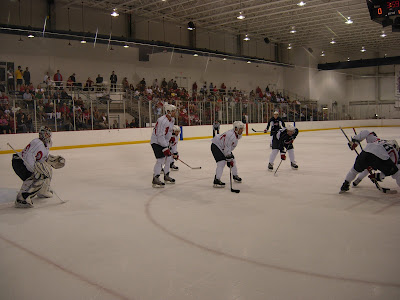 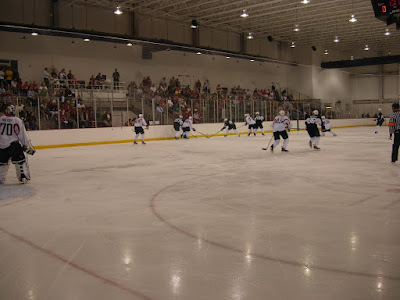 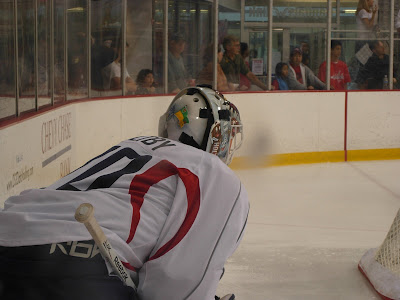 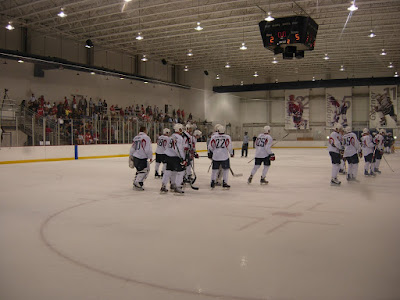 Posted by The Peerless at 7:57 PM No comments:

Day Three -- What's With the Toys?

No drills (at least with pucks), no scrimmages, no bench coaches...

Some might have found this morning's skating trials a bit dry (ok..boring). Not us. We were fascinated. Groups A and B didn't spend a lot of time on the ice (about an hour apiece), but it was chock full of fun... if you like toys and skating.

There were a variety of styles on display -- choppy strides, fluid ones, the upright skater, the low-slung stealth guys -- but what we were noticing was the sound. The guys who were laboring really made a racket, their skates digging hard into the ice. Then there were those who made little sound at all, which struck us as a good deal more efficient.

Since we're dealing in tenths, if not hundreths of seconds of difference among skaters, it was hard to eyeball who was winning these drills, but there were some things that were expected (like Mathieu Perreault being quick as can be and very good in the obstacle run) and some things that weren't (like Joe Finley being quite nimble, even in the turns).

There were a couple of blown tires along the way -- Everett Sheen got a good-natured stick banging on the ice for his effort -- and a few do-overs, either because of stumbles or temperamental equipment. Speaking of which, the days of stop watches are gone (forgive us, we once used slide rules to do calculations). It's all digital and optical now with gizmos on tripods and receivers and all that.

For purposes of the drills, the guys were asked to line up alphabetically. We were wondering if anyone would screw this up (like the Russians, if they forgot for a moment that this was the English alphabet we were talking about... they didn't).

Oh, and don't think it escaped our attention that after one run, Perreault did his "gold medal finish/stick the landing" stop with a spray of ice after one run...

Here are a couple of pics (we apologize for getting that netting in such sharp focus)... 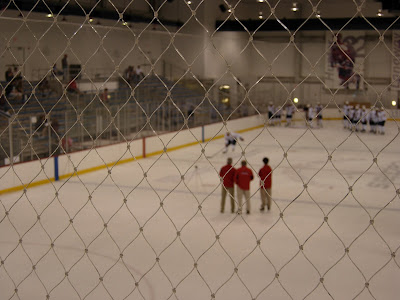 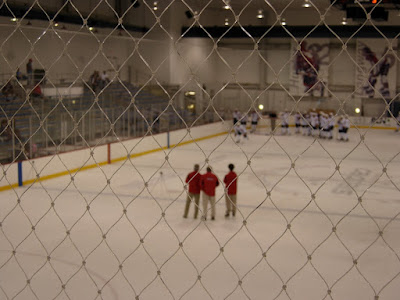 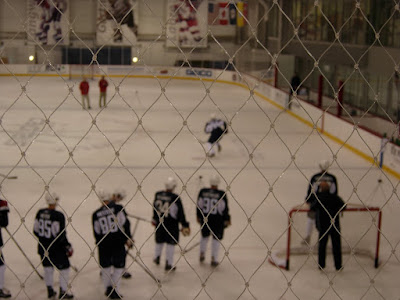 Good morning, Mr. Peerless. Your mission, should you choose to accept it, involves the clandestine observation of hockey prospects gathering in Arlington, Virginia, and the reporting of same to your superiors. The Washington Capitals are taking extraordinary measures to ensure that certain of their prospects are not identified by name. Consider this exchange between a Capitals operative and a representative of the Capitals community that was intercepted on Tuesday (names have been redacted in the interest of security)... 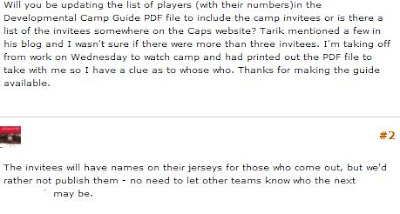 Although the details will be left to you on mission complement, it is not advised that you select any team members for this mission owing to the importance for secrecy. As always, should any member of your team be caught or killed, the Secretary will disavow all knowledge of your actions. And Mr. Peerless, make sure the battery in your camera is working today...

This message will self-destruct in five seconds.
Posted by The Peerless at 7:51 AM 2 comments: 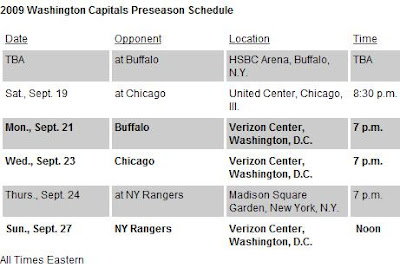 September 23rd and 24th... home to Chicago, away with the Rangers.
NHL bastids...