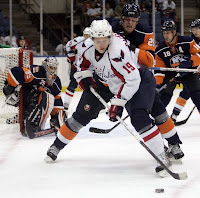 Career average (per-82 games): See above

Fearless’ Take: Well, the year was worth the wait, wasn’t it? There were a few Caps fans who might have thought last year, “what’s he waiting for?...what is he spending another year in Sweden for?” Well, the player that arrived last year was NHL-ready. The team brought him along slowly, starting him on the wing, instead of burdening him with the added responsibility at both ends playing center would have entailed (thanks might be owed to Glen Hanlon here). But when he moved to the pivot, and when he stepped up to the top line to stay, his year took off. From the time he potted an overtime winner in Bruce Boudreau’s coaching debut in Philadelphia through the end of the season, he was 13-47-60, +18 in 61 games. Over the last 18 games, in which the Caps went 14-4-0, Backstrom was 5-14-19, +16. That last number is not a misprint. He is not what one would necessarily call a superior passer in the same sense one would use that term for Sidney Crosby, but what he is, is a superior playmaker. He sees the play and takes (or, rather, gives to his teammates) what is available, displaying an amazing patience for a rookie. What was mentioned in advance of his arrival, but perhaps not fully appreciated until he was seen in action, was his defensive ability. Backstrom was not the rookie who shirked his responsibility in his own end. That was true in spades down the stretch.

Cheerless’ Take: scratch-scratch-scratch…hmm…well…maybe he should shoot more (he was fifth on the team, cuz…he shoots enough, just fine). OK, he needs to do better on faceoffs (his 46.3 percent success rate was better than Crosby’s 45.5 in his rookie year). Well...just stick it in yer flygplatsen.

The Peerless’ Take: It would be really hard to come up with a complaint about Backstrom’s play, and we suppose that’s really the point. He did a lot of things very well. That’s not to say he can’t, won’t, or shouldn’t improve some things, but he had the look of someone who has been at this for a while. There weren’t many situations in which he looked as if panic was an option. He did have a couple of bumps in the road – in mid-December, when he went 2-2-4, but was -6 over a four-game stetch (three of which the Caps lost), and a nine-game stretch in February in which he had seven assists (no goals), but was -7, mostly against inferior competition (Atlanta twice, Florida, Tampa Bay, and Columbus). But, he came within an eyelash of winning the rookie scoring title (finishing three points behind Patrick Kane), led all rookies in assists, was third in plus-minus, tied for second in game-winning goals, tied for the lead in even-strength scoring, and was third in power play scoring among rookies. Was it a case of being the beneficiary of Alex Ovechkin – his ability to both occupy defenders and to finish plays? Or was it a case of Backstrom being the set-up guy folks had in mind when thinking, “if Ovechkin only had a playmaker?” Either way, it is a chicken-and-the-egg question Caps fans would like to spend the next 15 years pondering. 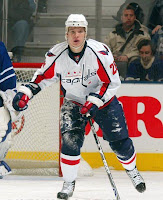 We’re down to the last three…

Feerless’ Take: You listen to some folks talk about Semin, and you get the impression he is the most gifted talent on the team, surpassing that of even Alex Ovechkin, at least in terms of the offensive end of the ice. He is certainly a scorer – a 30-plus goal capable scorer, despite having fewer than 200 games of NHL experience. Last year was a lost one in some respects for Semin. He played in only six of the first 23 games, posting one goal and one assist and going minus-2. That was a pretty deep hole out which he had to climb. But he did end up netting 25 goals in his last 57 games, a 36-goal pace that was just behind his 38-goal performance of 2006-2007. For a player who shoots from distance, as opposed to a player who scores more goals from in close on rebounds and loose pucks, Semin is a very efficient shooter. He scored on 15.6 percent of his shots two years ago, when he had those 38 goals, and was successful 14.1 percent of the time last year. What he doesn’t do is shoot the puck, at least as much as one might think a “sniper” would – he was 89th in the NHL in shots last year and 30th the year before (by way of comparison, in 1997-1998, when Peter Bondra had 52 goals, he was fifth in the league in shots). Part of this is that there is but one puck to shoot, and Alex Ovechkin is on the firing end of it more than anyone in the league. Part of it, too, is that sometimes, Semin seems intent on making the last deke, turn, or curl before he shoots, and he loses the opportunity. The one thing that could help him this year, that could complete his education as a scorer, is being on the receiving end of plays that Sergei Fedorov can set up.

Cheerless’ Take: You’d like us to think that Semin is Pavel Bure in waiting, wouldn’t you? Well, for as much grief as Bure got for being a 100-foot player, he was +42 over his career of 702 games. He was never worse than -14 in any full season. Semin is already -27 in 192 games and has never been a plus player in any of his three seasons. He was -18 last year, for heaven’s sake -- -16 in those last 57 games you talked about. Maybe it was that ankle that had him on the shelf for 17 games early, or maybe he just isn’t paying enough attention in the defensive end of the ice. He was on the ice for 49 even strength goals in 63 games. That was third worst on the team among forwards, and the other two – Alex Ovechkin and Nicklas Backstrom – both played in 19 more games than did Semin.

The Peerless’ Take: OK, Semin isn’t going to win a Selke Trophy. How many top-end goal scorers do? What is lost sometimes in Semin’s brief career to date is that he really has had one full season. His first year consisted of 52 games, and last year it started slowly with those 17 games missed in the first 23. Healthy, he is probably a point a game player, if not this year, then soon. He could be a 50-goal scorer, if not this year, then soon. He won’t be 25 until next March, so he has some time yet before he hits his prime. The question is not skill – he has that. It is maturity. Can he avoid the oddly boneheaded play that comes at the most inopportune time? Can he play passable defense on at least an occasional basis? Can he hone his judgment to know when to have his SportsCenter moment, when to make the smart pass, or when to just fire the puck? Semin is a work in progress. That’s really the charitable way of putting it. But folks got a glimpse late last year of the effect of a Sergei Fedorov on Semin’s play. Early on, at least from our perch, Semin looked to be almost too reverential in his approach to playing with Fedorov. But when they finally got it, Semin’s production improved considerably. With a whole season, it could be a very big year. But that’s the step Semin hasn’t yet taken.

This wasn't exactly what we had in mind

A few of days ago, we noted an article in the Washington Post on hockey moms and suggested that October -- that month of first chill and kids starting to lace 'em up -- be designated "Official Hockey Mom Month."

Well, the Flyers have gone and done it. Not proclaim a "hockey mom month," but...oh, let's Flyers' founder Ed Snider tell it...

“Because of the tremendous amount of publicity she has brought to our sport, we invited the most popular hockey mom in North America to our home opener to help us get our season started.”

That's right, Sarah Palin, governor of Alaska and candidate for Vice President of the United States, will drop the puck on the Flyers' home season when Philadelphia hosts the Rangers this Saturday.

Hide the moose!
Posted by The Peerless at 9:21 AM No comments:

Email ThisBlogThis!Share to TwitterShare to FacebookShare to Pinterest
Labels: Flyers, things that make you go 'hmm...'

Last night, the Hershey Bears gave rude notice to the Wilkes-Barre/Scranton Penguins (and the rest of the AHL, for that matter) that they are going to be a team to be reckoned with this year. The Bears got a goal from Keith Aucoin 96 seconds into the game and never looked back as Hershey gutted and left on the ice their opponents in an 8-4 win. In the mauling, the Bears...
- Went 5-for-7 on the power play
- Had a hat trick from returning forward Graham Mink
- Had five point nights from Mink (3-2-5) and Aucoin (1-4-5)
- Had multiple point nights from Alexandre Giroux (1-2-3), Chris Bourque (1-2-3), and Andrew Gordon (1-1-2)
- Saw Matthieu Perreault score his first goal in a Hershey sweater
- Abused two Penguin goaltenders (David Brown and Adam Berkhoel) for eight goals on 30 shots

Interesting this should have happened, because earlier in the week, Penguin forward Jonathan Filewich was talking about the new Penguins and what they were in for in joining the club...

"They know what is expected. We don’t lose here. That’s just how it is."

Well, last night might not have qualified as a loss. A pounding? A strafing? A beating? OK, but not a "loss."
Jonathan Bombulie, who is actually a very entertaining beat writer for the Penguins at the Citizens Voice in Wilkes-Barre, commented on the Penguins as a franchise that...

"The Hershey Bears and their nine Calder Cup championships probably aren’t jealous of the Penguins. Neither are the Chicago Wolves and their two titles in the last seven years. No, the Penguins aren’t a model like those who prowl the catwalk at fashion week in Paris or adorn the pages of the Sports Illustrated swimsuit issue. They’re more like the model in the lingerie section of the Sears ad."

Last night, they were like the fertilizer ads at the feed store. And the Bears?...It was only the first of 80 regular season games, but they were giving early indications of just how loaded the Caps are from top to bottom throughout the organization.