With apologies to the poet 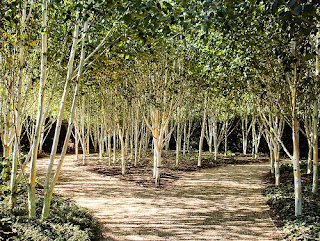 I shall be telling this with a sigh
Somewhere ages and ages hence:
Two roads diverged in a wood, and I--
I took the one less traveled by,
And that has made all the difference.

Years from now, players, management and fans might look back upon this game as that divergence -- on one road more traveled lies the wreckage of playoff hopes unrealized.  Game 7 losses, leads squandered, players unfulfilled, fans disappointed.  The one less traveled is the one on which the Caps muster the heart and character to take on an opponent's best and repel it, to face failure and find success.

This team is supposed to take that road less traveled...

... the one at the end of which stands a Stanley Cup.

Walk that road proudly, starting tonight.
Posted by The Peerless at 5:13 PM 4 comments:

Email ThisBlogThis!Share to TwitterShare to FacebookShare to Pinterest
Labels: Best of The Peerless, Washington Capitals

There are no two words in the English language that strike as much fear in the hearts of Caps fans as “Game Seven.” For the ninth time in franchise history the Caps will skate in a Game 7 when they take on the Montreal Canadiens tonight. Nine… nine circles of hell. NO! We will fight the urge to dwell on the negative here.

The Caps have been a two-headed monster in this series, one a fierce, sharp-fanged beast that won three games by a combined score of 17-9. The other is a sleepy, dull witted sort that slumbered most of the way to three losses by a combined score of 9-4. Game 6 gave evidence of the fierce beast making another appearance after launching 94 shot attempts (54 on goal) at Jaroslav Halak in a 4-1 loss. Try as they might in Game 6, though...

My, my… it must be a Game 7 if Jedi Master Yoda is to make an appearance. Can I call you “Yo?”

OK, so… it is Game 7, and the Caps are trying – sorry – have to call up their best effort. How can they be strong enough to deal with the pressure of the situation? How can they summon their “inner Jedi?”

“A Jedi's strength flo-o-o-o-o-ws from the Force. But beware the dark side. Anger, fear…. The dark side of the Force are they. Easily they flow, quick to join you in a fight. If once you start down the dark path, forever will it dominate your destiny. Consume you it will, as it did Caps teams from the past.”

Is the dark side stronger?

But how are the Caps to know the good side from the bad?"

"They will know... when they are calm, at peace… A Jedi uses the Force for knowledge and defense, never for attack."

“In this game they must, perhaps.”

So, then, it is important for the Caps to feel the Force…

“…flowing around them. For their ally is the Force. And a powerful ally it is. Life creates it, makes it grow. The Force surrounds them and binds them. Luminous beings are we not this crude matter. They must feel the Force around them. Here, between you, me, the tree, the rock...oh, Mike Green’s head that is…everywhere! Even between the Alexander Semin and the back of the net."

Have the Caps trained enough to solve their problems on the power play?

“No more training do they require. Already know they, that which they need.”

Then they are Jedi.

“No. Not yet. One thing remains. Halak. They must confront Halak. Then, only then, Jedi will they be. And confront him they will.”

Bill Clinton once said, “all great contests are head games.” And there is no bigger head game in hockey than a a goaltender getting into an opponent’s head and convincing them that he is invincible. Jaroslav Halak, shaky and full of holes in Games 2 and 3, became the cloned offspring of George Hainsworth, Georges Vezina, Jacques Plante, Ken Dryden, and Patrick Roy. 90 saves on 92 shots in Games 5 and 6, many of those saves causing Caps' eyes to roll to the rafters in frustration.

And this is really what it comes down to now – the ability of the Caps to translate pressure into goals. Through six games the Caps have pummeled Canadien goaltenders Halak and Carey Price to the tune of exactly 250 shots on goal (41.7/game). Montreal’s defense has not been able to contain the Caps in that regard, the result has been entirely a product of how well the goaltender performed in fending off the assault. Nothing else really appears to matter – not the Caps defense or goaltending (except for a poor effort in Game 2, it has been entirely adequate), not the Canadiens’ power play (held below its season conversion average), not the phases of the moon.

There isn’t much science about this at this point. It is a matter of players who have been launching shots at the goal to get those shots into the goal. They do, and the Caps advance. They don’t and it’s tee times on the weekend instead of a national-TV game with the Flyers.

And if there is anyone who would know about launching attacks, it would be The General himself. Ten-HUT!