Washington Capitals: One and Done -- Shawn Cronin: Going in for a Future Hall of Famer? No Pressure 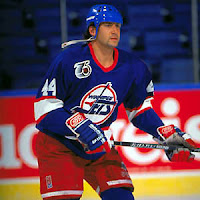 In our first look at those players who dressed for only one game with the Washington Capitals, we looked at a player whose stop in the DMV came in the middle of a long career.  In this look back, we meet a one-and-done-er who played his one game with the Caps as his NHL debut before going on to compile a larger body of work elsewhere.

Shawn Cronin had the sort of early start to his hockey journey that might seem a bit common these days, but was less so back in the early 1980’s.  As a 19-year old, undrafted by any NHL team, he landed at the University of Illinois-Chicago in 1982.  After spending four years playing defense for UIC, he was signed as a free agent by the Hartford Whalers in March 1986.  He broke into pro hockey splitting time in the 1986-1987 season skating with the Salt Lake Golden Eagles in the International Hockey League, going 8-16-24 in 53 games there, and with the Binghamton Whalers of the American Hockey League, where he recorded one assist in 12 games.

Cronin spent another season in Binghamton, but it was his last in the Whaler organization.  He would be signed by the Capitals the following June, but he seemed destined to spend another season in an AHL sweater.  Then fate intervened.  Washington and the New York Rangers faced one another in a home-and-home set of games in October, the first of which was played in Manhattan.  In the 5-1 loss to the Blueshirts, defenseman Larry Murphy was injured, the victim of what was characterized as a “knee-to-knee leg whip” by the Rangers’ Tony Granato.  Murphy was held out of the rematch two days later, and Cronin was called up from the Baltimore Skipjacks to take his place in the lineup.

We would like to say that Cronin’s NHL debut was a success, both personally and for the team.  Sadly, it was not.  The Caps opened the scoring three minutes into the game on a power play goal by Dave Christian, but the Rangers answered with three power play goals of their own and added a Guy Lafleur tally early in the third period to sweep the home-and-home with a 4-1 win.  For his part, Cronin recorded neither a point nor a shot on goal in what would be his first and last appearance with the Caps.

It would not be his last game in the NHL, though.  The following summer, the Caps and Cronin parted ways, and he signed as a free agent with the Philadelphia Flyers.  He never so much as dressed for training camp with the Flyers, traded to the Winnipeg Jets a month after his signing.  We use that word “traded” advisedly.  The return for Cronin was “future considerations” which would be cancelled as part of a trade that sent Keith Acton and Pete Peeters to Philadelphia by Winnipeg in October 1989.  In effect, Cronin was given to the Jets.

Nevertheless, Cronin did play three seasons with the Jets, recording one goal and 13 assists in 193 games.  He also logged 703 penalty minutes in those 193 games, largely on the basis of 61 fighting majors, earning him the nickname, “Cronin the Barbarian.”

Following the 1991-1992 season, Cronin spent another short stay in a city for which he would not dress.  In August of 1992 he was traded to the Quebec Nordiques for Dan Lambert, but barely a month later, on October 4th, he was waived and claimed by the Flyers.  He player 35 relatively quiet (37 penalty minutes) games for the Flyers in the 1992-1993 season while posting a career high in goals (two) before being traded to the San Jose Sharks for cash in August 1993.  It was there where Cronin spent his last two NHL seasons.  He would play another two seasons with the Fort Wayne Komets in the IHL before bowing out of pro hockey at the age of 33.  He finished the NHL portion of his career having played in 292 regular season games with four clubs, the first and only one of which was played in Landover with the Capitals as a fill-in for a future Hall of Famer.


Photo: Hockey Hall of Fame
Posted by The Peerless at 12:00 PM No comments: