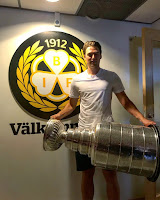 “You cannot step into the same river twice.”
-- Heraclitus

Christian Djoos was the 69th defenseman of 77 selected in the 2012 Entry Draft, taken in the seventh round (195th overall) by the Washington Capitals.  That is not a starting point from which successful NHL careers are often born.  For example, since the 2005 draft, 51 defensemen have been taken in the 191-200 overall pick range.  Of that group, only ten have dressed for at least one NHL game, and only four have appeared in at least 100 NHL games.  Djoos happens to be one of the four (108 games).

It was a nice foundation from which Djoos might have had a better sophomore season.  He did not.  He got off to a slow start, appearing in 28 of the Caps first 30 games and going 0-4-4, plus-6, while averaging 13:13 in ice time per game.  As if the slow start was not bad enough, his season really went off the rails in that 28th game against the Detroit Red Wings.  He skated 16:23 against the Wings that, oddly enough, was the most ice time he logged in a game since Game 2 of the season against Pittsburgh (16:52), but he suffered a thigh injury that developed into compartment syndrome that required surgery.  He missed 24 games and did not return to the lineup until February 9th.

Djoos dressed for the next eight games, but with the acquisition of Nick Jensen, he was then relegated to press box duty, missing the next ten games.  However, when Michal Kempny was injured in a game against Tampa Bay in late March, ending his season, Djoos returned to the lineup once more and dressed for the last eight games of the regular season. 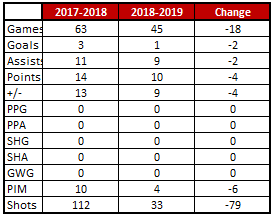 Fearless’ Take… Despite the injury and the intermittent appearances in the lineup, Djoos averaged 0.22 points per game, precisely his average in his rookie season.  His plus-9 in 45 games was an equivalent pace to his plus-13 in 63 games last season.  And, the Caps recorded a better points percentage in games in which Djoos played this season (.622) than they did in the games he played in his rookie season (.587).

Cheerless’ Take… This season looks a lot like last season for Djoos on a per game production basis, but there just seemed to be something…off.  There was the matter of his ice time and the team’s success.  It was almost spooky how that looked like last season in one respect.  The Caps were 9-9-2 in the 20 games last season in which he skated at least 15 minutes, and they were 5-5-1 in the 11 games in which he logged at least 15 minutes this season.  Then there were the 5-on-5 shot attempts on ice.  The Caps as a team were slightly better this season in shot attempts-for percentage at 5-on-5 (49.04) than last season (47.98), but Djoos’ on ice numbers in this category were worse, dropping from 51.79 percent last season to 48.87 this season.

Odd Djoos Fact… In the seven-round era of the NHL Entry Draft (since 2005), the Caps have drafted 35 defensemen.  No defenseman drafted lower (and there have been only five) have appeared in more games than Christian Djoos (108).  Of that group, Djoos is the only one among the lowest 23 defenseman picks to appear in at least 100 games with the Caps.  The next lowest overall pick among defensemen to play in at least 100 games with the Caps since the seven-round draft began is Dmitry Orlov (taken 55th overall in 2009 with 447 games played with the club).

The Washington Capitals had their problems in January, suffering a seven-game losing streak to end the month and head to the All-Star Game break.  When they returned at the start of February, they started the month with a six-game home stand, over which they went 3-1-1 in their first five games.  The Los Angeles Kings came to town to wrap up the Caps’ home stand, bringing with them a four-game points streak (3-0-1), their longest points streak since a five-gamer in December (4-0-1).

The teams came out firing.  Washington got things started with an Alex Ovechkin goal just over three minutes into the game, but by the time the first period was over, the game was tied, 2-2.  Los Angeles took their first lead less than four minutes into the second period, but Evgeny Kuznetsov tied the game less than three minutes later.  Four minutes after the tying goal, Kuznetsov skated into the Kings’ zone and peeled off to the left wing wall.  From there, he fed it to Ovechkin skating down the middle, and Ovechkin relayed it to Djoos at the right wing faceoff dot.  Backing off to the goal line, Djoos tried to feed the puck back to Ovechkin for a shot from point-blank range.  The puck pinballed back in the direction of Djoos, and just before Brendan Leipsic could sweep it away, Djoos shoveled a one hander up and over sprawled goaltender Jonathan Quick and into the back of the net to give the Caps a lead they would not relinquish in a 6-4 win.  For Djoos, it was his only goal of the season in what was his 30th appearance.
Game to Forget…  February 21st at Toronto

The Caps had just wrapped up their annual California trip, winning two of three games, when they worked their way back across the continent with a game in Toronto against the Maple Leafs.  The teams battled to a scoreless tie in the first period, but the Caps broke the ice early in the second period on an Alex Ovechkin goal.  The Caps extended their lead before the second intermission on a goal by Brett Connolly, but Toronto got one back early in the third period to make it a 2-1 game.  Tom Wilson restored the Caps’ two-goal lead two minutes later with a shorthanded tally, and it was enough to hold off the Maple Leafs, 3-2.  For his part, Djoos had a quiet night – no points, and even rating, one shot attempt (blocked), and one credited hit in a season-low 8:17 in ice time.  He skated only two shifts in the third period, the latter lasting only eight seconds, and skated no shifts in the last 15:37 of the game.

Postseason…  It was a thoroughly forgettable postseason for Djoos.  He dressed for only the first three games of the series, averaged just 7:24 in ice time, and recorded neither a point nor a shot on goal while posting a minus-3 rating.  No defensemen in the postseason through Saturday’s games among the 113 to dress averaged less ice time per game than did Djoos.

Looking ahead… Christian Djoos is an arbitration-eligible restricted free agent.  Qualifying him would cost the team less than $700,000, and given the unlikely re-signing of Brooks Orpik, Michal Kempny coming off a season-ending injury, a possible trade of Matt Niskanen to free cap space, and uncertainty about who among the defensemen in Hershey could legitimately challenge for a roster spot, re-signing Djoos appears likely.

Christian Djoos was one of four defensemen younger than 25 years of age to dress for the Caps this season.  While that suggests a young wave poised to take its place on the roster, Madison Bowey is now in Detroit (traded for 28-year old defenseman Nick Jensen), and Tyler Lewington dressed for two games and does not appear to have a roster spot waiting for him.  That leaves Jonas Sigenthaler and Djoos, for the time being, as the young defensemen poised to get regular ice time with the Caps for the time being.  If Orpik and/or Niskanen depart, the Caps might not be able to afford the “marking time” sort of season Djoos had following up his rookie season.  While his second season looked a lot like his first, it wasn’t quite stepping into the same river twice.  The Caps might not be able to afford a third season of the sort Djoos has had to open his career.  More will be expected.