The Washington Capitals face the New York Rangers for the third and fourth times in six games when they play a home-and-home set against the Blueshirts Sunday in Washington and Tuesday in New York.  The Caps are fresh of a sweep of a two-game set on home ice against the New Jersey Devils, while the Rangers carried a three-game winning streak into their Saturday matchup against the fading Philadelphia Flyers.

Recent success by the Rangers have propelled them into the playoff conversation.  A 5-1-1 record over seven games heading into their Saturday contest in Philadelphia have them three points behind the Boston Bruins for the fourth and final playoff spot in the East Division, although the Bruins have three games in hand.  It is the third-best record in the league over that span in points percentage (.786), trailing only the Caps (6-1-0/.857) and the Colorado Avalanche (6-0-1/.929).

Over those seven games, Mika Zibnaejad leads the league in points (17), and his seven goals trail only Alex Ovechkin (eight).  It did not hurt that he faced the Philadelphia Flyers twice in that span and posted scoring lines of 3-3-6 in each game.  He is one of two players with at least one six-point game in the league this season (Edmonton’s Leon Draisaitl is the other) and the only one to do it twice.  He is also one of only three players to post two six-point games since 2005-2006 (Daniel Alfredsson and Sidney Crosby were the others) and the only one to do it twice in one season.  He is the first player with two games with six or more points in one season since Eric Lindros had one goal and six assists in an 8-5 Flyers win over the Ottawa Senators on February 26, 1997, and followed that up with two goals and four assists in a 6-3 win over the Toronto Maple Leafs on March 19, 1997.

Those two six-point games and 17 points in his last seven games have resurrected a season that was shaping up to be a disappointment.  He was just 3-6-9, minus-5, over his first 25 games despite getting almost 20 minutes of ice time per game (19:47).  He had one streak of six game without a point in that stretch and another of five.  He has points in five of his last seven contests.  Zibanejad is 12-11-23, plus-7, in 29 career games against Washington.

Will he go, or will he stay?  Ryan Strome has popped up in the trade rumor conversation of late.  But he is not making it easy for the Rangers’ front office to pull the trigger.  He is third on the team in goals scored this season (11) and second in points (30).  He leads the Rangers in assists (19).  And over the Rangers’ 5-1-1 stretch going into Saturday’s game, he is 2-10-12, plus-7 in seven games.

When Strome is on, the Rangers are happy.  New York is 8-0-0 in games this season when he has a multi-point game and 8-0-1 when he scores a goal.  On a per-game basis, Strome is turning this season into a career year.  His 0.34 goals per game is far and away is best in eight NHL seasons (0.26 per game last season being second-best), his 0.59 assists per game tying his previous best (0.59 last year), and his 0.94 points per game is 0.10 points per game better than last year’s 0.84 mark.  Part of his goal scoring improvement is a more aggressive posture with respect to shooting, his 2.59 shots per game being a career high.  Odd Strome fact… He was taken one spot ahead of teammate Mika Zibanejad in the 2011 Entry Draft, Strome taken fifth and Zibanejad sixth.  Neither was taken by the Rangers.  Strom was selected by the New York Islanders, Zibanejad by the Ottawa Senators.  The Rangers took J.T. Miller with the 15th overall pick with their first round selection.  Strome is 8-14-22, minus-3 in 28 career games against the Caps.

It might seem odd to use the phrase “the clock is already ticking” with respect to a 25-year old goaltender, especially given that many goalies have a longer developmental arc before reaching their prime than skaters.  But that was the way New York Post columnist Larry Brooks concluded his piece on Ranger goalie Igor Shesterkin on Thursday.  This has not been the easiest sophomore season for the Rangers' goalie.  After wowing Rangers Nation with a 10-2-0, 2.52, .932 record in a brief stint last season, he opened this season with three losses in his first four appearances (0-2-1, one no decision), a 2.98 goals against average, and a .886 save percentage.  He came back with a three-game winning streak (3-0-0, 1.65, .940), but then he suffered another three-game losing streak that was more bad support than bad performance (0-3-0, 2.40, .927).  He performed well over a five-game stretch (3-2-0, 2.20, .928) before suffering a strained groin that kept him out for three weeks.  He returned to the lineup on Thursday in the Rangers’ 8-3 win over Philadelphia and stopped 41 of a season high 44 shots faced.  It has been a season marked by highs and lows, inconsistency, and a bit of injury to round it out.  Shesterkin is 2-0-0, 1.50, .950 in two career appearances against Washington. 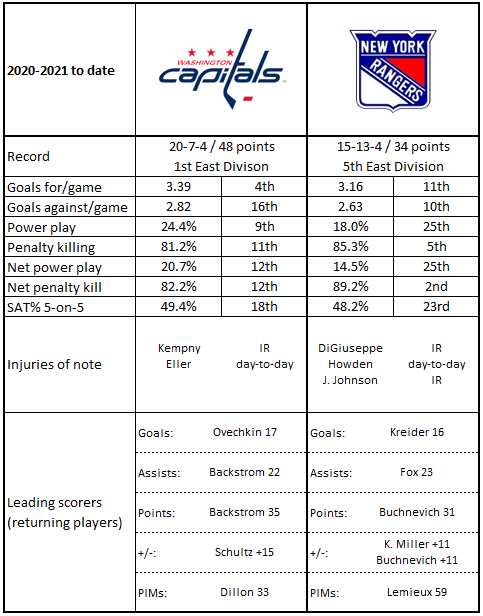 1.  Over their 5-1-1 run, the Rangers are the only team in the league with two shorthanded goals scored.

2.  While the Rangers have been successful over those last seven games, their success has not come by playing nice.  Their 0.85 penalties per 60 minutes is most in the East Division over that span and fifth-most in the league.

5.  After allowing four or more goals in each of three games before their 5-1-1 stretch, the Rangers have allowed more then three goals only once, in a 5-4 overtime loss to Pittsburgh on March 15th.

1.  If the Caps score two goals on Sunday, it will make it an even 400 goals scored on home ice against the Rangers in the all-time series.

3.  The Caps lead the league in second period goals scored overall (47), three more than the Rangers and Tampa Bay (44).

4.  Washington is second in the league in wins when leading after two periods (17), one fewer than Tampa Bay.

5.  The Caps have more wins when outshot by opponents (ten) than any team in the East Dvision.

The Rangers have dressed ten defensemen this season.  Only one has appeared in all 32 games going into Saturday’s action.  Not Adam Fox, not K’Andre Miller, not Brendan Smith.  Ryan Lindgren has answered the bell 32 times for the Rangers this season.  His offensive numbers been decent – he is one of three Ranger defensemen without a goal this season, but he is second in assists (nine) and points (nine) among the ten blueliners.  His plus-8 rating ranks third among Ranger defensemen, he is third in shots on goal (37; he is one of 14 players in the league with at least 35 shots on goal and no goals), and his 19:46 in average ice time ranks fourth.  It paints a picture of a reliable player who does not impress with flash but provides solid minutes each night.

Lindgren came to the Rangers in the 2018 trade that sent Rick Nash to the Boston Bruins.  He was taken by the Bruins in the second round of the 2016 Entry Draft (49th overall), but he never played for the Bruins before he was sent to New York.  He is in his third season with the Rangers and has a kind of “Nick Jensen” quality about his play (well, before Jensen went on a scoring spree).  Lindgren has only one goal in 97 career NHL games.  He is 0-1-1, plus-5, in six career games against the Caps.

The king of goal scorers is back.  After posting just seven goals in his first 19 games this season, Alex Ovechkin has ten in his last ten games.  His eight even strength goals is equal to the total goal production of the second-highest goal scorer over the period (Mika Zibanejad).  His 3.24 goals per 60 minutes over that span is second in the league among players appearing in five or more games (Rocco Grimaldi: 3.34).  No player in the NHL over that span has more total goals, and it isn’t as if his rating has suffered for so much time in the offensive end.  His plus-10 over that span is tied for fifth-best it the league.

Ovechkin is chasing a record that a few weeks ago seemed out of reach.  Coming into this season Ovechkin recorded 30 or more goals in each of his first 15 seasons, tied with Mike Gartner for the most all-time to start a career.  A 30-goal season this year would allow Ovechkin to hold that record alone, and he would be within one of Gartner for the most 30-goal seasons in NHL history (17).  With 17 goals in 29 games, he is on a pace to finish with exactly 30 goals.  Ovechkin has three goals in four games against New York this season and is 38-20-58, minus-11, in 63 career games against the Rangers.

Scoring has been the issue for the Caps against the Rangers this season.  They have managed only six goals in four games, going 1-3-0 in the process.  Perhaps it is the Caps having a bit too much respect for the Rangers’ team speed, their inability to solve the Rangers’ forechecking, or just a matter of the Rangers being “that team,” the kind of team you might find in any sport that seems to have one opponents’ number, at least for a season.  It is past time for the Caps to assert themselves.