The Peerless Prognosticator is ON THE AIR!!! -- Caps vs. Flames, October 30th

Tonight the Capitals look to get back in the left column in the standings as they travel to Calgary on the last leg of their three-game road trip to take on the Flames. Calgary is another one of those clubs the Caps do not play often, and it is a city they visit even less…

“Yeah, sort of like that whole ‘Romulus and Remus’ thing and ‘Rome?’”
So Calgary is…

“The Rome of Alberta, yes.”
I never would have guessed.


“Oh, yeah…and then there is the Calgary cuisine, but let us have you listen to a real expert in that area.”
Oh, and who is this?


“We’d like you to meet our sister, ‘Alberta.’”
Let me guess…the province is named for her.


“How’d you guess?!”
Well, it seems Bloody Caesars are flowing freely in the prairies, but we have a game to look forward to, so let’s get on with it. The Caps are coming off a disappointing 2-1 loss to the Minnesota Wild on Thursday, and tonight is their chance to salvage a winning road trip. As we noted, the Caps do not play this club often (30-40-13 in franchise history) and has had little success on Flames’ ice (8-25-7 overall). The Caps have not won in Calgary since taking a 4-2 decision exactly four years ago this day. No Capital currently on the roster had a goal that night, two having been scored by Richard Zednik and the other two by Dainius Zubrus. Former goalie Olaf Kolzig stopped 37 of 39 shots in the win. Alex Ovechkin did, however, have a pair of assists, so there is some memory of winning out west. Only six players on that late October club currently skate for the Caps – Ovechkin, Matt Bradley, Boyd Gordon, Brooks Laich, Alexander Semin, and Mike Green.

As for Calgary and the present, the Flames dropped a wild 6-5 decision to Colorado on Thursday after winning three in a row. The overall numbers for the Flames look like this… 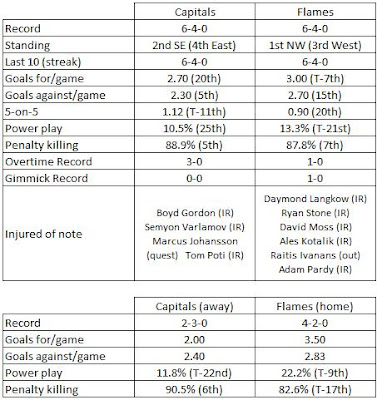 The Flames might have the appearance of being in a defensive rut. They allowed ten goals in their last two games after shutting out San Jose. On the other hand, the Flames might have sacrificed a game to get a “correction.” Goalie Mikka Kiprusoff had played in eight of the Flames’ first nine games, and after posting the shutout against San Jose last Sunday, was lit up for four goals in a shootout win over Edmonton on Tuesday. That might have been the hint to give Kiprusoff a breather in favor of Henrik Karlsson, who held Columbus to two goals in his only appearance this season so far. Coach Brent Sutter sent Karlsson out against Colorado on Thursday, and the rookie was roughed up for six goals on 36 shots in the loss. But Kiprusoff should be rested and ready to face the Caps tonight. He brings a 2-2, 2.44, .912 career record against Caps into this game.

This is Jarome Iginla’s 14th season in the National Hockey League. Let that sink in a moment. At least for us, it seems like only yesterday that Iginla was breaking into the league, a combination of goal scoring and glass shattering skill, not unlike a certain youngster from Moscow who would break into the league almost a decade later. But we might be seeing the effects of more than 1,000 games in the NHL on Iginla’s production. Since posting 50 goals in the 2007-2008 season, his goal scoring dipped to 35 in 2008-2009 and 32 goals last year. He has only two in ten games so far this year. Iginla has been a remarkably durable player for one who plays with such a physical edge. He has played in all 82 games in seven of his 13 seasons before this one and had played in all ten games for the Flames thus far. In 16 career games against the Caps Iginla is 6-9-15, including goals in three of the last four games he has played against Washington.

Bet you didn’t have “Rene Bourque” as the Flames’ leading scorer ten games in. But that’s who tops the points ranking for the Flames at the moment. In fact, Bourque comes into this game as one of the hottest players in the league having recorded five goals (including a hat trick) and three assists in his last four games. It is not what Bourque is best known for, at least in terms of his history against the Caps, against whom he is 2-2-4 in four games with 19 penalty minutes. The entire total of penalty minutes came in this sequence…

Jay Bouwmeester continues to be an enigma. In 92 games with the Flames since being traded to the Flames from Florida in June 2009 he is 4-28-32, even. And he has not been an impact defenseman at the other end of the ice, either. Hardly the stuff one might expect of the third-highest paid defenseman (cap hit) in the league. He had a grim start to this season, posting no points and a minus-2 in his first four games. But he was part of a 1-0 shutout effort against Nashville on October 19th (plus-1 in the 1-0 decision) and including that game is 1-2-3, plus-6 in six games. Including his career in Florida he is 6-13-19 in 39 games against the Caps.

We saw this movie last season. As a Capital in 2009-2010 Morrison was 3-5-8, plus-5 in his first ten games. Through his first ten games this season he is 3-6-9, plus-2. The thing is, in his last 64 games with the Caps last season he was 9-25-34, minus-3 and scored only three goals after December 3rd, covering 47 games. Whether that will happen to Morrison in a Flames uniform this year one cannot say. But for the moment he is on a run with points in five of his last seven games, including a two-goal game against Edmonton last Tuesday. In ten career games against the Caps he is 2-5-7.

The top-pair for the Caps returns to their home town for this one. But the reason they get highlighted here is that there is going to be pressure on them at both ends of the ice. On offense, the question is whether Green is still suffering lingering effects from his recent injury. He logged more than 30 minutes in his last game (the 2-1 loss to Minnesota) and recorded an assist on the late goal. But Green does not have a goal yet this season and has recorded only 15 shots in seven games. At a similar point last season Green had only one goal and had 20 shots. Not remarkably different, but still, Green doesn’t look 100 percent out there in the offensive end. In the other end, the ice time Green and Schultz get will be important. If Kiprusoff is on his game, there will be little margin for error in the defensive end in what could be a low scoring game. Mistakes have to be kept to a minimum. One could be enough to determine the outcome.


1. Set the alarm clock. The Caps have the fewest first period goal so far this season (four, tied with Atlanta). On the other hand, Calgary is second in the league with 14 goals in the opening frame. Come out sleepy, and the competitive portion of the game could be over quickly.

2. Pressure late. Calgary might have the second highest number of first period goals, but they also have allowed the most third period goals (13, tied with Atlanta and the Rangers). With the Caps having scored 12 third period goals so far (fourth in the league), there could be fireworks late, and not of a sort the home team will appreciate.

3. Positive Power. Over their last 19 games, including playoffs, the Caps are 5-for-78 on the power play (6.4 percent). They are 3-for-35 on the road over that span 8.6 percent). Sometime, this has to change. There is too much talent for this sort of drought to continue unabated. Tonight would be a good time for that drought to end, but it will be difficult against the sixth best home penalty kill in the league.

In the end, this game is likely to turn on how well and how often the Caps can penetrate Miikka Kiprusoff. And what the Caps might be able to rely on is inconsistency that has crept into the goalie’s game. In his eight appearances this season he has two shutouts, but he also allowed three or more goals in five other appearances. He has allowed three even-strength goals in four of his last six games (the other two being shutouts), and the Caps are an efficient five-on-five club. But we would still like to see that power play pot a couple.