The Peerless Prognosticator is ON THE AIR!!! -- Game 66: Capitals at Rangers, March 3rd

It has been more than two months since the Washington Capitals won four straight games, but when they take the ice on Sunday afternoon against the New York Rangers at Madison Square Garden, that is what they can accomplish.  For the Rangers, whose loss to the Capitals last Sunday set in motion the Caps’ current winning streak, it will be a chance to avenge that loss and prevent the Caps from sweeping the season series.

In three games against the Rangers, the Caps have outscored the Blueshirts, 15-11, out-shooting them by a 101-93 margin, and converting three of nine power plays (33.3 percent).  If there has been a blemish on the record for the Caps, it is that they have killed only seven of ten shorthanded situations (70.0 percent) in the three games played so far.

Two players account for six of the 11 goals scored by the Rangers in the three games played against the Caps so far – Defenseman Brady Skjei and forward Jimmy Vesey.  Those three goals he has against the Caps this season represent half of Skjei’s season total.  His two-goal game in last Sunday’s 6-5 overtime loss to the Caps was his first multi-goal game in the NHL and are the only two goals he has on the road this season.  Skjei might be thought of as an under-the-radar sort of player, especially given that he plays in the league’s biggest market.  Two seasons ago, he finished in the top ten among rookie defensemen in goals (5/tied for eighth), assists (34/second), points (39/second), plus-minus (plus-11/tied for second), hits (147/fourth), and takeaways (17/tied for ninth).  For all that, he received one vote (a fifth-place one at that) for the Calder Trophy as the league’s top rookie.  He comes into this game as one of the Rangers’ hotter players, 3-2-5, plus-2, in his last four games.  Skjei is 4-2-6, plus-1, in 10 career games against Washington.

Vesey leads the Rangers in points against the Caps this season (3-1-4).  Once a third-round draft pick of the Nashville Senators (66th overall in 2012).  It did not sit well with Vesey, who spurned a signing offer to choose to remain at Harvard University, complete his four-year stint there, and then explore his options in free agency.  Not even a trade of his rights to the Buffalo Sabres in June 2016 distracted Vesey from his plan.  It set off a bidding war that had him reported to have met with more than half a dozen teams and several others interested.  Then, less than a week as a free agent, he signed a two-year/$7.55 million contract with a heavy emphasis on performance bonuses.

With all of the personnel moves by the Rangers, Vesey has received something of a commitment as a player to build around (although that commitment has limits; he is signed only through next season, upon which he will be an unrestricted free agent).  In his three seasons with the club, he has 20 goals and 89 points.  He also happens to be a team-worst cumulative minus-28 with the club over those three years.  This season, he already has a career-high 18 assists and 34 points, and he needs one goal to tie his career high of 17 goals set last season.  He comes into this game with five goals and five assists in his last 12 games.  In 11 career games against Washington, Vesey is 5-3-8, minus-1.

This is not one of goalie Henrik Lundqvist’s signature seasons.  His 3.04 goals against average his first over 3.00 in 14 seasons.  His .907 save percentage is the lowest of his career.  It has been three seasons since he received any votes for a postseason award.  Over the last two seasons he has as many regulation losses as wins (43).  Unless he gets one in the last 18 games for the Rangers, he will finish this season as the first of his career without a shutout.  He has two more years after this one on his current contract, two years likely to be spent chaperoning a rebuild of the team in front of him and mentoring the Rangers’ next number one netminder, whoever that might be.  Nevertheless, he has been a warrior.  Lundqvist has only two regulations loss in nine games in which he faced 40 or more shots (3-2-2, 2.30, .944).  He has struggled lately, though.  Since the first of the new year, Lundqvist is 5-8-2, 3.50, .889, with two no-decisions in 18 appearances.  In 40 career games against the Caps, he is 21-12-7, 2.77, .906, with four shutouts. 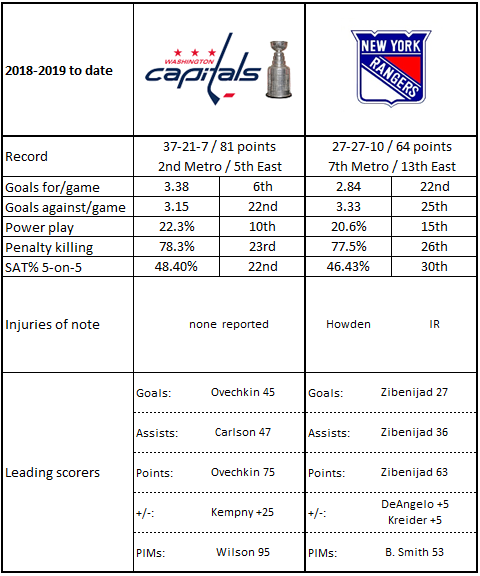 1.  Shooting is apparently the Rangers’ thing, or at least getting shots to the net.  Their 29.1 shots per game is fourth-fewest in the league.

2.  The Rangers are a reasonably stingy team in one respect.  They do not give up bushels of goals at a time on home ice.  Only twice this season have they allowed more than four goals on home ice.  One of those instances was against the Caps, a 5-3 loss to Washington on November 24th.

3.  Only one team has fewer wins this season when scoring first this season than the Rangers (14) – Detroit has done so 13 times.  That is barely more wins than they have when allowing the first goal (13).

4.  The third period of this game could be interesting.  Only three teams this season have allowed more third period goals than New York (77).  One of them happens to be Washington (79/third-most).

3.  Ovechkin does not lead the team in shots on goal against the Rangers this season.  He has 11, while Carlson has 15.

4.  Ovechkin’s 13 hits leads the team against New York this season, as many as Matt Niskanen (seven) and Tom Wilson (six) combined.

5.  Four of the last six games between these teams have gone to extra time, the Caps winning three in the overtime phase, and the Rangers winning one in the freestyle competition.

Between the troubles on the ice, the personnel moves, and just being part of the New York constellation of sports teams, Marc Staal gets lost in the noise.  He just keeps plugging along, though.  Now in his 12th season with the team, Staal is eighth in team history in games played (825) and fourth among defensemen.  He has never been a big offensive numbers player, but he does rank 18th in goals scored among defensemen in team history (41) and is 16th in points (177), testimony to his longevity and durability as a player.  This is actually among his more productive seasons at the offensive end.  His next goal this season will be his fourth and would give him his highest total since he had five in 2014-2015.  He has ten assists, putting him on a pace to finish with 13, which would be more than he has had since that same 2014-2015 season (15).  Just don’t expect him to add to those totals; he does not have a power play point since 2013-2014.  There are indicators of recent struggles in his game that mirror the team’s.  For instance, he has just one “plus” game in his last 17 contests, over which he is minus-10.  He does not have a point in a Rangers win over that same span of games (he has two assists, both in losses).  Staal is 1-9-10, plus-2, in 39 career games against the Caps.

NIc Dowd has two goals in three games against the Rangers this season, tied with Nicklas Backstrom and Tom Wilson for second on the club.  That is a third of all the goals he has this season.  It would be nice if he could add to that total in this game.  Dowd does not have a goal on the road since he had one against the New York Islanders back on November 26th, a streak of 14 road games without one.  Dowd, as a fourth liner, is a bit of an indicator of Caps’ success and the ability to roll four lines.  Washington is 24-8-2 in 34 games in which he skated at least 9:30 this season, 5-7-3 in the 15 games in which he did not.  It helps to have him engaged, too.  Washington is 15-6-3 in the 24 games in which he registered at least one shot on goal, 14-9-2 in games in which he did not.  The odd fact is the coincidence of faceoff success and team success, which goes in the opposite direction of what we might expect.  The Caps are 11-9-1 in 21 games in which Dowd was over 50 percent in faceoff wins, 18-6-4 in the 28 games in which he was 50 percent or lower.  Dowd is 2-0-2, plus-1, in four career games against the Rangers.

The Caps have the hardest strength-of-schedule from here on out.  That puts a premium on taking advantage of the disadvantaged, /www.washingtonpost.com/sports/2019/03/01/heres-how-nhls-super-tight-eastern-conference-playoff-picture-will-shake-out/ and the Rangers qualify in that regard.  It does not get much simpler than that.

We did not get a chance to put up a post-gamer, but with the clock ticking toward four a.m. on the east coast, we have some thoughts after the Caps' 3-1 win over the New York Islanders...

Talk about controlling your destiny.  The Caps have 18 games remaining after the win against the Islanders.  Ten of them are against Metropolitan Division teams, and they have another three -- the entire season series -- in a two-week period against the Eastern Conference leading Tampa Bay Lightning to close March.  It should be interesting.  Or, as Bette Davis put it...