The World Cup of Hockey is about to begin, and we are in the home stretch of the off-season.  Before you know it, the puck will drop on the NHL's 2016-2017 season, and that means it is time to look ahead at what this season might hold in store for the Washington Capitals. 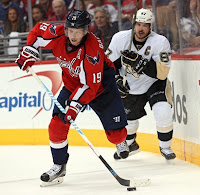 “Nicklas Backstrom came into the National Hockey League in the 2007-2008 season.  Since then, 478 players have appeared in at least 300 games.  Of that group, only four players have averaged more assists per game than Backstrom: Sidney Crosby, Henrik Sedin, Evgeni Malkin, and Joe Thornton.”

Nothing changed when the 2015-2016 season came to an end.  Backstrom still has the fourth highest assists-per-game mark in the NHL over the last nine seasons.  What establishes him among the best playmakers in the league even more firmly is the fact that no player in the last nine seasons has more years with 50 or more assists than Backstrom (he, Sedin, Thornton, and Ryan Getzlaf each have six such seasons).

Backstrom is methodically moving up the all-time franchise rankings.  If he appears in 80 games this season he will move into ninth place in games played in franchise history (732, ten behind eighth-place Brooks Laich).  If he produces at his per-80 game pace this season he would finish with 20 goals, putting him in ninth place in Caps history (185, three behind eighth-place Bobby Carpenter).  With 59 assists at his career per-80 game pace he would add to his all-time Caps franchise-best and become the first Capital to hit the 500 career assist mark (he has 477, 36 in front of second-place Alex Ovechkin).

He has done all of this as a very durable player.  He missed 40 games of the 2011-2012 season with a concussion, but otherwise missed only 12 games in eight other seasons.  Six times in nine seasons he appeared in every regular season game.

Let’s get right to it cuz.  If the Caps are going to win a Cup, Backstrom has to be the straw to stir the drink, as much as Alex Ovechkin.  Last spring, Backstrom had points in five of the six Caps wins, and he had points in two of the six losses (compare that to 5-in-6 and 2-in-6 for Ovechkin).  There are elite centers that do not go to Stanley Cup finals, but teams that go to Stanley Cup finals do not often do so without an elite center.  Backstrom has to be that guy this year.

The Big Question… Does Backstrom have another level in him still?

Nicklas Backstrom scored a career-high 101 points in 2009-2010, his third in the NHL.  That was a product of a career-best 33 goals and a personal high of 68 assists.  In six seasons since, he has averaged nearly a point a game (384 points in 406 games), but he has not had more than 20 goals in any of those six seasons (last season), and he has not had more than 61 assists (2013-2014).  Whether he surpasses those totals could be dependent on who he centers.  He has centered Alex Ovechkin for most of his career, but with the emergence of Evgeny Kuznetsov, the Caps might have a “1” and “1A” center (take your pick which is which) as much as a first and second line center.  If “another level” would be welcome, it would be more in the postseason.  Last season offered a glimmer of hope in this area.  His 11 points in 12 games (two goals, nine assists) was the first time he finished a postseason in double digit points since he went 3-12-15 in 14 games in 2008-2009.

Perhaps as much as any player in the history of the franchise, Nicklas Backstrom personifies the characteristics of dependability and reliability.  But therein lies a paradox.  His is a position the team can count on for a certain level of production (15-20 goals, about a point per game).  His dependability and reliability allows the team (coaches and management) to devote more attention to other areas.  On the other hand, Backstrom’s consistency is hard to divorce from a different, broader consistency, the failure of the club to go deep into the postseason.  This is not to lay the blame for the Caps’ playoff misfortunes at Backstrom’s feet – such things are a team endeavor.  But there is at least a coincidental relationship of Backstrom doing “x,” and the team doing “y”…consistently.

Backstrom is among the best centers in the NHL.  Of this there can be no doubt, but can he be counted among an elite group that might include Sidney Crosby, Evgeni Malkin, and John Tavares?  The answer lies, in part, in the paradox of the perverse relationship of his consistent production and the team’s regularity in terms of results.  That level of production can be counted on, but it gets the team only so far.  If the Caps can count on Backstrom to hit certain marks in the regular and postseason, then in light of their disappointing playoff finishes, the club has to get better performances out of other players.  It might be reasonable to expect that sort of a result from Evgeny Kuznetsov and Andre Burakovsky, both of whom had underwhelming playoff performances last spring, but who remain very young players.  However, Nicklas Backstrom’s ability to accelerate that “private pace” and squeeze just a bit more out of his game could do wonders for the Caps’ postseason chances in 2016-2017.