The Peerless Prognosticator is ON THE AIR!!! -- Game 51: Flames at Capitals, February 1st

Bye-Bye “Bye Week.”  The Washington Capitals return to the ice on Friday night with no interest in picking up where they left off, aiming to end a seven-game losing streak  (0-5-2) when they host the Calgary Flames at Capital One Arena.

Since the 2013-2014 season, four defensemen have recorded at least 80 goals and at least 275 points.  Brent Burns, Erik Karlsson, Dustin Byfuglien, and Calgary’s Mark Giordano are the foursome.  Giordano might be the least known (not to mention appreciated) of the group.  This might be Giordano’s best season of his career.  His 11 goals does trail his career high of 21 substantially, but his 41 assists in 49 games is already a career best, and his 52 points are four short of the career high of 56 he posted in 2015-2016. His plus-29 leads all skaters going into Thursday’s games, and his 1.06 points per game lead all league defensemen.  Giordano leads all defensemen in three-point games this season with seven, three more than his closest competitors.  And when Giordano posts points, which is often, it matters.  Calgary is 21-5-3 in the 29 games in which he recorded a point, 11-7-2 in the 20 games in which he did not.  Giordano is 3-6-9, plus-2, in 13 career games against the Caps.

Calgary has been successful largely through filling the opponent’s net with pucks.  At the other end, goaltending has been an issue.  David Rittich is sixth in the league in save percentage (2.47) among 46 goalies with at least 1,000 minutes played and tenth in save percentage in that group (.918).  Those numbers have slipped since Christmas, though.  But his is an odd profile.  In ten starts since Christmas, Rittich had a goals against average of 2.77, almost a third of a goal per game higher than his season mark, and his .909 save percentage of .909 in that span is nine points lower than his season mark.  Nevertheless, he is 8-0-2 in those ten appearances.  Rittich has not lost a game in regulation since dropping a 2-0 decision to the Dallas Stars on December 18th.

Mike Smith has even worse numbers, not that they have been very good this season.  Overall, he ranks 35th of 46 goalies with 1,000 minutes in goals against average (3.04), and his save percentage of .888 is next to last in that group.  Since Christmas, though, Smith’s goals against average (3.26) has slipped, while his save percentage (.888) has shown no improvement.  Still, he is 3-1-0 in that span. 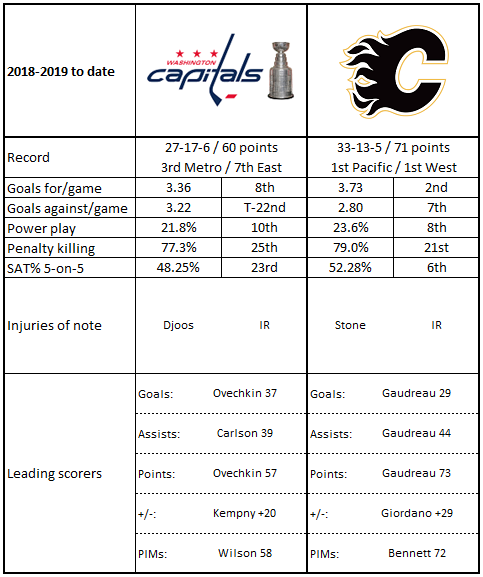 1.  Going into Thursday’s games, no team has scored more goals since Christmas than Calgary (63, tied with San Jose).  Their shooting percentage also leads the league in that span (14.6).

2.  Over that same period, no team has fewer credited hits than the Flames (186, 15 fewer than the Toronto Maple Leafs).

3.  The Flames can be loose with the puck.  Their 244 giveaways is most in the league since Christmas.  Then again, so is their 167 takeaways.  Scoring quirks?  Or Turnover-palooza in Calgary games?

4.  What Calgary has not been is an especially dominant team in shot attempts.  Since Christmas, their 49.64 percent in shot-attempts for at 5-on-5 ranks 17th in the league, although they are more impressive when behind (56.80 percent.sixth).  So, don’t sleep on this team with a lead.

5.  The Flames have not done a good job coloring within the lines.  Since Christmas, their 139 penalty minutes rank third in the league (tops among Western Conference teams), and they are the only club in that time to have been charged with a match penalty (Sam Bennett).

4.  No team has suffered more shorthanded instances on home ice than the Caps in their 17-game run. Their 60 shorthanded situations faced are two more than the Colorado Avalanche over that span.

5.  The Caps have eight goals scored in their last four home games.  They lost all of them, including the one game in which they scored six of those eight goals, a 7-6 overtime loss to San Jose in their most recent home game (January 22nd).

In his first ten seasons in the NHL, James Neal never posted fewer than 21 goals, and he recorded that total on only 40 games with Pittsburgh in 2012-2013.  He was among the better goal scorers over that decade, his 263 goals ranking 15th in that ten-year span.  But, he was expendable, having dressed for four different franchises over those ten years—Dallas, Pittsburgh, Nashville, and Vegas.  After spending one season with the Golden Knights in last year’s inaugural season, he signed a five-year/$28.75 million contract as a free agent with the Flames.  It has not worked out well.  He started cold (three goals in his first 14 games) and slipped into the deep freeze thereafter (two goals in his last 35 games).  With five goals in 49 games he will struggle to reach double digits in goals if he does not pick up his pace.  His ice time has slowly been pared back as a result.  He averaged 15:55 in ice time per game over his first ten games, dropping to 15:10 in his next ten, 15:07 in his third ten-game segment, 15:23 in his next ten, and 14:14 in his last nine contests going into Friday’s game in Washington.  And ice time seems to be an indicator of success.  Calgary is 12-8-3 in the 23 games in which Neal skated at least 15:50, 21-4-1 in the 26 games in which he skated less than 15:50.  Neal is 10-5-15, plus-4, in 21 career games against Washington.

Chandler Stephenson has yet to establish much of a footprint as an offensive player with the Caps.  In two full seasons with the club he has recorded 64 shots on goal in 113 games.  No player having appeared in at least 100 games over the last two seasons have fewer shots on goal (by way of comparison, even Brooks Orpik has 72 shots on goal in 103 games).  However, Stephenson does have 11 goals on those 64 shots for a respectable 17.2 shooting percentage.  It is not shooting that matters for Stephenson at this career juncture.  This season the Caps are 13-8-3 in the 24 games in which he recorded at least one shot on goal, 13-6-3 in the 22 games in which he did not.  Ice time matters, though, perhaps as an indirect indicator (the Caps perhaps able to roll lines in leading situations).  Washington is 8-3-0 when Stephenson skated more than 14 minutes, 14-9-4 when skating between 10 and 14 minutes, and 4-2-2 when skating under ten minutes.  Stephenson is looking for his first point against Calgary, going 0-0-0, even, in four career games against the Flames.

Calgary is a team that can make an opponent pay dearly for making defensive errors, but on the other hand, it is also a very top-heavy scoring team.  Of their 190 goals, 101 come from four players, all topping 20 goals (Johnny Gaudreau (29), Sean Monahan (27), Matthew Tkachuk (24), and Elias Lindholm (21)).  It is more balance than the Caps have, though, considering that Alex Ovechkin’s 37 goals represents 22.0 percent of the team’s total, and his 57 points means he has a hand in more than a third of the team’s 168 goals (33.9 percent).  Can the Caps slow down the Flames’ “Big Four” and get some goal scoring support of their own from other players (given Ovechkin's absence for this gaem)?  This is the fault line upon which this game could be decided.