The Peerless Prognosticator is ON THE AIR!!! -- Game 43: Canucks at Capitals, January 14th

The Washington Capitals have had three days without hockey, but on Thursday night it is time to get back to business as the Vancouver Canucks come to town.  The Caps will be looking to extend their current winning streak to five games and make it their fourth winning streak this season of five or more games.

The Canucks, on the other hand, will be looking to win consecutive games for the first time in almost three weeks and only the second time in more than a month.  Vancouver has been alternating wins and losses of late, going 4-2-1 in their last seven games that coincided with their longest home stand of the season.  This contest will open a six-game road trip that will take the Canucks almost to the all-star break.

The odd – and perhaps ominous – part of the Canucks’ 4-2-1 record over their last seven games is that three of the wins came in extra time (twice in overtime, once in the Gimmick).  Their offense has been almost non-existent over that span of games, registering a total of just 13 goals, only 11 in 21 regulation periods of hockey.  It makes the 17 goals they allowed over those seven games – a very respectable number – look worse than they are.

Of the 13 goals scored over their last seven games, four of them were recorded by Bo Horvat.  The sudden jolt in his goal totals came in the midst of what has been a disappointing sophomore season for him in that statistic.  Horvat finished tied for seventh among rookies in goals scored last season (13), but he had just two in his first 39 contests this season until his recent production.  What he cannot hide, though, is that among 785 skaters to have dressed so far this season, he is ranked tied for dead last in plus-minus (minus-20).  Horvat has one assist in two career games against the Capitals.

Henrik Sedin leads the team over this stretch in assists with four, but he has not turned on the red light himself.  It is part of a first half that has him on a somewhat spooky pace of 18-54-72, almost precisely what he finished with in 82 games last season (18-55-73).  The goal scoring might be something of a concern, however, given the team’s recent drought.  Henrik does not have a goal in his last 12 games and only one in his last 17 contests.  He is primarily a set-up man, and he does have 12 assists over those same last 17 games.  But with the club averaging less than two goals per game over their last seven games, and the team generally underperforming on offense (ranked 15th), more would be helpful from Henrik.  He is 3-10-13, plus-3, in 16 career games against Washington.

Ben Hutton is the only defenseman in the Western Conference who has ten or more assists and no goals (0-10-10).  The 22-year old rookie out of Brockville, Ontario, was a fifth-round pick of the Canucks in the 2012 draft, after which he spent three years in the University of Maine program in the NCAA.  Four games in the AHL later, at the end of last season, and he is a Canuck, one of three Vancouver defensemen to have recorded ten or more points this season.  What he is not at the moment is hot.  After posting nine points (all assists) in his first 22 games, he has one point (an assist) in his last 14 contests.  He has one career appearance against the Caps, that in Washington’s 3-2 win in Vancouver on October 22nd, without a point and registering a minus-1.

Here is how the teams compare to one another overall: 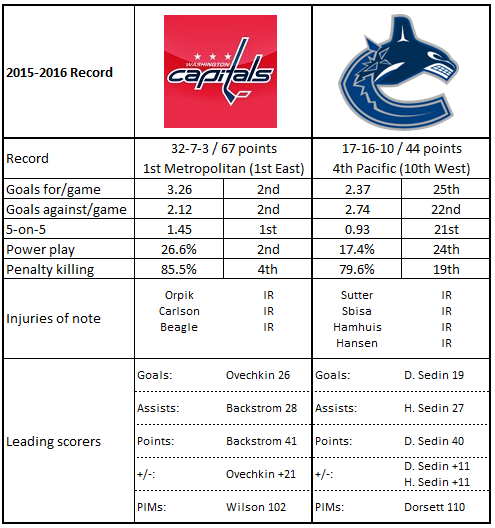 1.  Vancouver’s recent road record is nothing to get excited about, if you are a Canuck fan.  They are 2-4-3 in their last nine road contests, and one of the two wins came in the freestyle competition.  They were shut out in three of the four regulation losses.

2.  Ryan Miller has missed the Canucks’ last eight games in goal with a groin injury suffered on December 20th in the shootout phase of Vancouver’s 5-4 loss to Florida.  In his place, Jacob Markstrom went 5-2-2 (he took the shootout loss when Miller departed against Florida), 2.18, .927.  Miller is expected to return to action against the Caps.

3.  For what it’s worth, Vancouver is the worst team in the league taking faceoffs (45.2 percent).  What could spell doom for the Canucks is that they are last in faceoffs when shorthanded, winning an anemic 39.7 percent of their draws.

4.  Speak of penalty killing, Vancouver has faced the third highest number of shorthanded situations on the road this season (83), behind only Winnipeg (92) and Columbus (103).  Only the Blue Jackets have allowed more power play goals on the road (23) than the Canucks (20).

5.  Vancouver is a middle of the road team on the road in possession numbers.  They rank 15th overall in Corsi-for at 5-on-5 in away games (48.8 percent).   Looping back to those last nine road games in which they are 2-4-3, the Canucks are slightly below their season numbers (47.8 percent; numbers from war-on-ice.com).

1.  Did you know that “defense-first” head coach Barry Trotz has been behind the bench for four games in which the Caps scored seven goals over the past two years (all this season).  No team over the last two seasons has more seven-or-more goal games (Nashville and Ottawa each have four).

2.  Of those four seven-goal games, the Caps had two of them at home (against Ottawa and Colorado) and two on the road (at Edmonton and at the New York Rangers).

5.  Washington is 15th in the league in Corsi-for at 5-on-5 on home ice (51.8).  Despite the fact that the Caps bring a ten-game winning streak on home ice into this game, their Corsi numbers have been a bit lower than their season numbers at Verizon Center (49.8 percent; numbers from war-on-ice.com).

When a hockey hall of famer refers to you on-air as a “lowlife,” people will take notice.  That is how Daniel Sedin was described by Florida Panthers TV analyst and hall of famer Denis Potvin after Sedin scored the game winning goal in overtime to end the Panthers’ 12-game winning streak.  There were also references to dining habits. For Sedin it was just another night at the office (two goals) in a season that has him averaging almost a point a game (40 in 43 games) and that has him within a goal (19) of the total he had last year in 82 games (20).

Nicklas Backstrom has four three-or-more point games this season.  Not a surprise.  So does Evgeny Kuznetsov.  We can see that.  Next in line, with three three-or-more point games is Jason Chimera, who has three (at home against Colorado and Ottawa, and on the road against Philadelphia). He did not have one all of last season.  Shoot, even Curis Glencross had one, and he was here and gone in the blink of an eye.  Jay Beagle had one, for heaven’s sake.

Chimera is on a bit of a run lately.  After suffering a five-game streak without a point in December, he is 5-6-11, plus-9, over his last 14 games.  His next power play point will make him the sixth Capital to reach ten power play points this season.  They had nine players reach that mark last year, and Chimera was not one of them.  He had none in 77 games, in fact.  He is 9-5-14, minus-3, in 31 career games against Vancouver.

On the other hand, the Caps have done well against the Pacific Division.  However, while they are 4-1-1 overall against the Pacific, they are just 1-1-1 on home ice.  This is a game that can turn on special teams.  Vancouver is a respectable plus-5 in 5-on-5 goal differential in away games (ninth in the league), while the Caps are sixth in home goal differential at 5-on-5 (plus-11).  The Caps’ power play (ranked second in the league at home) against the Canucks’ penalty killers (ranked 23rd on the road) heavily favors Washington.  That is where the Caps will win.