The Peerless Prognosticator is ON THE AIR!!! -- Game 77: Capitals at Devils, April 4th

The Washington Capitals head up I-95 on Friday to visit Newark, NJ, and the New Jersey Devils in what is a “must win game” for both teams.  The winner of this game can keep within sight of the Columbus Blue Jackets in the race for a wild card spot in the playoffs.  The loser?  With five games to play after this one and four points out of the wild card (Washington) or five (New Jersey) in the event of a regulation loss and not holding a favorable tie-breaker position, the loser can schedule its exit meetings with players and start scheduling other events for their arena for the rest of April.

The Devils come into this game as a team without a direction.  The are 8-6-3 in their last 17 games since the Olympic break.  They have not won more than two games in a row in that span and have not won consecutive games since March 8th and 11th.  They do have a three-game losing streak in there and a two-game streak of losing in extra time.

Scoring has not been a problem for the Devils over that span.  They are averaging 3.00 goals per game over those 17 games, although they have struggled a bit with consistency.  Four times in that span the Devils scored five or more goals (take note, three of them at home), while on the other hand they have been held to two or fewer goals eight times and been shut out twice.

One player to pay particular attention to in assessing whether the Devils are hot or cold is Adam Henrique.  Over his first six games coming out of the Olympic break, Henrique recorded nine goals, more than a third of his season total (25).  The Devils were 4-2-0 in those games.  In 11 games since he has only two goals, and New Jersey is 4-4-3.

More consistent production has come from Patrik Elias.  Since the Olympic break the 18-year veteran is 6-12-18.  What might of some concern here is that he is without a point in each of his last two games – against Florida and Buffalo, no less – the first time he has gone consecutive games without a point since February 7th/8th.

The Devils have three defensemen with at least 25 points this season.  You might be familiar with Marek Zidlicky and Andy Greene as being two of them.  But Eric Gelinas?  The 22-year old second round draft pick from 2009 is 7-21-28 in only 57 games.  However, he is another Devil who came out of the chute fast after the Olympics (1-3-4 in his first three games), but who has cooled off considerably lately (0-1-1 in his last six games and 0-2-2 in his last ten contests.

The situation in goal for the Devils is, one might say, “fluid.”  Neither Martin Brodeur nor Cory Schneider have started more than two games in a row since the Olympic break.  Neither has been especially effective, although inconsistent might be the more accurate term.  Brodeur is 5-3-1 in nine appearances with a 2.60 goals-against average and a .905 save percentage.  Schneider is 3-3-2 in nine appearances, with a 2.87 GAA and a .876 save percentage. 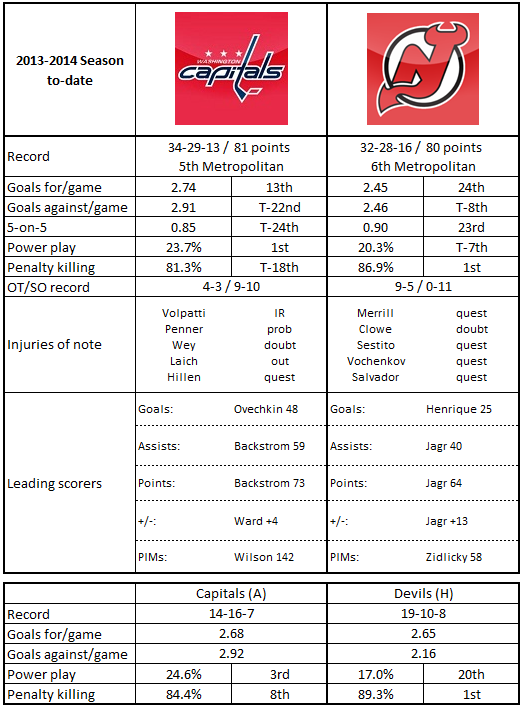 1.  Getting started is an issue for the Devils.  Only five teams have few first period goals.  However, only the Boston Bruins have allowed fewer first period goals, making the Devils third in the league in taking leads into the first intermission (31 times).

2.  New Jersey could be on the brink of a record-setting season, and not in a good way.  Since the introduction of the shootout in 2005-2006, only three teams have gone an entire season without winning in the skills competition.  Carolina went 0-5 in 2005-2006, and Calgary (0-3) and Toronto (0-5) went winless last season.  The Devils are 0-11 in the freestyle phase this season.  They have only three goals this season, and one of those players – Reid Boucher – is not with the club.  Jacob Josefson and Jaromir Jagr are the others.  In addition to the league’s worst shooting percentage (7.7), they have the second worst save percentage in this phase (.553).

5.  The Devils are, however a superior possession team (note: if you have the puck, you don’t have to hit or block shots).  New Jersey ranks fifth in the league in Fenwick-for percentage in 5-on-5 close score situations (53.8) and fourth in Corsi-for percentage (54.6).

1.  Since the Olympic break the Caps are 7-6-4, but carry a four-game losing streak into this game (0-2-2) and losses in five of their last six contests (1-2-3), all of the extra time losses coming in the freestyle competition.

4.  That leaves even strength.  Only four teams have fewer 5-on-5 goals this season than the Caps (126): Edmonton, Montreal, New Jersey, and Buffalo.  Only nine have allowed more 5-on-5 goals than Washington (149).  It is not a recipe for sustained success.

5.  The Caps are standing on seven straight games with Corsi-for and Fenwick-for percentages under 50 percent in close score situations.  It should not be surprising that the Caps have recorded only 42.3 percent of the shots on goal in those situations over the seven games and have been outscored, 11-4.

1.  Eyes front.  Scoreboard watching does nothing now.  The Caps can only tend to their business.  Win here, win out, and see what happens.

In the movie, “Remember the Titans,” that is what injured All-American linebacker Gerry Bertier said to Coach Bill Yoast when he was in a hospital bed.  This is, of course, not nearly as serious as a young man paralyzed in a car accident, but the Capitals, with respect to their playoff hopes “are hurt….they ain’t dead.”  And until they are, there is something to play for.