You Make the Call

The NHL is allegedly cracking down (again) on head shots.  Well, does this action by the Atlanta Thrashers' Colby Armstrong qualify? 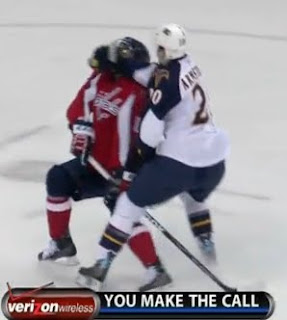 The new rule against head-hunting emphasizes a prohibition on "“lateral, back-pressure or blindside hit to an opponent where the head is targeted and/or the principal point of contact.” Under a strict reading of that language, the rule might not apply here. Mathieu Perreault and Armstrong meet, more or less, face to face (or as this screen capture from the Comcast Sports Net feed suggests, elbow to face). No "lateral, back-pressure, or blindside" occurrence in evidence there.

But actively thrusting an elbow at the head of an opponent is covered under other rules. Rule 46.1 defines elbowing as "the use of an extended elbow in a manner that may or may not cause injury."

Further, Rule 46.3 gives the referee the discretion to call a major penalty on "any player or goalkeeper who uses his elbow to foul an opponent. A major penalty must be imposed under this rule for a foul resulting in an injury to the face or head of an opponent."

Rule 46.4 allows for further penalty: "The Referee, at his discretion, may assess a match penalty if, in his judgment, the player or goalkeeper attempted to or deliberately injured his opponent by elbowing."

Whether Armstrong could be cited under rules for the maximum treatment here under Rule 46.4 is doubtful (a lot of Caps fans would say "yes," Thrasher fans would disagree). But it is a no brainer that Rule 46.1 applies, and certainly given the enthusiastic manner in which Armstrong applied his elbow to the jaw of Perreault, the referee's discretion to call a major penalty cannot be discounted... if you're really in the business of trying to stop head shots.

However, no penalty was called on the play. And, Armstrong is not a "repeat offender." Despite a reputation for sharp elbows, he has no record (at least in any search we did) of suspension by the league.

Will Armstrong miss time over this? We're betting on "no." Why?  Well, it's in what Armstrong had to say about the play...

Pereault ducking out of the way is not the action to which a penalty can be applied.  The issue is Armstrong and his elbow.  All Perreault's actions did was to enable him to avoid what might have been serious injury as a result of that elbow.  If the league decides not to give Armstrong a vacation, you can decide for yourself if the league is serious about eliminating head shots on the ice or just writing rules for the sake of appearing to do something about the problem.
Posted by The Peerless at 8:12 AM 11 comments: 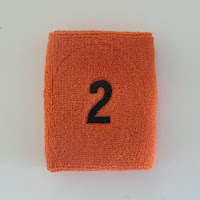 You have to walk before you can run, and that was the case as the Capitals took down the Atlanta Thrashers last night, 2-1. It wasn’t a stylish game by any stretch of the imagination, but it was a win – one performed in a workmanlike fashion that was absent during the three-game losing streak that ended with this game.

Semyon Varlamov probably helped himself more than any other Capital did in this one, making coach Bruce Boudreau’s decision just a little bit harder to make as to who to start in Game 1 of the playoffs in a couple of weeks. Varlamov stopped 19 of 20 shots, and even on the one that got through there was a breakdown in defensive coverage that allowed Tim Stapleton to break free alone down the middle for a scoring chance.

Although there was that breakdown, it is hard to argue overall with an effort that allowed the Thrashers to produce only 20 shots on goal and only 52 shot attempts (the Caps had fewer, if you can believe that – 48). It was a game that was hard to watch and for long stretches resembled more a game you might have seen in the NHL of 2003, not 2010 – a lot of skating back and forth to little productive purpose.

- Nicklas Backstrom reached 30 goals to give the Caps three 30-goal scorers, the second consecutive year (and third in four seasons) it has happened. Mike Knuble has an outside shot at making it four (he has 26). The Caps have not had four 30-goal scorers since the 1985-1986 season (no, we are not counting the full-year totals of late season pick up Dino Ciccarelli in 1989).

- 50 wins ties a franchise record. With five games left, the Caps have a chance to tie or surpass the league-high win total of last year (53, Boston and San Jose), but the post-lockout record of 58 wins (Detroit, 2006) is out of reach.

- Last season, five clubs hit the 50-win plateau, the Caps being one of them. This year, it is possible that the Caps finish as the only club to do so (they are almost certain to be the only club in the East to do it). San Jose, Chicago, and Phoenix have 47 wins, all with five or fewer games left to play.

- Good things happen in the Bradley Corner. Beating Chris Chelios to a loose puck deep in the corner, shrugging Chelios off, walking down the goal line, and stuffing the puck under goalie Ondrej Pavelec, it was a power move that just hadn’t been a part of Bradley’s game lately. I broke a 25-game streak without a goal, dating back to January 19th against Detroit.

- Chelios explained it this way… ““I didn’t see [Jason] Chimera coming down the boards, and me and [Max Afinogenov] got caught on the same guy. I never even saw Bradley coming. It’s unfortunate. It was a miscommunication.” Didn’t see Chimera, didn’t see Bradley. The eyesight tends to go at his age.

- It’s hard to score without the puck, especially when you start plays losing it. The Caps won 11 of 17 defensive zone draws (David Steckel was 7 for 8).

- Brooks Laich might not have looked especially stylish in his cage, but he killed penalties (1:24 in PK time and a shot while shorthanded, although that was a long-distance one), managed a couple of shots from in close, and had a hit and a blocked shot for good measure.

- Maybe it’s hometown scoring, but the six defensemen for the Caps were credited with but a single giveaway (John Erskine). Makes a goalie happy, that.

- Eric Fehr had what might be called an “interesting” game. In nine minutes and change he had no points, no shots, no shot attempts, no hits, no giveaways, no takeaways, no blocked shots, did not take a faceoff, and neither a goal nor a penalty happened when he was on the ice. A score sheet doesn’t get any cleaner than that.

- One power play for the Caps, three for the Thrashers. Not sure if that was a product of the style in which the game was played or if Dennis LaRue and Justin St. Pierre had their playoff whistles in use.

- With an assist, Mike Green tied his career-best point total of last year (73). He remains the only defenseman in the league averaging more than a point a game (1.01), he leads all defensemen in both goals and assists, and as a practical matter the only difference between this year and last year is the consecutive goals streak he put together last year. As fashionable as it is in a lot of corners of the hockey media to trash his game, a guy who has 49 goals, 146 points, and is a plus-59 over 140 games covering two seasons is playing pretty damned well.

- You could say Alex Ovechkin is in a “slump,” but with an assist last night, that makes for points in three straight games, five of six, and eight of ten. When pitchers don’t have their “stuff” in baseball, the really good ones find a way to grind out wins. Ovechkin doesn’t have his “stuff,” but he’s still grinding out points. Now, if only that Sedin guy would stop…

- Something to watch for Saturday… Tomas Fleischmann skated only 9:52 in this one, his lowest ice time number of the season. He had two shots on goal in 11 shifts (his only shots on goal over the last three games). Does he take a seat against Columbus on Saturday?

In the end, a win is a win is a win. Forget that it is “just” Atlanta. That is a team that is achingly close to a playoff spot, three teams sitting only two points ahead of them. They are the epitome of the desperate team. This was a good win and a good way to break out of the doldrums of a three-game losing streak. Now it’s on the road to Columbus where they can make it two in a row. As the legendary manager Lou Brown once said, “that’s called a winning streak. It has happened before.”
Posted by The Peerless at 6:55 AM No comments: