Over at ESPN.com, Pierre LeBrun takes a look at how teams have done in the second half of the year (meaning, the second 41-games). It's an interesting little piece, but we don't think it goes far enough in what it means. First, let's break those standings down by conference. Teams in yellow are in their respective top-eight: 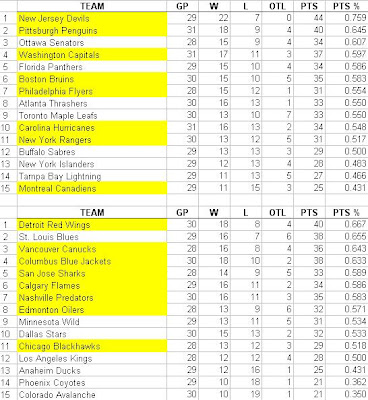 You can see that Montreal in the East is really sucking wind at this point, the worst team in the Conference in the second half of the season. Over in the west, you have to think the youngsters in Chicago have hit a wall. Parenthetically, the high-water mark of the Blackhawk season might have been the Winter Classic. Going into the home and home with Detroit that ended in the outdoor game, Chicago had a .712 winning percentage going into those games (20-6-7). They haven’t been that high since losing both games to Detroit.

But back to this second half thing. If you look at that spiffy color coded table, you can see that the West has followed comparatively true, first half and second, reflected in the fact that seven of the top-eight second half performers are also still in the playoff mix. Only those Blackhawks have fallen out. If you look at potential playoff seedings, as in “if the playoffs started today,” the West would look like this (second half ranking in parentheses):

Looking at those matchups, one might think Chicago is set up for a quick and quiet exit. They are slumping, and despite being a current #5 seed in the West, they would face a #4 seed that is actually playing higher than their seed indicated (Vancouver is third in the West in it second half record). Similarly, Calgary – the #3 seed at the moment – could be primed to be “upset” by the Blue Jackets – the #6 seed – based on their respective second half records. San Jose and Edmonton are both playing worse than their current seeds, while Detroit and Nashville have second half records that might be closest to their respective seeds (not good news for Nashville).

Things are more interesting in the East, where there is a real jumble. Ottawa, Atlanta, and Toronto are also-rans in the full-year standings, but which have pushed themselves up the charts in the second half. In addition to the Canadiens’ fall from grace, you’d have to be very concerned about the Hurricanes and the Rangers, their most recent records (6-2-2 and 6-3-1, respectively, in their last ten games) notwithstanding. The potential matchups would look like this (second half ranking in parentheses):

Clearly, you don’t want to be that team facing either Pittsburgh or New Jersey in the first round. Both teams are playing far above their full-year winning percentage levels. Philly and New York are in the potential bulls-eye there, and given their second half performances, you might not like their chances. Boston and Carolina looks like it might be a war of attrition or an aesthetic disaster, given their respective second half performances. And if you’re a Caps fan, you might be fairly drooling over the prospect of getting the Canadiens in the first round.
Posted by The Peerless at 12:17 PM 4 comments: 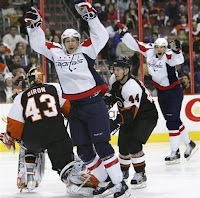 Last night, Quintin Laing skated the last shift of the Caps' 5-2 win over Tampa Bay.
This morning, news came out that he tore his spleen and will be out for the season.
Laing, with his disregard-for-self penchant for throwing himself in front of shots, has impressed us as one of those guys who might always struggle to make an NHL roster, but who is really good to have in your system as an example of hard work and grit to other guys.
He is in the last year of his contract, so this might have been his last game as a Capital. We sure hope not. He's an inspiration.
Posted by The Peerless at 10:09 AM No comments:

Somewhere, Don Cherry is getting CPR.

Alex Ovechkin scored his 50th goal of the season last night in the Capitals’ 5-2 win over the Tampa Bay Lightning, joining Wayne Gretzky and Mike Bossy as players to score 50 or more in three of their first four seasons. But it will be the aftermath that folks will be talking about. After stepping around Matt Pettinger at the Tampa Bay blue line and shooting around Lukas Krajicek and over goalie Mike McKenna’s glove to notch the 50th, Ovechkin laid his stick down in the corner and pantomimed warming himself from the heat of his hot stick.

It was not Ovechkin’s finest moment.

The one thing about Ovechkin’s goal celebrations – those resulting from his own and from teammates’ goals – has been their air of spontaneity. It is what sets his apart from those of touchdown-scorers and sack-masters in the NFL, where everything looks choreographed. They are even different from those in the soccer celebrations Don Cherry famously compared Ovechkin to in that the soccer celebrations have more than their own whiff of shirt discarding choreography to them.

That’s what makes this so disappointing. Ovechkin had been – to this moment – unique, despite Cherry’s rantings. But even Mike Green, who was invited to participate in this theater, declined – “He told me he was going to do it. He wanted me to join in, but there was no way I'd join in on that. I just kind of stood back and let him do what he does."

If one wants to chalk this up to a certain exuberance on the part of a 23-year old setting the bar a little higher on his career achievement track, fine. We can see giving the guy a pass (there are a lot of folks this morning, though, who won’t). But frankly, this one crossed the line. We’re hoping we don’t see anything like it again.

While Ovechkin was blistering his fingers from the heat of his stick, Mike Green was inching in on a milestone of his own. His two goals gave him 27 for the year. Having reached this mark in 59 games, you’d have to like his chances to get to 30. If he does, he would become the eighth defenseman in league history to reach that mark. It hasn’t been done since the 1992-1993 season, when Capitals’ defenseman Kevin Hatcher netted 34.

It was the first time this season that the Caps failed to score three goals on the Lightning in the first period. They scored two.

Perhaps lost in this was Viktor Kozlov’s getting three assists. It was his first three-point game since December 18th (St. Louis).

And Shaone Morrisonn had a couple of assists. It was his first multi-point game of the year and his first since March 10, 2007 (New York Islanders).

18:43…that was Brian Pothier’s ice time. Any other considerations of statistics in his game are irrelevant.

With Boyd Gordon out, the other guys did pretty well in the dot…Backstrom, Sergei Fedorov, and David Steckel were a combined 26 up and 12 down (68.4%).

Mike Green led the Caps in hit in this one (four).

Matt Smaby had a tough game for the Lightning. He was on the ice for each of the Caps’ even strength goals.

Once more, every Cap got at least ten minutes of ice time; only three had more than 20.

Marty St. Louis gets the score sheet splatterage award…a goal, three shots, a shot blocked, a shot missed, a hit, a giveaway, a takeaway, a blocked shot, and he lost a faceoff. That’s the Sampler Platter at Red Lobster.

Rick Tocchet made good on his promise to Matt Lashoff, and Lashoff fulfilled it. Lashoff led the Lightning in ice time and in power play ice time. The Lightning did get a power play goal (Steven Stamkos) and Lashoff had a pair of assists.

Since the Caps lost in regulation at Ottawa on January 20th, they are 8-1-2 on the road.

Boston is 3-5-1 in March. Two of their next three are against New Jersey and at Philadelphia. Maybe catching them isn’t impossible after all.

Jersey has the gauntlet of playing Minnesota, at Boston, at Philadelphia, at Chicago, Carolina, and at the Rangers (where Sean Avery can torment “Fatso”) in their next half dozen. Maybe holding them off isn’t impossible either.

With only nine games left, and only one of those against a team in the top-eight in the East, the struggle now is to stave off boredom. But now, the Capitals have some incentive to push through – they can finish at the head of the class in the East. It doesn’t have the same urgency as last year’s finish, but it could be interesting nonetheless.

In the meantime, this was pretty good, guys…except for that stick thing.
Posted by The Peerless at 6:45 AM 9 comments: