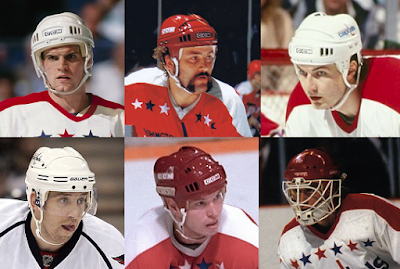 Our look back at the All-alphabet Team for the Washington Capitals reaches the half-way point in the alphabet with All-Team M.  When we published the original squad in 2014, the roster was:

This is a team that had something for everyone.  There was the plucky, hard-working winger who combined timely offense with strong defense (Miller), one of the most prolific goal scorers in Caps history (Maruk), the very epitome of “truculence (May),” the “stay-at-home” defenseman (Morrisonn), the “offensive” defenseman (Murphy), and, what makes this a truly Caps club, the young goalie upon whom fate looked unkindly in the biggest moment (Mason).

This is another squad dominated by players arriving in DC from elsewhere.  Miller was drafted by the New York Rangers before being traded to the Caps.  Maruk was drafted by the California Golden Seals, the first of three teams for whom he would play before coming to Washington.  May was an undrafted free agent signing by the Boston Bruins before going to Edmonton and then Los Angeles before becoming a Capital.  Morrisonn was a first round draft pick of the Boston Bruins before he was traded to the Caps. Murphy was likewise a first round pick, then of the Los Angeles Kings before he was traded to Washington.

Despite their coming to the Caps from other places, the skaters do have a considerable body of work with the Caps.  All five skaters dressed for more regular season games with the Caps than did for any other team for which they played.  Combined, the five skaters total 2,458 regular season games, and account for 466 goals and 1,315 points.  When Maruk posted 60 goals in 1981-1982 for the Caps he became the first player in team history to accomplish the feat and the seventh to do it at least once in NHL history.

When Murphy was traded by the Caps to the Minnesota North Stars in 1989, he left as the second-leading point-getter among defensemen in team history (345, trailing only Scott Stevens (389)).

Even Morrisonn, who might be the least renowned of this group, had one third of the nine goals he scored as a Capital be game-winners.

In goal, Bob Mason had a brief career with the Caps (five years, 76 regular season and four postseason games after being signed as an undrafted free agent in 1984), but he might be the first tragic figure in the Caps’ long journey of postseason frustration.  Here was a goalie who pitched a shutout in his first playoff appearance, a 26-save effort in a 2-0 win over the New York Islanders in Game 3 of the 1987 Patrick Division semi-final.  He followed that up the next night by stopping 25 of 26 shots in a 4-1 win over the Isles in Game 4 of that series to give the Caps a 3-1 series lead.  Both of those wins came on the road.  Pete Peeters, who started Games 1 and 2 at home, got the call in Game 5 and lost, gave way to Mason once more on the road in Game 6.  It did not go well, the Caps losing, 5-4, to force a Game 7 in Washington.  It was an epic.  On Easter.  An “Easter Epic,” if you will.  Despite making 54 saves on 56 shots in more than 128 minutes and into a fourth overtime, it was the 57th shot that eluded him, a Pat LaFontaine shot that clanged off the post to Mason’s left and in to send the Caps into the night, disappointed.

But back to the business at hand.  If you are thinking of replacements on All-Team M among players to dress for the Caps since this team was published in 2014, you do not have much from which to pick.  Only two skaters have dressed for the Caps since then whose last names begin with the letter “M” – forwards Beck Malenstyn and Garrett Mitchell.  Between them they have four games played, no points, and both averaged less than ten minutes of ice time in their brief stays with the club.  Neither make an argument to crack this lineup.

So, All-Team M is another team that remains intact from its original release in 2014.  It is among the most versatile of teams with players that bring their own unique gifts to the ice to a degree that both individually and as a group is uncommon among the alphabet teams.  And perhaps with this group, Bob Mason might not have to endure in goal the disappointment of his “epic” night in Caps history.