The Peerless Prognosticator is ON THE AIR!!! -- Game 11: Capitals at Rangers, November 3rd

The Washington Capitals return to the ice on Tuesday night, visiting an old and familiar enemy.  The Caps invade Madison Square Garden to take on the New York Rangers, a team that has ended the Caps’ playoff journey in each of the last three times the Caps reached the postseason.  It has not exactly been a cake walk for the Caps in the regular season, either.  Washington has lost four of their last five regular season contests to the Rangers and have a 6-11-1 record in their last 18 regular season meetings with the Blueshirts.

The Caps and Rangers will head into their contest in a standings points tie for the top spot in the Metropolitan Division, the Caps holding the edge by virtue of holding a game in hand and one more win.  Both clubs will bring two-game winning streaks into the contest.

The Rangers have had a bit longer string of good play, going 4-0-1 in their last five games after starting the season alternating three-game winning and losing streaks. The streak featured one of the stranger games in terms of scoring that you will find.  In the Rangers’ last outing, a 3-1 win over the Toronto Maple Leafs, all three goals featured the same players in the same scoring roles.  Mat Zuccarello recorded a hat trick, Derick Brassard had all three primary assists, and Rick Nash had all three secondary assists.

Overall, the Rangers on this recent 4-0-1 run are led in overall scoring by Zuccarello (4-2-6) and Brassard (2-4-6), who also happen to be the team leaders overall in points.  Zuccarello, an undrafted free agent, has been on the brink of being a reliable goal scoring contributor for the past two seasons, posting 34 goals in 155 games overall.  This season he is off to a fast start in that regard with seven goals in 11 games.  He is doing it with an efficient that seems unlikely to stand up over time, shooting at 28 percent (7-for-25).  That is the effect of a hat trick in a small population of games.  In 10 career games against the Caps he has yet to record a goal, going 0-4-4, plus-4.

Brassard comes into this contest on a three-game points streak and points in four of five games.  Once a sixth-verall draft pick of the Columbus Blue Jackets, Brassard has yet to reach the level of performance one might have expected from such a high draft pick.  In nine seasons entering this one, Brassard has come close to the 20-goal mark for a season, but has not quite reached it.  He set a career best of 19 goals last season.  What he has been is more productive in the post season, recording 17 goals in only 54 career playoff games.  He is 2-6-8, plus-3, in 14 career games against Washington.

The Rangers have points from six of the seven defensemen to dress for the club so far this season, led by the six points posted by Keith Yandle.  Yandle has always been a top-notch offensive defenseman.  Since he became a full-time player in the NHL in 2008-2009, only Duncan Keith (333) and Shea Weber (328) have recorded more points among defensemen than Yandle (314, tied with Erik Karlsson).  He is one of only two defensemen – Karlsson and P.K. Subban being the others – to record at least 50 points in each of the last two seasons.  In 11 career games against the Caps, Yandle is 0-7-7, plus-1.

Henrik Lundqvist just keeps on going in goal for the Rangers.  In the early going this season he is in the top ten among goalies in wins (5/tied for 10th), goals against average (1.87/4th among goalies appearing in five or more games), save percentage (.944/1st), and total minutes played (546/ninth).  Only once in nine appearances this season has he allowed more than two goals, and only twice has he finished a game with a save percentage lower than .935.  If there is a weakness, it is in that he ranks 12th among goaltenders appearing in at least five games in save percentage in shorthanded situations (.895).  In 29 career regular season games against Washington, Lundqvist is 18-8-3, 2.52, .910, with four shutouts.

Here is how the teams compare in their numbers: 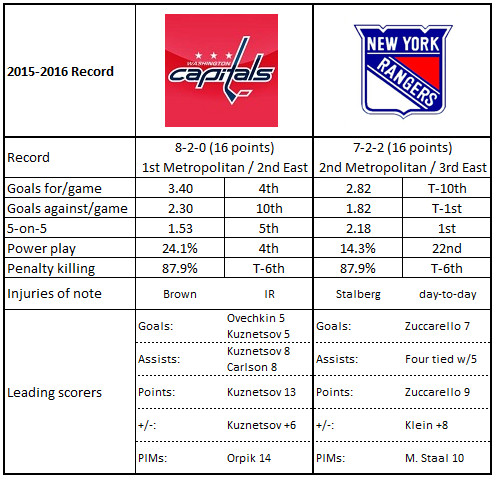 1.  The Rangers are a top-ten offense (going into Monday’s games), but they are a bit unbalanced.  Of their 31 goals, 12 of them come from Mats Zuccarello (7) and Oscar Lindberg (5).  No other Ranger has more than three, and Rick Nash, who led the club with 42 goals last season, has only one in 11 games so far.

2.  If you look at the Rangers’ scoring as a glass half full, they start and end games well.  With 12 goals in the first periods of games, they rank fourth; their 13 third period goals is tied for sixth.

3.  In the glass half-empty version of this, the Rangers do not handle the long change well.  Only the Columbus Blue Jackets and Anaheim Ducks (three goals each) have fewer second period goals than the Rangers (six).

4.  Allowing goals by period has not been a problem.  The Rangers and the Pittsburgh Penguins are the only teams in the league to have allowed eight or fewer goals in each of the three periods to date.

1.  T.J. Oshie and Justin Williams have not been resting on their contracts or past performance.  Both have eight points in 10 games.  Oshie is tied for third in goals overall (4) second on the team with four power play points.  Williams is fourth in assists (6) and third in plus-minus (plus-5).

2.  John Carlson leads the club in power play points (5).  Then there is Oshie, Nicklas Backstrom, Evgeny Kuznetsov…. You will find Alex Ovechkin tied for fifth on the club with one power play point in nine games, and that one is an assist.

4.  Brooks Laich has gon 15 consecutive regular season games without a point, his longest streak since opening the 2006-2007 with a 16-game streak without a point.

Chris Kreider seems to be the Ranger every Caps fan loves to hate.  Maybe it is a penchant for crowding goalies...

Or maybe it’s scoring big goals against the Caps (he had four in last spring’s seven game series).  Whatever, he is a player to whom Caps fans pay attention in this rivalry.  He comes into this game empty of points in two straight after putting together a three-game points streak.  What he is off to this season, though, is a slow start, goal-scoring wise.  Where he finished last season with a career-high 21 goals in 80 games, Kreider has only one goal in 11 games this season.  He does seem to be a bit more mindful of where he is on the ice though; he has only four penalty minutes this season after finishing last season with 88 penalty minutes in 80 games.  In eight regular season games against the Caps in his career, Kreider has one point – an assist. – and is plus-1.

It is early, but through ten games Tom Wilson is averaging about as many shots per game (1.20) as he did last season in 67 games (1.18).  On one level this is a bit troubling, since he is averaging almost three minutes more in ice time per game (13:39 versus 10:56 last season).  On the other hand, he is expanding his role.  Last season he finished the year with a total of 46 seconds of shorthanded ice time.  Thus far this season he is averaging 1:00 per game, seventh among forwards.  What he is getting as welol is more even strength ice time.  His 12:38 a game is almost equal to that for Justin Williams, for example (12:48).  With 159 games of regular season experience on his resume, it would be a good thing if the offensive production numbers started catching up with other parts of his game.  Wilson does not have a point in six career regular season games against the Rangers.

In the 1980’s, the defining rivalry with the Caps was that against the New York Islanders.  In the 1990’s into the early 2000’s, it was the Pittsburgh Penguins.  Now, a case can be made that it is the Rangers that are the Capitals’ archrival.  All three rivalries were the product of postseason confrontations more than regular season battles, but from one carries over the other.  The Rangers have had their way with the Caps in recent years, in games that really mattered and a few that did not.  The common element in those frustrations has been the play of goalie Henrik Lundqvist.  All paths to victory in this game go through the veteran netminder…literally.