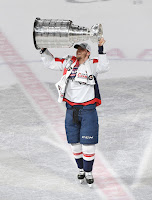 “The secret of success is to be ready when your opportunity comes.”
-- Benjamin Disraeli

A “journeyman” in sports is that player who is reliable, who can fill in when needed, but rarely has the skill set to have a guaranteed spot in the lineup or is assured of a long tenure in one locale.  It speaks to the need for a certain opportunism needed for when chances present themselves.

Alex Chiasson is a “journeyman” with the noble underpinnings the term implies.  A second round draft pick of the Dallas Stars in 2009, when he signed with the Caps as a free agency just before the start of the 2017-2018 season, he was joining his fourth franchise in six NHL seasons (Ottawa and Calgary being stops on the way between Dallas and Washington).  He came to the Caps on his third one-year contract in three seasons with diminishing levels of compensation ($1.2 million with Ottawa in 2015-2016, $800,000 with Calgary in 2016-2017, and $660,000 with the Caps for this season after being brought in on a professional try-out in early September).  You could say he had incentive, a 27-year old looking for some stability in his career, especially after having a respectable 12-12-24 scoring line with the Calgary Flames in 2016-2017.

Chiasson’s season ended up having an odd quality to it, though.  He dressed for 35 of the team’s first 36 games and 47 of the first 51 games on the schedule.  But he got a sweater for only 14 of the last 31 games.  Not that game frequency seemed to matter; Chiasson still posted consistent, if modest numbers over the first seven of his ten-game segments.  He recorded points in all of them, and he recorded seven goals in his first five segments covering 46 games (a 12-goal pace for a player getting fourth line minutes – 12:17 a game over that span – is a pleasant number).

It is also worth mentioning that Chiasson closed with a rush, going 2-6-8 in his last 13 games. 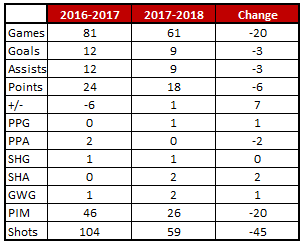 Odd Chiasson Fact… Alex Chiasson and Evgeny Kuznetsov were the only Capitals to record both a power play and a shorthanded goal this season.

Before the Caps hosted the New York Islanders on March 16th, Alex Chiasson dressed in only one of the previous seven games for the Caps, a somewhat forgettable seven minutes and change without a point in a 3-1 loss to the Kings in Los Angeles.  That he would get a sweater against the New York Islanders was a bit odd.  To that point in his career, Chiasson was 1-4-5, even, in 11 career games against the Isles.  And, the Caps were on a three-game winning streak after that loss in Los Angeles without Chiasson in the lineup, one of those wins coming the previous night as the Caps pounded tine Isles, 7-3 in Brooklyn.

Well, it worked.  The teams spent the first 27 minutes exchanging power play goals, a pair of Washington scores wrapped around an Islander tally.  Late in the second period, though, the Caps scored on a broken play.  Matt Niskanen skated through the right wing circle and fired a sharp angle shot at goalie Jaroslav Halak.  The shot was cuffed out into the low slot where Chiasson could not quite separate it from the poke check of Jordan Eberle for a solid shot.  The puck skidded out to Halak’s right where Niskanen was emerging from his loop around the back of the net.  He gathered the puck, stepped out for a better shooting angle, and using Chiasson as a screen beat Halak on the near side to give the Caps a 3-1 lead with just over two minutes left in the period.

Less than two minutes into the third period, Chiasson got a goal of his own.  With the Caps in the dying seconds of a power play, Jakub Vrana grabbed the puck inside the offensive blue line and circled to the cage.  However, with Adam Pelech hounding him, Vrana lost the puck off the toe of his stick as he was getting to the paint.  Halak paddled the stick away, but Chiasson was following up the play and after the loose puck clicked of the skate of a defender, he flicked it into what was now an open net.  It would be his first and only power play goal of the season, and, as it turned out, one of two game winning goals he had for the season.  He added an assist on a Vrana goal later, giving him a three-point night, his only one of the season.

April 5th was a night when “suck” was a team thing, but for Alex Chiasson, the matter was one of replacing a vowel, swapping out a “u” for an “i.”  The Caps blew a 3-2 third period lead when the Predators scored goals six minutes apart.  But by that time, Chiasson’s night was already over.  After skating just seven shifts and 4:10 over two periods, he finally came up sick on the bench.  He managed one shot, one hit, and one blocked shot in what would be his shortest stint in a game this season.

Postseason… Alex Chiasson did start regularly for the Caps as the playoffs began.  He was in the lineup for their first 15 games, in fact – all six against Columbus and Pittsburgh, and the first three games of the conference final against Tampa Bay.  What he did not get was ice time.  He averaged just 8:57 a game in those 15 contests before sitting out Game 4 against Tampa Bay.  He would dress for only one more game in the postseason, that in Game 6 against the Lightning.  He finished with a goal and an assist in his 16 games of action.

Nine goals in 61 games is probably more than folks might have thought they would be getting from Alex Chiasson when he was signed last fall.  But by the same token, he is an unrestricted free agent again, and what with the Caps having a lot on their plate in terms of personnel management, he might be on the move again.  He showed himself to be a capable fourth-liner who could chip in a timely goal here and there.  It might not be enough to earn another deal in Washington, but after a season in which he made the most of his opportunity, having been a member of a Stanley Cup champion, he will no doubt have value to remain in the NHL.

Posted by The Peerless at 8:20 PM No comments: