We are up to the eighth most memorable goal in our look at memorable goals in the history of the Washington Capitals.  This one was memorable, not just for the record set, but for the context in which it was scored. 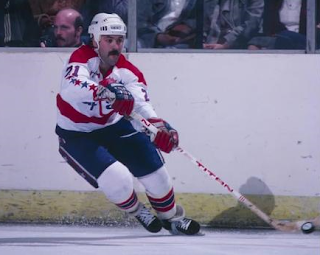 The first six years in which the Washington Capitals played hockey, success was a rare commodity.  Not once in six seasons did the Caps have a winning season, not once had they made the playoffs, and not once did they record as many as 70 standings points.  As they headed into their season finale of the 1980-1981 season against the Detroit Red Wings they did not have a chance to make it a winning season, but they did have a chance to reach the playoffs and hit 70 points for the first time.

For the Caps to reach the playoffs, they would have to win this game.  Losing it meant missing the playoffs for the seventh consecutive season.  Even winning the game would require help, though, that coming in the form of the Quebec Nordiques, who had to beat the Toronto Maple Leafs in the season finale for the Caps to leapfrog the Leafs with a win over Detroit.  It was the price to pay having gone 6-15-6 heading into Game 80.

The Caps had another record in sight in that final game, too, an individual record.  Dennis Maruk and Mike Gartner had already become the first Capitals in team history to record 40 goals in a season, breaking the team record of 38 set by Guy Charron in 1977-1978.  Both had an outside chance to do what no Capital had done before, record 50 goals in a season.  Both entered the game with 47 goals on the season.

The late Robert Fachet, then the Washington Post beat writer for the Washington Capitals, had a fine summary of the contest, a game marked by odd theater at the start involving a broken goalie skate, then a flurry of scoring in the first period than ended the competitive portion of the contest.

It was Maruk who contributed half of the goals in the 4-1 Capitals lead at the first intermission, drawing him to within a goal of the 50-goal mark.  The Red Wings got the only tally of the second period, then Mike Gartner scored his 48th of the season in the third period to inch closer to the 50-goal mark himself and put some pressure on Maruk.

With the Caps comfortably in front by a 5-2 margin, Maruk took a feed from Bob Kelly and converted it into the hat trick to become the first Capital to hit the 50-goal milestone.

Tim Tookey would score late for the Caps to complete the scoring in the 7-2 win, and then it was time to wait to see what was unfolding in Quebec.  The Nordiques scored midway through the second period of their contest against the Maple Leafs to draw to within 3-2.  The teams would play scoreless hockey over the rest of the second period and 19 minutes of the third period, only adding to the agony of Caps players and fans in Landover.  Bill Derlago ended the suspense with a last minute empty net goal for Toronto, sending the Maple Leafs into the postseason and the Capitals home for the seventh consecutive season without a playoff appearance.

The Caps did reach the 70-ponit mark for the season, the first time they did so, and they finished one point out of a playoff spot, as close as they ever came to that point of making the postseason.  Two Capitals – Mike Gartner and Dennis Maruk – went into the final game of the season with a chance to hit the 50 goal mark.  It was Maruk who would reach that magic number, but in the aftermath of missing the playoffs he could only say, "It doesn't mean anything."

In a fraternity of Capitals with 50-goal seasons that includes Mike Gartner, Bobby Carpenter, Peter Bondra, and Alex Ovechkin; Dennis Maruk was the first to “50.”  And that’s not nothing.  His hat trick goal in what was to that point the most important game in the history of the franchise makes Dennis Maruk’s 50th goal very memorable indeed.