A traditional spiritual song and hockey might not seem to go together, but Boyd Gordon’s back didn’t seem to get along much with hockey this season, either. Gordon missed 41 games in three different stints due to back injuries. It was very unfortunate for Gordon, for not only did he never really get much traction in cementing a place in the lineup, the statistics he did put up put him on a pace for one of, if not his best offensive season. His ten-game segments went like this… 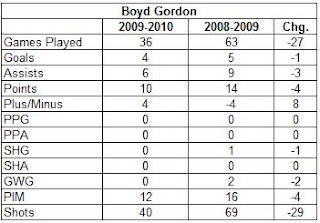 And it is the last part that was the problem. Gordon managed to dress for only 36 games this season, only eight in the 2009 portion of the season. He did not manage his first goal of the season until getting the first one in a 5-2 win over Ottawa on January 7th, the Caps’ 43rd game but only the tenth for Gordon on the year. All four of the goals he would score came in wins, and all four came in situations when the Caps were tied, behind one goal, or up one goal.

The frustrating part is that Gordon showed up in some odd, or what might strike Caps fans as odd for him, places. Looking at the numbers put together at behindthenet.ca, Gordon had a “goals against on ice per 60 minutes” number (2.01) that was roughly comparable to that of Detroit’s Pavel Datsyuk (2.06). Yes, Datsyuk does play against better competition (.036 to -.069), but Datsyuk is the two-time defending Selke Trophy winner, too.

Gordon’s “plus-minus on ice per 60 minutes” was seventh best among all centers playing in at least 30 games. OK, there is that quality of competition thing, again, but Gordon still managed to hold his own in the situations in which he played…well, to a point.

Although he had that seventh-best plus/minus number, he one of only two centers in the top 24 to have a lower plus/minus number on ice than off ice (and that assumes that Brooks Laich was a “center,” which for most of the season he was not).

Gordon continued to be something of a wizard in the faceoff circle. He did not qualify for inclusion among the league’s faceoff leaders for the season, but his 61.0 percent would have led the league over a full season (Scott Nichol led the league at 60.6 percent). In fact, in only eight of the 36 games that Gordon played did he finish below 50 percent on draws. But… he was only 35-34 on draws while shorthanded.

Gordon had some odd splits in his abbreviated season. He played 18 games against teams that made the playoffs this spring, and he finished 3-3-6, +4 in those games. He was a “minus” player against only one of those 11 playoff teams he faced (minus-2 against Philadelphia in two games). But then there was his finish against also-rans Carolina, St. Louis, Florida, Toronto, and the Islanders – 0-0-0, minus-6 in eight games.

He ended up dressing for six of the seven games against Montreal in the opening round of the playoffs, and the six games mirrored his season. One goal, the first one in a 5-1 Capitals win in Game 3. Five times in six games he finished 50 percent or better on draws (67.9 overall), although he was only 8-for-15 in shorthanded situations. He had no giveaways in 66 minutes of total ice time. He was eighth on the team in hits, which might not sound like much (he was credited with eight overall), but it was more than Jason Chimera had.

Gordon is at something of a crossroads. At 26, he has – in theory – a fair number of hockey years ahead of him. But over the last five years he has lost 83 games to injury. He is a good defensive player, to a point (he had the best goals-against on ice per 60 minutes on the penalty kill for Caps centers, but he still ranked 37th highest among 160 centers in that statistic), an efficient faceoff man. But he has provided little offense, and there is the uncomfortable feeling that Gordon may have come as far as he is going to go. And, there is the lingering issue of his durability. He is not likely to command a large contract (he is a restricted free agent), but with David Steckel’s $1.1 million contract over each of the next three years about to kick in, there might not be a spot for Gordon on this club.

Email ThisBlogThis!Share to TwitterShare to FacebookShare to Pinterest
Labels: Boyd Gordon, the peerless prognosticator, the tens 2009-2010 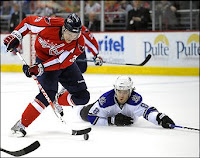 Theme: “What we hope ever to do with ease, we must learn first to do with diligence”

When first we saw David Steckel this season we thought that perhaps this was it; this would be the season when he added some offense to his abilities as a defender, penalty killer, and faceoff specialist. When last we saw him, we didn’t. Steckel did not dress for Game 7 of the Eastern Conference Quarterfinal series against the Montreal Canadiens. In fact, he dressed for only one of the last five games, a victim of numbers and perhaps the small, mobile character of the Montreal forwards he would have been asked to match up against. 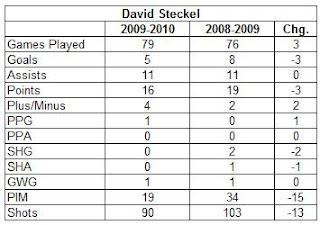 Looking at his ten-game segments, he evidenced better offensive production as the year moved along, but you also had the feeling that there was more there. Not that the Caps needed it, given the team’s finish at the top of the scoring heap. But Steckel recorded 13 fewer shots on goal for the season (about a quarter of a shot on goal a game).

He had reasonably good numbers against higher caliber competition. In 38 games against teams that made the playoffs, Steckel finished 3-5-8, plus-4; he was 2-6-8, even, against everyone else. Like a lot of Caps, he saved his best for the Atlantic Division, against which he was 1-4-5, even, in 20 games, registering at least a point against every team in that division except, perhaps curiously, the Islanders.

Perhaps one reason his offensive production did not improve was that he failed to score against Tampa Bay. In his previous two seasons, Steckel was 6-5-11, plus-7 in 12 games against the Lightning. He finished this season 0-1-1, even, in five games.

Steckel struggled some at home. In 39 games played at Verizon Center, he was 2-5-7, minus-3, the two goals coming despite managing 52 shots on goal. And, in what would be a harbinger of things to come, the only three games he missed during the season came in the post-Olympic portion of the season (he played in 17 of 20 games), a product of the crowded situation at forward following the trading deadline. It also was accompanied by his failing to hit the 50 percent mark in faceoff wins in eight of those 17 games that he did play.

The playoffs were something of an odd circumstance for Steckel. He played in only three of the games, two of which Montreal won. In those games, Montreal scored a total of 12 goals. Steckel was on the ice for one of them – the first goal the Canadiens scored in the series, a power play goal by Mike Cammalleri. Seven hits, four blocked shots, 18-13 on draws (58.1 percent).

Last year we said of Steckel, “Steckel has fewer than two full years of NHL game experience (155 games). This was only his second full season with the Caps, and in just about every statistical category you’d care to name, he improved on his first full season. He did show an ability to score at the AHL level, and one might hope that he continues improvement along those lines…” That improvement was very much incremental this year and uneven as well. The improvement in offense over the last part of the season gave way to an unremarkable playoff (0-0-0, plus-1 in three games, no shots on goal in 31:25 of playing time).

Last year at this time, one might have had a clear picture of Steckel’s role on the club moving forward – centering a checking line, being effective in the defensive end and in the faceoff circle, perhaps a bit of an improvement in the offensive end. But this year, that picture is cloudier. He took a seat for four of the last five games of the series against Montreal, which raises questions about where he is on the Capitals’ depth chart. But he has a three-year contract kicking in next year, and he is one of only seven forwards under contract for next season.

It was something of a “sideways” season for Steckel, but he has the ability to do the little things well. And those will be skills the Caps could use if they are to take the next step.