That Time of Year Comes Early...uh, Earli-ER for the Washington Capitals and Their Fans

If you are a Washington Capitals fan, you know that you should have your golf clubs in the trunk of your car by mid-April every year.  If there is anything as constant as the North Star, it is that the Caps will hit the links sooner than you would expect and certainly sooner than you would like.  This year, tee times come even earlier than we would have imagined as the Caps will miss the playoffs for the first time in seven seasons.

With that, we bring you a brief guide to golf from the perspective of the Caps fan...

It always helps to get limber after a long winter of sitting in your recliner throwing shoes at the TV over the fact that the bottom pair of defensemen you have been cheering for weren't exactly making the Hershey Bears a juggernaut when they spent big chunks of their seasons there.

Don't be late for tee times.  It annoys your foursome partners, it tears up the course, and it's...uh, hard on the equipment, if you know what I mean.

If you are still bitter over how the Caps' season went, make sure you get it all out of your system before heading to the course.  Otherwise, you're probably just going to embarrass yourself and waste a ton in greens fees.

If you are riding with your partner, and he shouts "OVIE ON A BREAKAWAY!" do not...repeat, do NOT take him up on the challenge.

Caps fans... don't ruin the enjoyment of other golfers at the range by trying this sort of "one-timer."  It's over, let it go.

Oh, look...George McPhee and Adam Oates are hitting the links, too.  Looks like how they steered the club this year.

Well, if you can't take the Stanley Cup to the mountain top, there's always golf.

Color us unimpressed.  A Caps fan, given the practice they get, should be able to do this backwards and blindfolded.

Looks like George and Adam are getting in an extra nine.

Metaphor for the Caps' season...

Thanks to the folks here, who put all these images and more in one place
Posted by The Peerless at 8:32 AM No comments:

The Peerless Prognosticator is ON THE AIR!!! -- Game 80: Capitals at Hurricanes, April 10th

Once upon a time, the Washington Capitals played in what folks called the “Southeast Division.” In this division were teams from exotic places like Miami, Atlanta, Tampa Bay, and Raleigh. The Caps used to win a lot of games back then because, well, folks in the Southeast are a whole lot better at college football than they are at hockey. The only thing they seemed to think ice was good for was to keep the drinks cold at the Florida-Georgia football game.

“Aren’t you being a bit harsh, cousin?”

Why do you say that, Fearless?

“Because two of those teams won Stanley Cups?”

Yeah, well, there is that…

The Carolina Hurricanes are one of those old Southeast Division teams that won a Stanley Cup once upon a time (2006, for those who do not remember). These days, though, they have endured harder times. A refugee of the Southeast that ended up in the Metropolitan Division, like the Caps, the Hurricanes are out of playoff contention, like the Caps, as they prepare to host Washington on Thursday night. This will be their fifth consecutive season to miss the playoffs, unlike the Caps, their longest absence from the post season since the club moved to Carolina from Hartford in for the 1997-1998 season.

It is a team that has been nothing if not consistently inconsistent this season:

One thing the Hurricanes have done reasonably well over those 12 games is convert power plays. They are 9-for-38 in that span (23.7 percent), have power play goals scored in seven of those games, and they were 4-2-1 when they did score power play goals.

On the other hand, the penalty killers have been doubly good. First, there is the volume of shorthanded situations faced. Carolina has just 31 such situations faced over their last dozen games (2.6/game). Three times they faced just one shorthanded situation. Second, there is the efficiency. Carolina is 27-for-31 in those dozen games (87.1 percent), although if you are looking for an ominous sign from the Hurricanes’ perspective, it would be that half the goals they allowed on the power play over their last 12 games came in their last contest, one in which they allowed two to the New York Rangers in a 4-1 loss.

If anything, Carolina has suffered problems that would be recognizable to Caps fans. Their Corsi-for and Fenwick-for percentage in 5-on-5 close score situations in their last 12 games are troublesome, but not awful (47.3/46.2). What is hurting them is a huge shot differential in those situations, more than four shots per 60 minutes of ice time in those situations. Even with a .930 save percentage in close score situations over the last 12 games, Carolina has found itself overall on the minus side in goals scored (21) and goals allowed (23), good enough to be mediocre, not bad enough to be awful. Very much like their season overall...like the Caps.

Here is how the two teams compare overall: 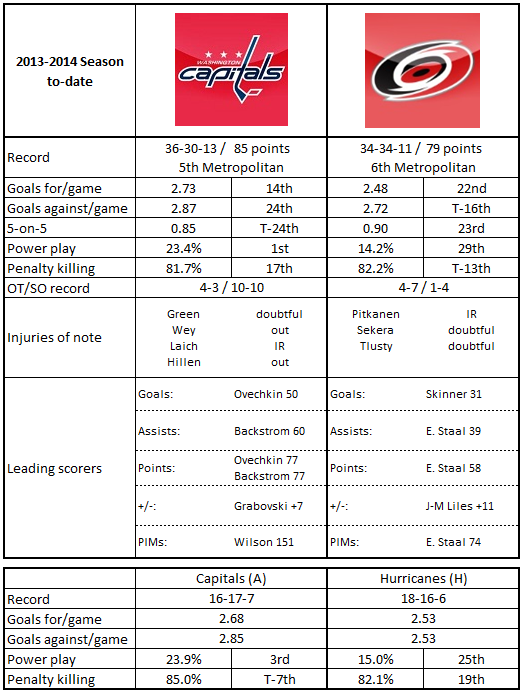 1. Carolina can be dangerous on the penalty kill. Through Tuesday night's games only three teams were in double digits in shorthanded goals, and the Hurricanes (10) happen to be one of them. Seven different Carolina players have at least one; three players – Eric Staal, Nathan Gerbe, and Patrick Dwyer each have two. Eleven Hurricanes have shorthanded points. They spread it around.

2. Carolina does reasonably well in one-goal games (18-9-11, a .618 points percentage and roughly a 100-point pace over 82 games). Multi-goal decisions are another matter. Carolina is 16-25 in games decided by two or more goals.

3.  In their last dozen games The Brothers Staal (Eric and Jordan) are a combined 5-6-11.  That would be a really good scoring line for one or the other, but not both.  Add in Alexander Semin’s 3-0-3 in those same dozen games, and that is 14 points in 12 games out of three players that comprise $21.3 million of the salary cap.  Jordan Staal has had an especially rough time of it lately, coming into this game without a point in his last seven games.

4.  Carolina might be a team in a goalie transition.  The question is, transition to what?  Three goalies have dressed for the Hurricanes this season, three Hurricane goalies have logged more than 1,000 minutes.  Anton Khudobin has received most of the work: 34 appearances and 1,959 minutes.  He happens to be seventh in the league goals against average (2.14) and second in save percentage (.931).  Two of them came earlier this year against the Caps.  He is 2-0-0, 2.47, .932 in those games.

5.  Carolina does a fairly good job of staying close in games.  They are 14th in the league in total ice time spent in 5-on-5 close score situations.  But they are not very successful in keeping games close, at least in terms of taking advantage by outscoring their opposition.  Their goals scored/goals allowed is a minus-14 for the season.  Only seven teams are worse.

1.  There are sixteen players who have ten or more points for the Caps this season.  Four of them will not skate in this game.  Steve Oleksy (10) is in Hershey, Brooks Laich (15) and Mike Green (38) are injured, and Martin Erat (24) is in Phoenix.

5.  Only three teams in the league have a worse shots-for percentage at even strength than the Caps (46.7 percent): Edmonton, Toronto, and Buffalo.

Jeff Skinner has been rolling merrily along lately, posting points in seven of his last nine games (5-3-8), continuing a certain late-season streakiness. Starting March 7th he had a four-game points streak, then went four games without a point before embarking on this latest scoring run.  Skinner, the 2011 winner of the Calder Trophy as the league’s top rookie, is tied for the lead with Edmonton’s Jordan Eberle in his 2011 rookie class in career goals with 95.  His 31 goals to date this season ties the career high he set in his rookie season.  In 20 career games against the Caps he is 7-10-17.

Jason Chimera, who is a member of arguably the Capitals’ most effective line since the Olympic break if not the season, has had a dry spell lately. He has been sitting on the cusp of a new career high in points for five games now.  His goal against Boston on March 29th brought him to 14 goals and 38 points for the season, the latter being one off his career high of 39 set with the Caps in 2011-2012.  That goal against the Bruins is his only point in his last nine games over which the Caps are 3-3-3. His secondary scoring, part of the third line (with Eric Fehr and Joel Ward) that has been just about the best thing for the Caps this season, is an important part of the Caps’ success.  That third line has a total of 49 goals this season.  Quite an accomplishment if they can get their own “50 goal” season.

1.  Be strong.  Yeah, it’s over, but there is something to be said for being professional and playing the right way.

…that’s pretty much it.

We are at the end.  The team that was purportedly built to be a playoff team for a decade or more sees its streak of post-season appearances end at six seasons.  Truth be told, this club has not been on a short list of contenders since they were dumped in the first round of the 2010 playoffs (even though we picked them to win the Cup this season).  The last three seasons they have had to rely on fast finishes just to make the playoffs.  In 2011-2012 they finished 10-4-2 to tie Ottawa in points and grab a seventh-seed.  In 2012-2013 they went 9-1-1 in April to take the Southeast Division’s only berth in the playoffs while finishing tied for fourth in points in the Eastern Conference.  This year, that finishing kick never came.  We are left thinking a little humility is needed.  Our prognostications were not all that great, and this club, well…