The Peerless Prognosticator is ON THE AIR!!! -- Game 18: Capitals at Sharks: November 20

The Washington Capitals make the turn on their four-game western road trip with their third game on the journey, facing the San Jose Sharks on Saturday at SAP Center.  The Caps enter the game on a six-game points streak (5-0-1), while the Sharks are 2-4-1 in their last seven contests and losers of their last two games on home ice (0-1-1).

Dahlen is an interesting player.  He is one of ten rookie skaters to dress for the Sharks this season and leads the group in scoring (7-2-9).  Those seven goals are tied for the team lead with Tomas Hertl and tied for the lead among all rookies in the league.  His shooting percentage of 22.6 is second among all Sharks skaters and leads all NHL rookies having recorded at least ten shots on goal.  If the name is familiar, it should be.  He is the son of former Capital Ulf Dahlen, who played in 14 seasons, three of them with the Caps.  Dahlen’s scoring has dropped off a bit since going 6-2-8, plus-5, in his first 11 games.  He had a three-game streak without a point (his longest of the season) before snapping it with a goal in his last game, the only Sharks goal in a 4-1 loss to St. Louis on Thursday.  This will be his first appearance against the Caps.

Goaltending has been hit and miss for the Sharks.  The “hit” is the performance of James Reimer.  His win-loss record of 4-3-1 is modest, but his underlying numbers – 1.98 goals against average and .938 save percentage – are not.  Reimer has danced on the dividing line between starter and back-up over the course of his career, his 21,424 career minutes ranking 16th among 113 active goaltenders.  He has never dressed for as many as 50 games in a season, but he has not dressed for fewer than 30 games in a non-abbreviated season.  While his numbers this year sparkle – career bests in goals against average and save percentage – he has split 16 starts with Adin Hill (4-4-0, 3.11, .894, one shutout).  Reimer has cooled off of late but still putting up good underlying numbers, going 1-2-1, 2.46, .926 in his last four appearances. 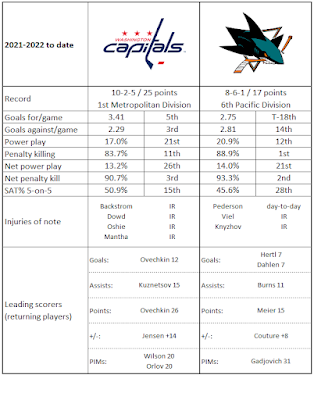 3.  San Jose is tied for the fourth-worst goal differential on power plays (plus-6).

4.  The Sharks have the second-best goal differential on penalty kills (minus-3, second to Colorado at minus-2).

5. It is all or nothing for the Sharks when leading or trailing after two periods – 6-0-0 when leading after 40 minutes, 0-7-0 when trailing.

3.  Seventeen games in, and the Caps are still the only team in the league without a major penalty.

Some players announce their presence with flashy numbers, other toil effectively, but in anonymity.  The latter might describe defenseman Trevor van Rimesdyk’s season to date for the Caps.  He is the only one of six defensemen to dress for the Caps without a goal, but he does have six assists, second among defensemen to John Carlson (14).  He is a plus-6, the third-best rating among defensemen.  He is not a big hitter (last of the six defensemen with seven), but he is tied for the lead among blueliners in blocked shot (27, with Martin Fehervary).  His 1.19 takeaways per 60 minutes is second among the group (John Carlson: 1.51).  His on-ice shot differential at 5-on-5 of plus-33 leads the team, and his being on ice for 212 shot attempts at fives is fewest among the defensemen.  His 2:15 in shorthanded ice time per game ranks second (Jensen: 2:21).  In 17 games played to date, he was a minus player only twice.  Van Riemsdyk is 0-3-3, plus-7, in 10 career games against the Sharks.

San Jose has struggled at times on offense this season, including on home ice where they scored 12 goals in their last five games at SAP Center.  On defense, they have been strong where the Caps have been weak, posting a league-best 94.1 percent penalty kill on home ice, while the Caps are 31st in road power play (5.9 percent).  If the Caps can solve the Sharks’ penalty kill, it should be a successful night.

Posted by The Peerless at 3:49 PM No comments: