Countdown to Opening Night by the Elements: Number 22

The new week starts with Fearless taking a look at a new element, this one being number 22 in the periodic table…

So there he was.  William Gregor, taking a break from tending his flock as a clergyman in Cornwall, took advantage of a nice day in 1791 to indulge his hobby of geology.  He was walking along a stream in a nearby parish and came upon a deposit of black sand.  And (you can’t really make this up), he had a magnet and thought, “what the heck?” and tested the sand with it.  Lo and behold, the sand was attracted by the magnet.  He took some back to his church/geology lab and produced from it two different oxides.  One was iron oxide, which he knew about.  The other was a white metallic oxide with which he was not familiar.  That was as far as Gregor would get though.

Meanwhile, over in Austria, Franz-Joseph Müller von Reichenstein, was discovering the same thing at about the same time.  He did not know what he had, either.  It was up to a Prussian chemist -- Martin Heinrich Klaproth – to discover four years later just what the other two missed.  What he had was a new element that he named.  And he was not about to mess around.  He named it for the Greek gods that were descendants of the earth and sky, immortals of unimaginable strength and endurance.  He named it “Titanium” for the Titans.

Titanium is well-named.  It is universal, being present in meteorites, the sun, and in lunar rocks, in addition to its presence on earth.  It is a low density metal, but one of high strength.  It is extremely resistant to corrosion.  It is resistant to acids, chlorine gas and chloride solutions. It is resistant to high temperatures.

It does not have a natural role in human physiology, but its qualities make titanium uniquely suited to high-performance applications in manufacturing: propeller shafts and boat hulls (it was used in the manufacture of submarines, for example), airframes and engines, missiles, and spacecraft.  It has medical applications, such as in prostheses and orthopedic implants, and dental instruments and implants.  It is used in automotive production where light-weight, high-strength materials are important.  It shows up in sporting equipment (even hockey, in face masks).  It even has promise as a critical element in long-term nuclear waste storage.

Titanium…a durable, high-strength metal used in high-performance, critical applications that is resistant to stress, temperature, corrosion.  Sounds like a defenseman who is durable, eats up critical minutes, performs well in stressful situations (like tournaments or playoffs), who can be relied upon in a variety of situations.

Titanium…the “John Carlson” of elements of the periodic table.

Posted by The Peerless at 11:11 PM No comments: 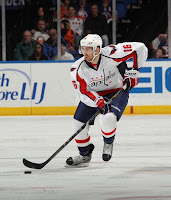 Theme: “There are no second acts in American lives.”
-- F. Scott Fitzgerald

A decade is an eternity in an athlete’s career, and much can happen – the good, the bad, the unexpected.  Eric Fehr has had his share of ups and downs and unexpected turns in his career over the last decade.  At this time ten years ago, Fehr was a newly minted first round draft choice of the Washington Capitals, about to embark on what would be his third season with the Brandon Wheat Kings in the Western Hockey League.  It was one in which he would finish with 50 goals in 71 games.  He would follow it up with 59 goals in the 2004-2005 season with Brandon and establish himself as a potential goal-scoring winger with the Capitals.

In the 2005-2006 season Fehr spent most of his time with the Capitals’ affiliate in the AHL, the Hershey Bears, getting a cup o’ coffee along the way (11 games) in Washington along the way.  He made himself a hero of sorts when he scored the game-winning, series-clinching goal in the Calder Cup semi-finals against the Portland Pirates.  Hershey would go on to win the Calder Cup.

Fehr had what might have been a breakout year in 2009-2010 when he posted 21 goals in 69 games, but that would only be the high-water mark of his career with the Caps.  After finishing the 2010-2011 season with ten goals in 52 games, he was traded to Winnipeg for Danick Paquette and a 2012 fourth round draft choice.

That might have been the end of it, especially when Fehr could manage only two goals in 35 games with the Jets, once again battling injuries that stifled any momentum he could generate for his game.  However, the 2012 lockout came.  Fehr, like many of his NHL counterparts, took to playing in Europe.  Fehr signed on with HPK in Finland.  It served to rejuvenate his game and his career.  Thirteen goals in 21 games was enough to persuade the Caps to offer Fehr a contract as a free agent, a deal the player signed in January 2013 on the eve of the new, late-starting NHL season.

Fehr recorded a respectable nine goals in 41 games, despite little power play time (0:49/game) and primarily third line time at even strength.  What highlighted his year were two game-winning goals, both in overtime, and both against the Boston Bruins.  The first of them was nominated as a “play of the year” by TSN Canada…

For the first time in what seems like a long time, Eric Fehr has a place he can call his own that does not resemble the dog house in which he often seemed to inhabit under former coach Bruce Boudreau.  He will almost certainly start the season on the right side of the third line.  The Fun Fehr Fact from last season is that the Caps were 8-0-0 in games in which Fehr recorded a goal (he had two in a 4-3 win in Tampa on Valentine’s Day).

Fehr’s evolution as a hockey player has made him, if not exactly a Selke candidate, a respectable and responsible player in his own end.  Last season, among forwards playing in at least 20 games, Fehr was 77th of 395 forwards in goals scored against/on ice per 60 minutes (source: behindthenet.ca).  He has been consistently in that range over the past four seasons.

And, in the little things make a difference category (even if they are arbitrary), Fehr had the best takeaway to giveaway ratio on the team last season (23 takeaways, 9 giveaways).  Fehr has the makeup to be a solid two-way forward for the Caps.  Not, perhaps, a top-goal scorer any longer, but a reliable 15-20 goal scorer.  Not, perhaps, a stopper on defense, but a player who will give a solid and consistent effort in that area.

Have we been here before?  He has had what looked like a breakout year once before, then had 12 goals in his next 87 games.  He has come back from injury before, only to be injured again.  Last year was his first season in which he was even on a pace for a 70-game season.  Those 15-20 goals might depend on his getting 75 or more games, given the way the Caps look like they are going to use him.  You want to take that bet, cuz?

The Big Question… Can Eric Fehr be a reliable source of offensive support?

Put another way, is he past the oft-injured phase of his career.  Fehr has settled into a role for the Caps, one that will likely find him getting 12-14 minutes a night (he averaged 13:22 last season), primarily on evens, although he will get some second unit work on both power play and penalty kill.  If you look at last year’s performance of those forwards who played in at least half of their team’s games and averaged ice time up to a minute more or less than Fehr’s average, Fehr was the seventh most productive goal-scoring forward among 70 players.  He has the capacity to provide some punch from the third line.  The lingering question will be whether he is on the ice often enough to do so.

Eric Fehr has taken a long road since he was taken 18th overall in the 2003 draft.  It has not been butterflies and unicorns.  However, his persistence was rewarded with a two-year contract extension that will pay him $1.5 million a year for the next two seasons.  Looking at capgeek.com information on contracts, if you look at Fehr’s salary cap comparables who: a) are 25 or older, and b) have deals starting in 2013, five players emerge:   Matt Beleskey, Trevor Lewis, Nate Thompson, Drew Miller, and Ryan Jones.  At a minimum Fehr compares favorably with the others in terms of his offensive production last season and over their respective careers.

The 2013-2014 season is the next scene in Fehr’s second act with the Washington Capitals.  So far, he has given evidence of contradicting Fitzgerald’s observation about such things in American lives.  Then again, Fehr is Canadian.


photo: Bruce Bennett/Getty Images North America
Posted by The Peerless at 9:37 AM No comments:

Countdown to Opening Night by the Elements: Number 23

Vanadium is an element that has had a hard time becoming, well, an element.  An explanation is in order.  Vanadium is not one of those metals that have found uses in places dating back millennia.  It does not even exist on its own in nature, only in compounds.

One of those compounds was discovered by Andrés Manuel del Río, a Spanish-Mexican scientist, who subjected a substance he called “brown lead” to processes that produced vanadium compounds.  “Vanadium” was not the name he chose for the element, though.  He called it erythronium (from a Greek word for “red”) for the red color the compound took on with heating.

One might have thought that this was the start of the road to “element” status for vanadium/erythromium.  Alas, it was not.  Other scientists convinced del Río that what he had was not a new element, but merely chromium (you know...the "Martin Erat" of elements).

It took another 25 years for Nils Gabriel Sefström (another Swedish chemist…boy, these guys were good) to isolate and confirm vanadium as an element.  It was Sefström who would give the re-discovered element its name.  It has something to do with Norse mythology and the goddess of love, beauty, and fertility (“Vanadis,” or in the original, “Freyja”).  It would be the first element to start with the letter “V,” but we just wonder if Sefström was trying to get over a bad breakup.

Anyway, even with its new “element” status, folks were not exactly storming Sefström’s lab to find vanadium to put to use.  Even today, more than 80 percent of all vanadium compounds are used in steel-making.  Most of the remaining amount produced is used in other metallurgical applications and in manufacturing sulfuric acid.  A small amount of it shows up in ceramics, glass coatings, and in pigments.

It has almost no biological importance, except in some marine environments (among algae, sea squirts), in some bacteria and fungi, and in trace amounts in some rodents and chickens.

You could say that the discussion to this point has put vanadium in a bad light.  We prefer to think of vanadium as one of those hardy, if unsung elements.  It is relatively young in its discovery, not like iron or copper.  It makes modest contributions from its place in the periodic table, and does so in combination with other elements.

It might be something like a young defenseman who took a little while to make the big show, who made modest contributions and played an unsung role when he was called up to the NHL.  Then, he was sent back down to the minors.  However, this year he got a little bit more of a chance, even though you would never think he really played in 25 NHL games last season.

Vanadium… the “Tomas Kundratek” of the periodic table of the elements.