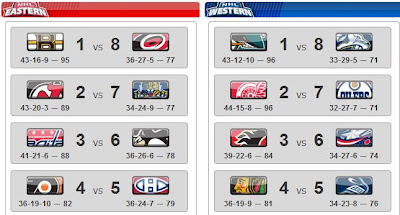 Posted by The Peerless at 5:23 PM No comments:

Email ThisBlogThis!Share to TwitterShare to FacebookShare to Pinterest
Labels: playoffs 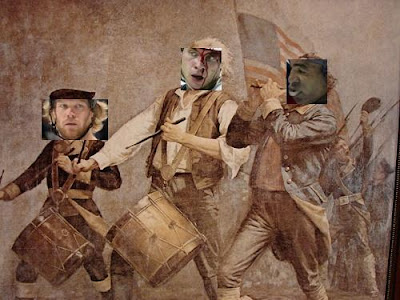 "We knew they went to war for us, so our guys took it upon themselves to go to war for them..."
-- Capitals coach, Bruce Boudreau, commenting on the team's response to the efforts of Donald Brashear, Matt Bradley, and John Erskine.

Nashville goalie Dan Ellis, describing the save he made on Alex Ovechkin with 4:22 in regulation to prevent the Caps from taking a late lead.
It was an excellent performance by Ellis overall.
Posted by The Peerless at 9:55 AM No comments:

One wondered if they’d ever win again, but Sergei Fedorov put a happy end to the misery of a four-game losing streak by scoring 140 seconds into overtime to give the Capitals a 2-1 win over the Nashville Predators in a game that was just the thing for those of you nostalgic for those 1990’s kinds of results.

It was an entirely predictable kind of game, from the grinding sort of style the Predators play to the frustratingly frequent shooting with little result from the Capitals. But there were all sorts of nuggets in this one…

- In the Tribute to the ‘90’s theme, three fights. In one of them, Donald Brashear was sent to the canvas by a straight left from Wade Belak. It might strike Caps fans as the sun stopping in the sky to have witnessed that result, but it was the classic instance of the “puncher’s chance” coming to fruition. Belak got the good fortune of timing – his left was timed just as Brashear left an opening. Belak would later take on John Erskine in what seemed a draw.

- The fight sandwiched between the two, between Matt Bradley and Jordin Tootoo, was decided by deft use of the helmet by Tootoo, who employed it to open a nasty gash on Bradley’s nose.

- It was reminiscent of a 1990’s game in another respect. The Caps outshot the snot out of the opponent (44-28) and had little to show for it.

- 92 attempts. Nine-two. In 62:20. There are a lot of guys sore this morning…Predator goalie Dan Ellis’ hips must feel like Cream of Wheat after butterflying all night…Alex Ovechkin’s shoulders probably could use some Ben-Gay for all the rotation they took launching 17 attempts. Alexander Semin probably has carpal tunnel problems in his wrists after getting off 19 (that’s not a misprint) attempts.

- The only guys not to attempt a shot for the Caps were Matt Bradley, but he played less than five minutes and probably couldn’t see well enough to find the puck and shoot it with the swollen face he must have had, and Donald Brashear, whose evening ended early when his knee buckled in his fight with Belak.

- How does a team dominate the scoresheet to the degree the Caps did – 44-28 in shots, 92-46 in attempts, 39-30 in faceoffs – and not blow a team out? Well, perhaps it is that in an important respect, the Caps are still mired in a horrific slump. The points were registered by Ovechkin, Semin, Backstrom, Kozlov, and Fedorov. There are five of your top-six forwards. Meanwhile, Steckel, Gordon, Fehr, Laich, etc., were shutout. The lower half of the forward lines did register 19 shot attempts, which is in itself encouraging. But if they don’t start potting the occasional goal, the Caps are going to lurch from win to loss, depending on the young guns even more than they do already.

- The happenin’ guys…Shea Weber, David Legwand. They were out there for all of the game’s three scores.

- So were Tom Poti and Viktor Kozlov.

- Jose Theodore pitched what amounted to a shutout, stopping the last 24 Predator shots in the last 61:30 of game time. He had his best game in a month.

- Today’s interesting time-on-ice number belongs to Boyd Gordon. No Cap who wasn’t involved in a fight had less even-strength time than Gordon (8:08). It wasn’t even close, really. Gordon had more than three fewer minutes than the next lowest total (David Steckel: 11:15). We’re not sure what this means, other than Gordon’s role at this point seems to be morphing into “penalty killing specialist.” He had more PK time than any other Cap forward, and only five fewer seconds than Tom Poti.

Nashville might have been a good tune-up for what awaits the Caps on Thursday. The Predators are a team that can smother an opponent all over the ice. That the Caps got off those 92 attempts is rather remarkable, given the pace the Predators seemed to want to set. And, the Predators have elements of physical toughness (not just of the sort displayed by Belak and Tootoo) that the Caps will face. Washington is likely to get more skating room against the Flyers than they had against Nashville – the Predators’ defensemen are a level better than Philadelphia’s – but Philly will hound the Caps, hit them early, and hit them often.

The Caps won, beat a Western Conference team, and stood up to an opponent looking to use a physical edge. All three have been rare lately. That the Caps succeeded serves as more evidence that they are emerging from their slump. They’re not out of the woods yet. We’ll have a clearer picture of that at around 9:30 Thursday night.